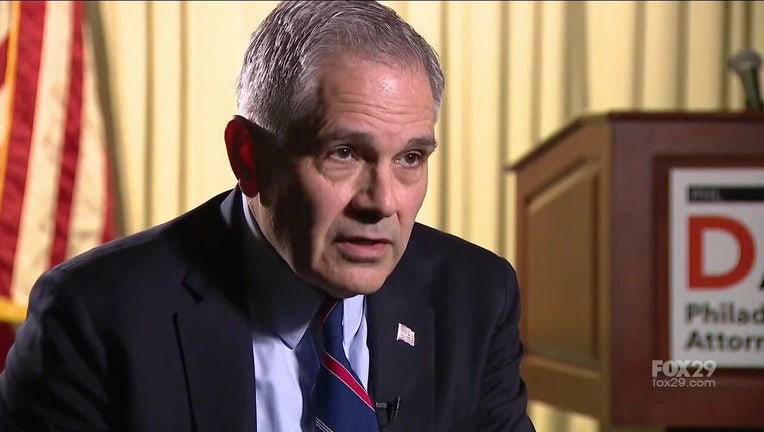 PHILADELPHIA - A group of Pennsylvania lawmakers has voted to impeach Larry Krasner from his role as the Philadelphia District Attorney.

Members of the House Judiciary Committee voted 14-8 in favor of House Resolution No. 240, which calls for Krasner's impeachment, on Tuesday morning.

The committee accused Krasner of enforcing policies that have added to rising violent crime in Philadelphia, with several GOP lawmakers citing what they call misbehavior and mismanagement of his office.

While the three Republican lawmakers who originally announced the plan to draft articles of impeachment against Krasner did not represent the Philadelphia area, the 22-page resolution gained support and a sponsorship from Rep. Martina White, who serves constituents of Philadelphia.

White accused Krasner of "dereliction of duty and despicable behavior" and said he runs his office with a "staggering amount of dysfunction."

Krasner, a two-term Democrat, has continued to push back against the House committee, its proceedings and calls to resign, telling FOX 29 that he believes the effort to remove him is political.

"Philadelphia voted for me overwhelmingly because they want what we are doing," Krasner said on Good Day Philadelphia. "When you bring change, the reality is that there are certain entities who don't want change."

Philadelphia DA Larry Krasner defends his policies, says he will not resign

Philadelphia District Attorney Larry Krasner joined "Good Day Philadelphia" to discuss the violence plaguging the city and impeachment efforts against him. Krasner doubled down on his policies and says resigning is not on his mind.

Krasner has garnered support from the American Civil Liberties Union of Pennsylvania.

"As we've been saying since the start of his sham impeachment effort targeting DA Krasner, this is both a clear political attack on a duly elected official and an effort to disenfranchise the voters of Philadelphia who reelected Mr. Krasner just last year. The election last week was a clear rejection of the type of fear-mongering and tough-on-crime rhetoric that those leading the impeachment effort continue to sell. The people aren't buying it," ACLU of Pennsylvania legislative director Elizabeth Randol said. "Democracy won last Tuesday, but it seems like Republicans in the state House must have missed the news. This impeachment effort is anti-democratic on its own, but when you consider that those leading this effort rushed to hold a vote even as the balance of power remains undecided in the state House is remarkably cynical."

Krasner's office responded to the committee vote by publishing a series of statistics about the office's handling of crime.

The office did highlight a backlog of open cases, attributing it to court closures caused by the COVID-19 pandemic and said the backlog is contributing to overall conviction rates.

Krasner's office says attacks on large cities and progressive district attorneys distracts from the need to focus on gun violence across the state, with the office saying Chester, Allegheny, Berks, Lehigh and Luzerne counties saw a larger increase in homicides from 2019 - 2021 than Philadelphia.

Now that the vote on the impeachment resolution has been cast, the measure moves to the state House floor for another round of voting.