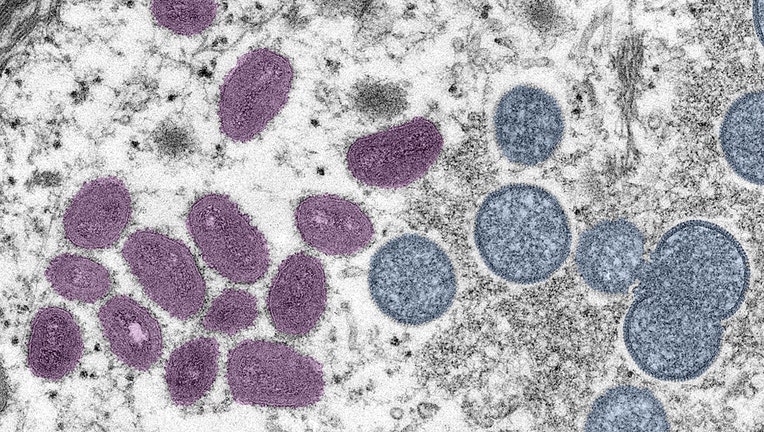 PHILADELPHIA - Health officials in Philadelphia are investigating the city's second probable case of monkeypox after a resident tested positive for orthopoxvirus.

The Philadelphia Department of Health on Wednesday said the Philadelphia resident was seen at a clinic outside the city and there it not currently a known connection between the probable case and the city's first case of monkeypox.

The health department was informed of the probable case on Tuesday morning, according to a release. Since the resident tested outside the city, the Pennsylvania Department of Health is coordinating the report and testing.

Monkeypox? What is it?

According to officials with the Centers for Disease Control and Prevention, monkeypox is caused by a virus that is in the same genus of viruses that causes smallpox.

Monkeypox, according to the CDC, was first discovered in 1958, following two outbreaks of a pox-like disease in colonies of monkeys that were kept for research.

The first human case of the disease was recorded in a country now known as the Democratic Republic of Congo in 1970, during a period of intensified effort to eliminate smallpox. Since then, the disease has been reported in people in several central and western African countries. Cases have also been reported in the U.S., as well as a number of Asian, Middle Eastern, and European countries.

What are the symptoms of monkeypox?

According to CDC's website, it takes usually seven to 14 days from the time of infection for a person to start feeling symptoms of the disease, but the incubation period can also range from five to 21 days.

The illness, according to the CDC, begins with:

CDC officials say within one to three days after the appearance of fever, the person infected will develop a rash, often beginning on the face then spreading to other parts of the body. The rash will eventually dry up and fall off.

According to the World Health Organization, symptoms of monkeypox typically last two to four weeks.

Can people die from monkeypox?

According to WHO, the fatality rate for monkeypox varies between zero and 11% in the general population. The rate is higher among young children.

How does it spread?

CDC officials say monkeypox is spread when a person comes into contact with the virus from an animal, human, or materials contaminated with the virus.

"The virus enters the body through broken skin (even if not visible), respiratory tract, or the mucous membranes (eyes, nose, or mouth)," a portion of the website reads.

According to Massachusetts health officials, the state's monkeypox case involved an adult man who recently traveled to Canada. Since then, monkeypox has also been detected in ten U.S. states, including Pennsylvania.

In Portugal, officials with the country's General Directorate for Health said they are investigating 15 suspected cases of monkeypox that were all identified in May, in the area around Lisbon.

Great Britain, meanwhile, had previously reported three cases of monkeypox, two involving people who lived in the same household and the third involving someone who had traveled to Nigeria.

Have we seen monkeypox cases in the U.S. before?

According to the CDC, the first-ever monkeypox case in the U.S. happened in 2003, when 47 confirmed and probable cases were reported from six states: Illinois, Indiana, Kansas, Missouri, Ohio, and Wisconsin.

"All people infected with monkeypox in this outbreak became ill after having contact with pet prairie dogs. The pets were infected after being housed near imported small mammals from Ghana," read a portion of the website.

According to officials, investigators later determined that an animal shipment from Ghana to Texas in April 2003 introduced monkeypox into the U.S.

Following the 2003 outbreak, two human monkeypox cases were reported in 2021. In both cases, the person infected came to the U.S. from Nigeria.

CDC officials say monkeypox does not occur naturally in the U.S.

What can I do to help prevent getting monkeypox?

CDC officials have the following advice for people in order to prevent a monkeypox infection. They include:

Are there treatments for monkeypox?

Officials with the CDC say there is currently no proven, safe treatment for monkeypox.

Is there a vaccine for monkeypox?

According to the CDC, a vaccine called Jynneos, also known by the names Imvamune or Imvanex, has been approved by the Food and Drug Administration for preventing monkeypox.

According to the website of the Military Health System, Jynneos was approved by the FDA in September 2019. In a statement issued by Bavarian Nordic, the vaccine is based on a virus that is incapable of replicating inside a human body, but still able to trigger an immune response.

Officials with WHO stated, however, that the vaccine is not widely available.