Prior to coming to Philadelphia, Kristen was a sports anchor and reporter for KEZI-TV in Eugene, Oregon. She covered the Oregon Ducks, Oregon State Beavers and Portland Trail Blazers, traveling to bowl games, the Final Four and NBA Playoffs.

Kristen is a graduate of the University of Southern California where she majored in Broadcast and Digital Journalism with minors in Sports Media Studies and Business Administration. During her time at USC, Kristen served as an on-air reporter for Scout.com, covering USC football. She also interned for KABC-TV, Bleacher Report and NBC Olympics for the 2012 Games in London. Kristen also played Club Tennis at USC.

Born and raised in San Francisco, Kristen credits her love for sports to her father's football lessons at the dining room table. She enjoys cooking, singing, golfing, playing tennis and scuba diving.

The Philadelphia Eagles will once again be starting someone new along their offensive line when they take on the Baltimore Ravens on Sunday.

Eagles' Head Coach Doug Pederson says he is "thrilled to death" by Jason Peters' decision to move back to left tackle.

While Eagles guard Brandon Brooks will not be suiting up for the team this season, he is still finding ways to staying in shape and help recover from his injury with the help of his trainer.

It was never a secret the Carson Wentz contract extension with the Eagles would get done. 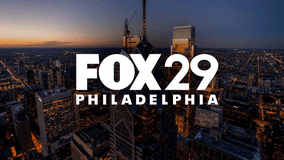 There's no question this has been an exciting Sixers team to watch this year but with just three games to go before the playoffs... I'm not sure what version of this Sixers team we're going to see.

The Flyers made a big impact on the ice at the Skate Zone in Voorhees.