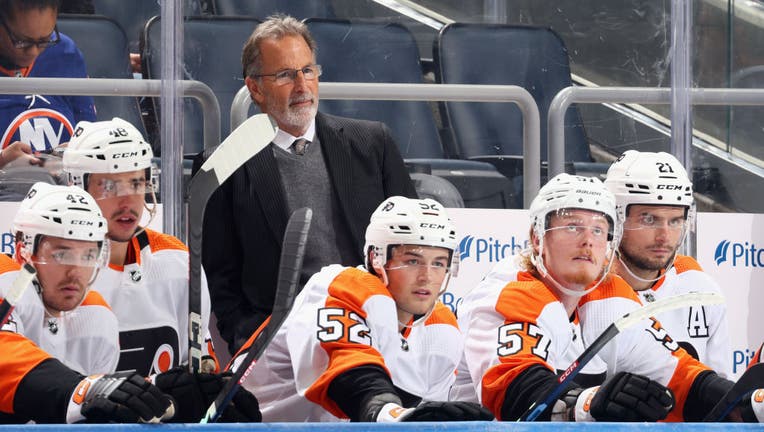 PHILADELPHIA - The coaching carousel spun a little faster than usual across the NHL, meaning nearly a third of the league will have someone new behind the bench this season. And not just bottom-feeders making changes.

Ten teams go into the season next month with a new coach, from Presidents’ Trophy-winning Florida and perennial playoff-contending Boston to rebuilding Chicago and San Jose.

John Tortorella will try to whip Philadelphia into shape, Bruce Cassidy is tasked with getting Vegas back to the playoffs and Derek Lalonde takes his two Stanley Cup rings as a Tampa Bay assistant to his new challenge with the Detroit Red Wings.

Philadelphia players knew they were in for some changes when Tortorella was hired, so they asked Cam Atkinson, who spent six years playing for the no-nonsense coach in Columbus.

"I keep telling them like he’s a guy that’s going to change the whole dynamic of this organization," Atkinson said.

Tortorella has not shied away from saying a culture change is needed after a last-place finish and a decade with one playoff series win. There is likely not much he and players can do this year about a Cup drought that dates to 1975, but they can start with maddeningly inconsistent stretches of games that have plagued the Flyers for years, no matter the roster.

The Panthers were the league’s best team in the regular season last year but struggled in the playoffs before losing in the second round to cross-state rival Tampa Bay in five games. That was enough for general manager Bill Zito to decide to move on from interim coach Andrew Brunette and hired seasoned veteran Paul Maurice.

The expectation is to get back to the playoffs and compete for the Cup, and having Maurice at the helm was one of the factors that made power forward Matthew Tkachuk pick Florida as his trade-and-sign destination.

"He’s got high hopes for our team," Tkachuk said. "He sees us playing in a certain way that’s going to make us successful. And he’s done it. He’s been around the NHL a long time, been a very successful head coach and somebody that I’m really looking forward to working with."

Bruins GM Don Sweeney fired Cassidy after a seven-game loss to Carolina in the first round despite Boston's sixth consecutive playoff appearance.

Vegas had already fired Peter DeBoer, making him the scapegoat for an injury-riddled fall from the top of the Western Conference that ended with the team's first playoff miss in five years of existence. The Golden Knights quickly turned to Cassidy, who like Maurice brings experience and gravitas to a franchise with championship aspirations.

"I think we’re very fortunate as an organization to have him as our coach," center Jack Eichel said. "Every single person I’ve spoke to about them, they said the same thing: that he’s got a really, really great knack for the game and to able to make adjustments and he understands things. Very, very competitive -- wants to win, has won a lot of hockey games over the last few years."

The Bruins replaced Cassidy with Jim Montgomery, a hockey lifer getting a second chance after being fired by Dallas in December 2019 for inappropriate conduct. Montgomery sought and received help at a rehab facility and got a big endorsement from the staff with St. Louis, the team he was working for as an assistant.

"He’s a winner," Bruins goalie Jeremy Swayman said. "I think guys are going to thrive on that energy."

The Stars completed the circle by hiring DeBoer, who has coached two teams (New Jersey in 2012 and San Jose in 2016) to the final and is on his fifth stop around the league.

"This is a tough league and it’s a tough one to coach in and you have to be able to handle situations," GM Jim Nill said. "I know Pete can do it."

Lane Lambert served as an assistant under Barry Trotz with Nashville, Washington — where they won the Cup together — and the Islanders. When Trotz was abruptly fired after New York missed the playoffs for the first time in his four seasons on the job, his right-hand man got the gig with his endorsement.

Longtime executive Lou Lamoriello thought his team needed a new voice. But Lambert isn’t that new, and his familiarity with the Islanders keeps some continuity.

"Barry was great for our team, and having Lane as an assistant, he had lots of say, as well," forward Mathew Barzal said. "As a group, we all have a good relationship with him, so I think it’ll be an easy transition for our team."

The final coaching change of the offseason came in San Jose, with ownership and interim management firing Bob Boughner and his assistants before Mike Grier took over as GM. Grier hired David Quinn, who most recently coached the U.S. at the Beijing Olympics after spending three years with the Rangers.

Rick Bowness, the Stars' interim coach when Montgomery was fired who helped them reach the final in 2020 and was not brought back, joined Winnipeg. He immediately made an impact by stripping Blake Wheeler of the Jets captaincy.

The other new coaches — Lalonde in Detroit and Luke Richardson in Chicago — are not expected to make such big waves.

Richardson, who briefly was acting coach for Montreal during the 2021 final when Dominique Ducharme tested positive for the coronavirus, is overseeing the start of a long-term rebuild by the Blackhawks. Lalonde was Red Wings GM Steve Yzerman’s pick to help end the storied franchise’s playoff drought.

"He believes in what he’s preaching, which I think is great walking into a new locker room," captain Dylan Larkin said. "He’s made a great impression on the guys."