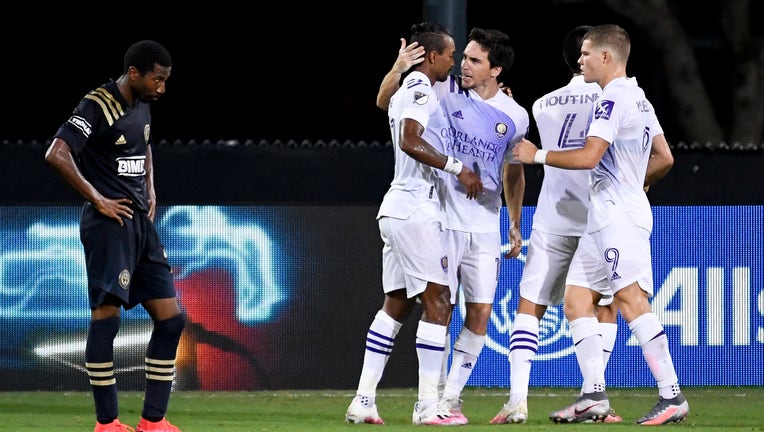 Mauricio Pereyra #10 of Orlando City SC celebrates with teammate Nani #17 after scoring a goal during the second half against the Philadelphia Union in the MLS is Back Tournament at ESPN Wide World of Sports Complex on July 20, 2020 in Reunion, Flori

LAKE BUENA VISTA, Fla. - Mauricio Pereyra’s goal midway through the second half gave Orlando City a 1-1 draw with the Philadelphia Union on Monday night and the top spot out of Group A in the MLS is Back tournament.

Orlando and Philadelphia each finished with two wins and a draw in the group stage. A better goal differential gave Orlando City took the top spot in the knockout round.

Ilsinho put Philadelphia ahead a few minutes after coming on as a substitute. His third career goal against Orlando City came after a long stretch where Orlando dominated scoring chances. Ilsinho’s right-footed shot beat Pedro Gallese to the far post.

It was the fourth straight meeting between the sides that finished in a draw.

Before Pereyra’s goal, Blake was the reason the Union were even in the match. Blake made six saves, including a stop from close range on Tesho Akindele in the first half. He denied Sebastian Mendez and Chris Mueller on the same play early in the second half.

Blake’s best save came just before Philadelphia took the lead when he tipped a header from Antônio Carlos off the crossbar.