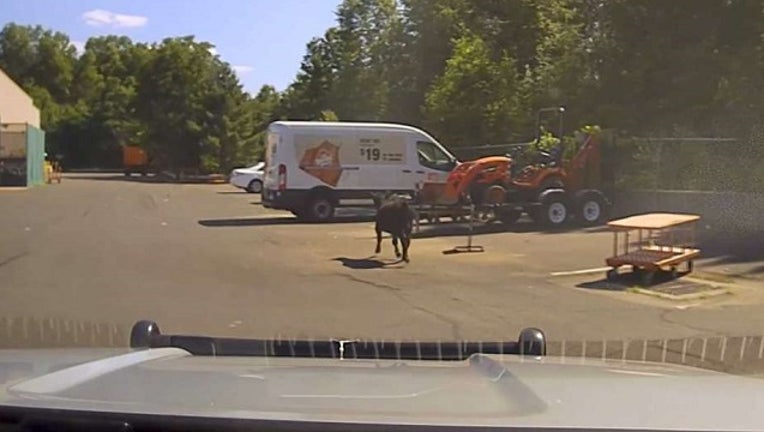 BLOOMFIELD, Conn. - The slaughter in a Home Depot parking lot of a calf that escaped a butcher shop and led employees on a chase has sparked outrage by animal lovers and elicited racist messages online.

The calf broke out of the Saba Live Poultry store in Bloomfield, Connecticut, on July 13 and ran behind the store across the street. A contractor who was doing construction work on the butcher shop even tried to shoot the animal with a bow and arrow, to no avail.

Dashboard camera footage from a Bloomfield Police officer who briefly followed the animal by car shows the animal eluding several people who tried to corral it.

When employees of the butchery finally did wrestle the calf the ground, Badr Musaed, who works in the shop, cut its throat.

Bilal Musid, the manager of the halal butcher shop, apologized for the killing but said his employees feared the animal would cause serious injury to someone if not stopped.

"It was kind of even attacking employees," he said, explaining why his colleague went to such extremes to end the chase.

The Bloomfield Police Department confirmed that animals have escaped the store before, but a slaughter like this has never happened before.

After the calf is killed, a police officer can be heard on audio captured by his body camera telling a man from the shop who is holding a knife that there is a problem, noting that, for instance, a bystander saw it. The man seems at a loss and replies that the bystander is frequently in the butcher shop.

"OK, but we're not in your store right now. We're in the back of Home Depot," the officer replies.

Animal activists are decrying the public slaughter. That the butcher shop was halal - which means it slaughters animals using knives in accordance with Islamic dietary laws - has led to a stream of racist comments posted on webpages associated with the store. Police have cited Musaed for public disturbance, and the state Department of Agriculture briefly shut it down.

Musid said he understands the public reaction to the killing.

"I understand their anger, but I didn't want this to happen either," he said, adding the animal could have caused an accident on the road or worse.

He bemoaned that some are expressing that anger by making anti-Muslim remarks. The shop's Facebook page has been temporarily disabled and reviews on its Yelp page suspended because of the media attention and the ensuing hateful comments.

Capt. Stephen Hajdasz, a public information officer with the police department, said police are considering an animal cruelty charge for Musaed and a disorderly conduct charge for the contractor who tried to stop the animal with an arrow.

The state Department of Agriculture investigated the shop after all of the attention and sent a cease-and-desist order, citing conditions at the facility that would result "in imminent and substantial harm to health of the animals."

The order has since been lifted after the shop agreed to comply with regulations regarding the treatment of livestock, and Musid said the shop is currently undergoing construction to better accommodate the animals and make sure something like this doesn't happen again.

But animal rights activists said this slaughter provides an insight into the cruel treatment of animals that are used for food. About 40 people held a vigil Sunday on the spot where the animal was killed and then crossed the street to hold a protest outside the shop, said Brandy Petrone, one of the organizers of the events.

Amber Canavan, a spokeswoman for People for the Ethical Treatment of Animals, said that anyone who is horrified with what happened to this animal would be equally horrified at what happens at dairy farms or slaughterhouses around the country.

The group is looking to put up a billboard near where the animal was killed, saying, "I'm me, not meat. See the individual. Go Vegan."

Chris Ehrmann is a corps member for Report for America, a nonprofit organization that supports local news coverage in a partnership with The Associated Press for Connecticut. The AP is solely responsible for all content.