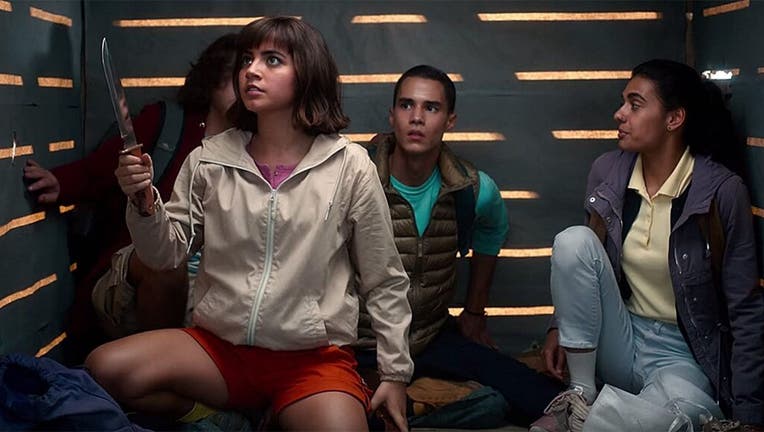 NEW YORK - Actress Isabela Moner says she didn't expect so much action when she signed up for "Dora and the Lost City of Gold," the upcoming film about the adventurous Latina explorer.

Moner said she thought it would be a funny film, with Dora in a "fish out of water" kind of situation as she starts high school.

"It's a whole 'Tomb Raider' meets 'Indiana Jones' movie," Moner, 18, said during a recent interview. "It just kind of takes you on this journey that has so many layers and so many characters and it's wonderful. What I want, what I hope for is for not only kids but adults to really connect to the movie too, as well as people my age."

While the live-action film is based on a popular children's cartoon character that debuted in 2000, "Dora and the Lost City of Gold" presents a new, older version of the character. The film's Dora is encountering society for the first time in years when she is sent to California for high school.

"It's nothing like the TV show," director James Bobin said. "We have nods to the TV show, but the TV show is education for kids. This is a kind of adventure comedy that happens to feature the character of Dora you may know from the TV show. And in fact, plays with the idea that you do who she is and how she would behave if she were a real person."

The film, which is in theaters Friday, features a large Latino cast, a rarity for a major Hollywood production.

Mexican actor Eugenio Derbez, also a producer of the movie, plays a mysterious explorer; while Eva Longoria is Dora's mom and actor Michael Peña is Dora's dad. Jeff Wahlberg, who is of Dominican descent, plays Dora's famous cousin, Diego. And Benicio Del Toro is the voice of Swiper, the fox that steals Dora's things in the animated series.

Longoria said that it was an honor to participate in "such a positive portrayal of a young Latina who is smart, and kind and brave and fearless and speaks Spanish and really celebrates that."

"It's definitely the biggest budget movie I have ever done so to see a studio invest in our (Latin) community like this was really, really cool to see," she said.

"She is a Latina heroine, I think in many ways, and I think that's so underrepresented in filmmaking. This film feels like an 'Indiana Jones' starring a girl who's 16 and Latina, and that would never have happened 20 years ago," Bobin said.

A kidnapping whisks Dora, Diego and two other teens to the jungle, where they must work to help save her parents and solve the mystery of a lost city.

For Moner, who was born in Cleveland and learned Spanish as a first language through her Peruvian mom, playing Dora presented the opportunity to explore her own heritage.

The movie contains several lines in Spanish as well Quechua, prompting Moner to call her great aunt in Peru during filming so she could ask about some words in the indigenous language, spoken in the Peruvian Andes and the highlands of South America.

"I felt closer to my culture, my roots," Moner said.

With the live-action movie, Derbez expects moviegoers to have fun.

"It has a lot of comedy so everyone is going to laugh. It is not one of those movies that you go with your kids and you get bored," said Derbez.

Longoria agreed. "I am so excited I'm finally in a movie that my son can watch. He can't watch it yet, but when he grows up, he'll appreciate it," she said.