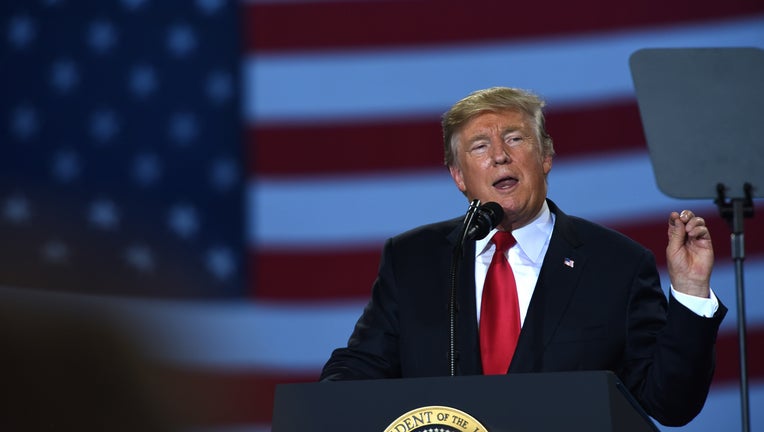 WASHINGTON - The planes were ready - their deadly cargo poised for delivery within a half-hour.

President Donald Trump had been given a series of options Thursday night on how to respond to Iran's downing of an unmanned American surveillance drone. Senior military advisers zeroed in on a plan to launch strikes on a trio of sites within Iran, and it was up to Trump to give the final go-ahead.

Trump's decision point came at the culmination of a tense 24 hours inside the West Wing after the drone went down.

How would he make his decision? "My gut," he told legislators.

When the military officers came looking for the president's final go-ahead, Trump said he had one last question.

"'I want to know something before you go,'" Trump recounted. "'How many people will be killed?'"

This account is based on information from more than a dozen legislators, congressional aides, administration officials and others, some of whom spoke on condition of anonymity to discuss internal deliberations.

Hours earlier, a model of a proposed new Air Force One was perched on the coffee table in the Oval Office. Its Trump-designed red, white and blue color scheme glistened under the Oval Office lights.

Seated behind the plane were Trump and Canadian Prime Minister Justin Trudeau, whose visit to Washington on Thursday to discuss trade and tariffs was suddenly upstaged by the rising tensions in the Middle East. With reporters peppering Trump with a cacophony of questions about how he would respond to Tehran, the president took a moment to extoll the virtues of the new presidential plane. "It's going to be terrific," he declared.

But what to do about Iran?

The president, who had just come from a briefing on the incident, seemed to telegraph what he had learned, declaring, "I find it hard to believe it was intentional, if you want to know the truth."

"I think that it could have been somebody who was loose and stupid that did it."

Over a year earlier, Trump had defied most of the United States' allies by pulling out of the Iran nuclear deal and strengthening sanctions on the regime, choking the Iranian economy and pushing Tehran to escalate tensions. Trudeau, who largely looked on in silence while Trump fielded questions, used his brief remarks to highlight the need for close coordination among nations.

"We look forward to discussing with our closest ally - their perspectives on this - and how we can move forward as an international community," the Canadian prime minister said.

Trump, for his part, made no mention of alliances.

Trudeau's meeting later that afternoon with Senate Majority Leader Mitch McConnell was abruptly cancelled when McConnell was summoned to the White House for a briefing on Iran.

But there was a glaring omission on the invitation list for briefing top congressional leaders and national security committee chairmen.

The heads of the House and Senate foreign relations committees were quickly added once the White House was reminded the panels have jurisdiction over the War Powers Act, according to a congressional aide familiar with the situation.

Once assembled, the lawmakers around the table made their case, one by one. Trump seemed eager to hear their opinions, even those of House Democrats who have launched a slew of investigations into the president.

"These conflicts have a way of escalating," Senate Minority Leader Chuck Schumer told the president. Even if Trump didn't intend to go to war, Schumer said, he could "bumble" into one.

The legislators saw "a commander in chief who struggled with the issue," said Republican Sen. Jim Risch of Idaho, the chairman of the Foreign Relations Committee. "It was painful for him."

Democrats made the case for caution, for partnering with allies, for taking a breath to de-escalate, as House Speaker Nancy Pelosi would put it later. Intelligence Committee Chairman Rep. Adam Schiff told the administration it could not continue to rely on the war authorizations approved by Congress after the Sept. 11, 2001 terror attacks.

White House reporters and photographers trained their eyes on a West Wing side door where the legislators would emerge, looking for any clues to what had transpired. When the legislators did turn up, there was a perplexing image: Schumer pumped his arms skyward in a celebratory "raise the roof" gesture while Pelosi cheerfully clapped.

Had the Democrats talked the president out of war? Had some sort of deal been struck?

Neither. It turned out Schumer had just relayed the happy news that his elderly mother had been released from the hospital.

"We left with the idea the president was going to consider some options," Pelosi said.

Televisions across the White House were tuned, as usual, to Fox News. Tucker Carlson's image flickered on the screen as he made his case earlier in the week against going to war with Iran.

Carlson was making a similar case to Trump in private, according to a White House official and a Republican close to the West Wing.

Trump had been soliciting a wide array of opinions about Iran after a pair of tankers were damaged a week earlier near the Strait of Hormuz, an incident U.S. officials blamed on the Iranians. The president was growing frustrated with his national security adviser John Bolton's advocacy for a strike, the officials said.

The attack on the drone put the military option on the table.

But when Trump asked his question Thursday about how many Iranians could die in the strikes, the answer gave him pause. He was told 150 Iranian lives were at stake.

"I thought about it for a second," Trump told NBC, "and I said: 'You know what? They shot down an unmanned drone, plane, whatever you want to call it. And here we are sitting with 150 dead people that would have taken place probably within a half an hour after I said go ahead.' And I didn't like it. I didn't think, I didn't think it was proportionate."

The president, long opposed to being drawn into a military conflict in the Middle East and in particular with an unpredictable foe like Iran, played up the drama of the moment. He tweeted Friday morning that the military had been "cocked and loaded" and that the weaponry was only 10 minutes away from being deployed.

As the day went on, a sense of normalcy returned to the White House.

On Friday afternoon, lawmakers filtered into the White House south lawn for the annual congressional picnic - just steps away from the windowless, basement Situation Room where security officials had debated what could come next.

Risch's prediction: "There's going to be something more proportional, obviously, and I suspect it's going to be not kinetic action."