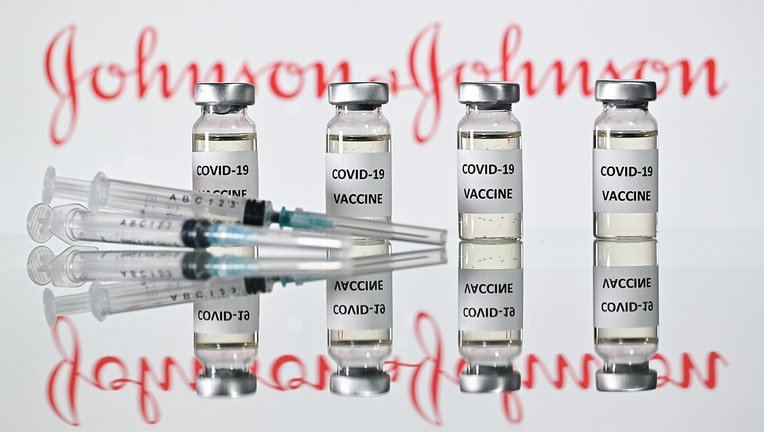 An illustration picture shows vials with Covid-19 Vaccine stickers attached and syringes with the logo of US pharmaceutical company Johnson & Johnson. (Photo by JUSTIN TALLIS/AFP via Getty Images)

NEW ORLEANS - Roman Catholic leaders in St. Louis and New Orleans are advising Catholics that the COVID-19 vaccine from Johnson & Johnson, newly approved for use in the U.S., is "morally compromised" because it is produced using a cell line derived from an aborted fetus.

The New Orleans archdiocese says the decision to receive a vaccine is one of individual conscience. In its statement late last week, it stopped short of advising Catholics not to take the Johnson & Johnson vaccine, but adds that Catholics should choose coronavirus vaccines made by Moderna or Pfizer — if they are available.

The Archdiocese of St. Louis on Tuesday encouraged Catholics to seek out the Pfizer or Moderna vaccines and avoid the Johnson & Johnson version if possible. Like the New Orleans archdiocese statement, the St. Louis statement called the Johnson & Johnson vaccine "morally compromised." However, the St. Louis statement stressed that Catholics can get that vaccine "in good conscience if no other alternative is available."

Later Tuesday, a statement issued by chairmen of the United States Conference of Catholic Bishops' committees on doctrine and abortion issues issued a statement reiterating the moral concerns. It said the Pfizer or Moderna vaccines are preferable "if one has the ability to choose a vaccine."

While not disputing the church officials' contention that an abortion-derived cell line is used in the production, Johnson & Johnson issued a statement Tuesday stressing that there is no fetal tissue in its vaccine.

Johnson & Johnson's COVID-19 vaccine is made using a harmless cold virus, called an adenovirus, the same technology it used to produce a successful Ebola vaccine. The adenovirus is grown using what’s called an immortalized cell line, and the virus then is pulled out and purified.

Several types of cell lines created decades ago using fetal tissue exist and are widely used in medical manufacturing but the cells in them today are clones of the early cells, not the original tissue.

The United States Conference of Catholic Bishops said in a January statement that "abortion-derived" cell lines were used to test the Moderna and Pfizer vaccines but not in their development or production.

The Archdiocese statements renewed religious discussions about the vaccine and the use of abortion-derived cells. In December, the Vatican said that "it is morally acceptable to receive COVID-19 vaccines that have used cell lines from aborted fetuses" in the research and production process when "ethically irreproachable" vaccines aren’t available to the public.

Pope Francis has frequently spoken about the need to ensure that vaccines are widely available, especially to the poor and marginalized. And, last month, a decree signed by the governor of the Vatican city-state said that Vatican employees who opt out of vaccination without a proven medical reason could be subject to sanctions, including being fired.

A New York lawmaker has introduced a bill that would allow the state's Department of Health to require New Yorkers to get the coronavirus vaccine under certain circumstances.

The Archdiocese of New Orleans posted its statement Friday, the day before the Food and Drug Administration cleared the Johnson & Johnson vaccine for use in the U.S.

Asked Tuesday about the New Orleans Archdiocese statement, Louisiana Gov. John Bel Edwards — a rare anti-abortion Democrat — stressed the need for people to use any of the approved vaccines available in order to stop the spread of the virus.

Edwards said he spoke Sunday with Archbishop Gregory Aymond about the statement. "I don’t read his statement as completely telling people who are Catholic or otherwise not to avail themselves of the Johnson & Johnson vaccine," said Edwards.

"I’m encouraging everyone out there to take the first vaccine that is available to them."

He noted a statement issue Monday by Bishop Michael Duca of Baton Rouge.

Duca acknowledged "moral concerns" about the newly approved vaccine. But, he added "if for any reasonable circumstance you are only able to receive the vaccine from Johnson & Johnson, you should feel free to do so for your safety and for the common good."

That is similar to guidance the U.S. bishops' conference issued in January. "Given that the COVID-19 virus can involve serious health risks, it can be morally acceptable to receive a vaccine that uses abortion-derived cell lines if no other available vaccines comparable in safety and efficacy with no connection to abortion," the January guidance said.