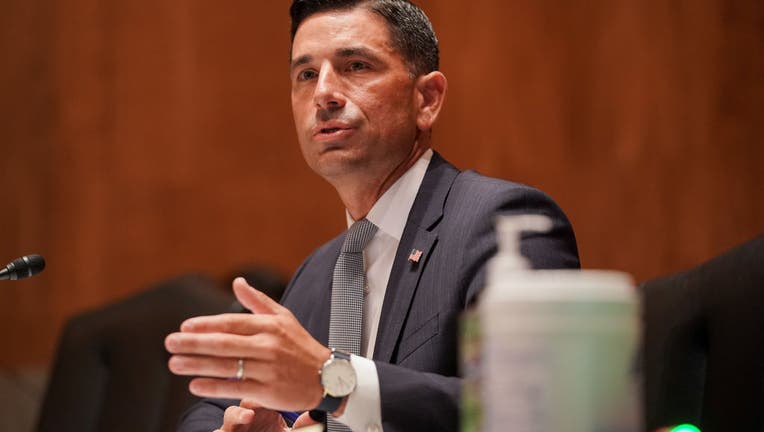 WASHINGTON - President Donald Trump’s nominee to lead the Department of Homeland Security denied allegations Wednesday that he molded intelligence reports to suit the administration, telling a Senate committee that a recent whistleblower's report is "patently false."

Both issues emerged early in the hearing as the Senate considers a nominee who has been accused of politicizing the third largest department in the federal government and has faced criticism over its handling of civil unrest, COVID-19 and immigration.

"Rhetoric and political ideology cannot drive intelligence reports and it should not predetermine the actions of any federal department," Sen. Gary Peters, top Democrat on the Senate Homeland Security committee, said at the start of the hearing.

Wolf seems to have solid Republican support on the committee but it is unclear if the full Senate will vote on his confirmation before the Nov. 3 election.

The whistleblower complaint released this month is the subject of a DHS Office of Inspector General investigation. Wolf pushed back hard on claims, which included allegations that he sought to downplay the threat posed by Russia and white supremacists, made by Brian Murphy, who was a senior official with the intelligence division of the agency until the acting secretary reassigned him in early August.

"It is patently false. It is a fabrication, completely," Wolf told the committee.

Wolf said Murphy was reassigned because of "credible allegations" that he had directed the collection of information about U.S. journalists who were covering the deployment by DHS of federal agents to Portland, Oregon, during protests over the summer.

In his whistleblower complaint, Murphy said that, as far as he was aware, the DHS intelligence division "never knowingly" collected information about journalists though it did track media reports that appeared to include leaked material.

"We outright challenge Mr. Wolf’s testimony and we look forward to the opportunity to provide classified testimony to congressional and OIG oversight authorities to describe details to the contrary," Zaid said in an email.

Wolf was also asked about a report by ABC News that he withheld an intelligence bulletin that warned law enforcement agencies about a Russian disinformation effort to promote false allegations about Biden's mental health.

Wolf said he put a hold on the two-page document in July so that it could be "improved" with additional context. It was then released in September. Peters questioned why it took that long, only coming out after news coverage that it had been held back. The assistant secretary blamed leadership changes in the intelligence division, alluding to the removal of Murphy.

"The important part is the underlying intelligence did not change," he said.

Later, he said that the intelligence community believes three nations are waging disinformation campaigns aimed at influencing the presidential election.

It's not yet clear when the committee will vote on Wolf, who also drew praise from Republican senators for sending agents to Portland, despite the opposition of local officials, and from members on both sides for the work of the thousands of law enforcement officers who work for DHS.

Wolf, who has been acting secretary since November, also pushed back on a report issued by the Government Accountability Office that found that neither he nor his deputy, Ken Cuccinelli, are legally able to hold their positions because of a violation of the order of succession, a finding that could jeopardize some agency actions on immigration and other matters.

Wolf noted that DHS lawyers dispute the GAO finding, which he pointed out is non-binding in any case. "We will continue to operate as we have," he said.