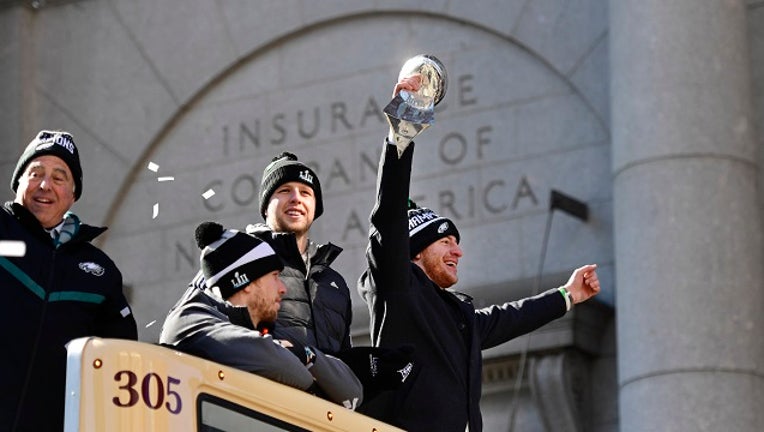 Team owner Jeffrey Lurie, with quarterbacks Nick Foles #9, Nate Sudfeld #7 and Carson Wentz #11 of the Philadelphia Eagles, acknowledge fans as Wentz hoists the Vince Lombardi Trophy atop a parade bus during festivities on February 8, 2018 in Philade

The panel Wednesday upheld a state Public Employment Relations Commission decision that the teacher’s union can challenge a decision to deny Robert Gurry sick leave. The judges found the “football flu” grievance can be decided by an arbitrator.

Gurry said he was battling the flu when he missed work on three days around the time the parade was held, including the parade date.

District workers were told that anyone absent due to illness on the parade date had to provide a doctor's note, but Gurry said he had not gone to a doctor due to the nature of his illness. It is unclear whether he went to the parade.

"I did not see a physician due to the fact that they do not want people with the flu in their offices and it is a viral infection," he told the school board. Gurry also noted he was not asked to provide a doctor's note for the other days he missed due to illness.

The union sought binding arbitration to resolve the issue. But the school board sought to block arbitration, contending it had a managerial right to deny the sick day.

The state commission ruled that while boards of education can require a doctor's note, it also found the application of any policy to deny sick leave is a "mandatorily negotiable topic," so the matter could proceed to arbitration.