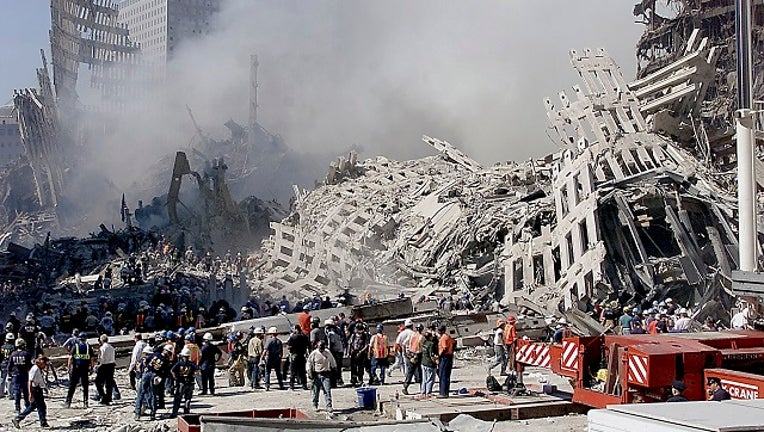 Fire and rescue workers search through the rubble of the World Trade Center 13 September 2001 in New York. ((Photo credit should read BETH A. KEISER/AFP/Getty Images))

ASSOCIATED PRESS - Firefighters who arrived early or spent more time at the World Trade Center site after the 9/11 attacks seem to have a modestly higher risk of developing heart problems than those who came later or stayed less, doctors reported Friday.

The research might have implications for any efforts to expand the list of health problems eligible for payment from a victim compensation fund.

The study has some big limitations and can't prove that dust or anything else about the disaster caused increased heart risks. It also doesn't compare the New York firefighters to the general population or to other responders such as paramedics or construction workers.

But it does suggest that working at the site raised risk for some firefighters more than others. Those who arrived by noon that day had a 44% greater chance of suffering a heart problem in the years since the attack compared to firefighters who came hours or days later.

Risk was 33% higher for those who worked there during six or more months versus less time.

That may sound large but heart problems were fairly uncommon -- only about 5% of these firefighters developed one.

"This is a modest increase, not an epidemic," said one study leader, Dr. David Prezant, chief medical officer of the Fire Department of the City of New York. However, "this risk increases over time; it doesn't disappear."

Results of the federally funded study were published in the journal JAMA Network Open.

It tracked the health of 9,796 male firefighters through 2017 -- 16 years after the collapse of the twin towers exposed many to a cloud of thick dust and particles from fires that burned for days. Female firefighters were excluded because there were only 25 and their heart risks may differ.

Medical records were available for years before the attacks, so researchers could consider high blood pressure, cholesterol, smoking and other factors.

They documented 489 heart problems since the disaster, including 120 heart attacks and roughly 300 procedures or surgeries for clogged arteries. Risks were higher among the 1,600 firefighters who arrived at the site by noon on Sept. 11, 2001, and among the 2,400 who worked there during six months or more.

There are good records on arrival times but less on duration at the site, making that result less reliable. Being counted as having worked one month could be one day during that month or 30 days.

Judith Graber, a researcher at Rutgers School of Public Health who has studied other 9/11 responders, called the research "very well conducted" and said "the important thing is the accumulation of evidence" suggesting increased risk.

Prezant said some other studies found signs suggesting a greater risk of heart problems, which are not covered now by the program that treats responders or the victim compensation fund. He said administrators will need more information to decide whether to include those conditions for any groups, such as firefighters who responded early.

"This adds to the evidence but it doesn't guarantee coverage," Prezant said.Dr. Nieca Goldberg, a cardiologist at NYU Langone Health and an American Heart Association spokeswoman, said 9/11 responders must stay alert for possible problems.

"Everyone needs to know potential symptoms of a heart attack so they can get rapid care," she said.