WASHINGTON - Pennsylvania Governor Tom Wolf will be among the limited guests in attendance at President-elect Joe Biden's Inauguration on Wednesday afternoon.

The governor made the trip to D.C. after aiding capital security efforts with around 2,300 Pennsylvania National Guards members. Wolf admitted the beefed-up security is abnormal, but necessary for ensuring a peaceful transition of power.

"This is not the way democracies are supposed to work, but this is what we're doing to make sure that we do what we've always had: a peaceful transition of power," Wolf said.

Wolf and Pennsylvania's first lady Frances Wolf spent some time Wednesday morning visit the state's guardsmen and woman. Wolf said both he and his wife are appreciative of the "great duty" being done by the National Guard. 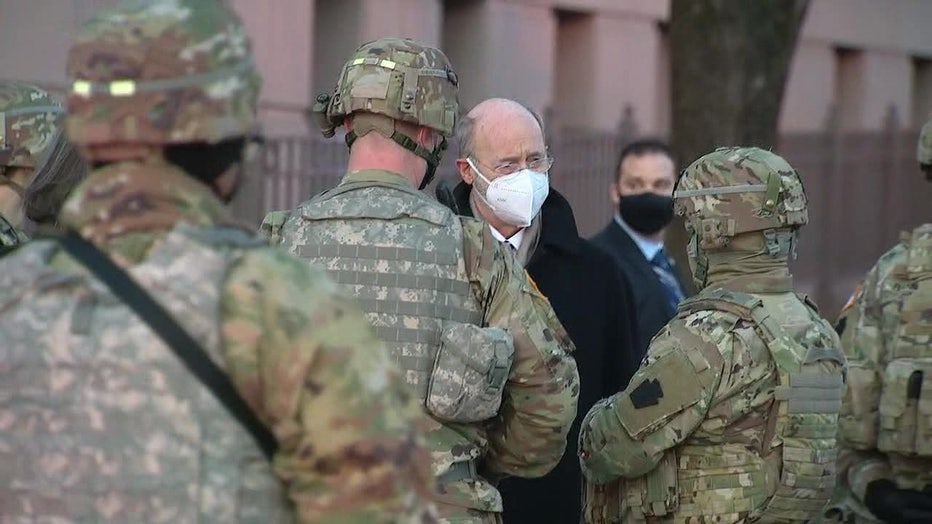 Pa. Gov. Tom Wolf spent some time with members of the Pennsylvania National Guard in Washington on Wednesday.

Despite serving as Pennsylvania's Governor since 2015, Wolf said this is the first inauguration he has atteneded. He was supposed to have gone to the swearing in of Barrack Obama in 2008, but never left his hotel room.

Biden, the nation's second Pennsylvania-born president, will be sworn in around noon on Wednesday. Due to the ongoing pandemic, which topped 400,000 U.S. deaths on Tuesday, attendence will be limited.