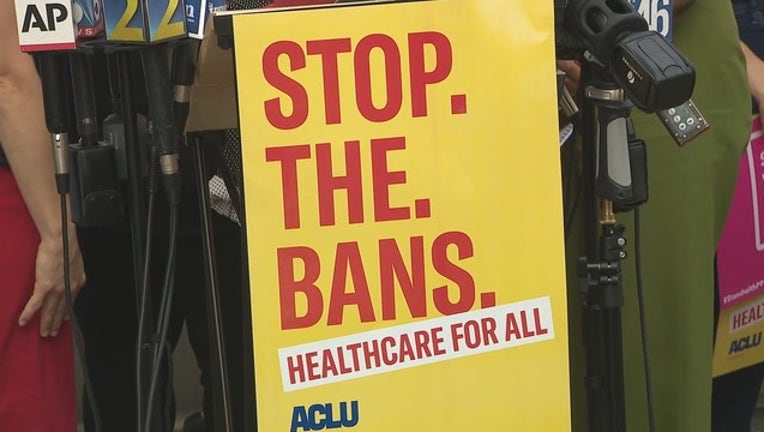 ATLANTA - A federal lawsuit filed Friday in Atlanta is the latest effort by abortion providers and advocacy groups to challenge a wave of restrictive abortion laws passed in conservative states.

Lawyers with the American Civil Liberties Union, Planned Parenthood and the Center for Reproductive Rights filed the lawsuit challenging a new Georgia law that effectively bans abortions about six weeks into a pregnancy.

The lawsuit, filed on behalf of Georgia abortion providers and advocacy groups, asks a judge to prevent the law from taking effect and to declare it unconstitutional. If it's not blocked, the law is set to take effect January 1.

"The U.S. Supreme Court has clearly held that a woman has the freedom to make one of the most intimate decisions that she can make," ACLU of Georgia legal director Sean Young said.

The so-called heartbeat law bans abortion once a fetal heartbeat can be detected, which can occur as early as six weeks into a pregnancy, before many women know they're pregnant. It is one of a spate of laws passed recently by Republican-controlled legislatures in an attack on the U.S. Supreme Court's 1973 Roe v. Wade ruling that said a woman has the right to choose whether to have an abortion.

The legislation makes exceptions in the case of rape and incest, if the woman files a police report first. It also allows for abortions when the life of the woman is at risk or when a fetus is determined not to be viable because of a serious medical condition.

It also declares an embryo or fetus a "natural person" once cardiac activity can be detected, saying that is the point where "the full value of a child begins." That would make the fetus a dependent minor for tax purposes and trigger child support obligations.

"This law is an affront to the dignity and health of Georgians," the lawsuit says. "It is in particular an attack on low-income Georgians, Georgians of color, and rural Georgians, who are least able to access medical care and least able to overcome the cruelties of this law."

The lawsuit was filed against Georgia Gov. Brian Kemp, Attorney General Chris Carr, state health officials and six district attorneys whose jurisdictions include the areas where the abortion providers who brought the suit practice.

Kemp's office declined to comment Friday, referring requests for comment to Carr's office. Kemp acknowledged when he signed the law in May that a court challenge was likely. But he said then that he was undeterred.

"I realize that some may challenge it in the court of law," Kemp said at the time. "We will not back down. We will always continue to fight for life."

Carr's office declined to comment, citing the pending litigation. But in response to a letter in April from Democratic state Sen. Jen Jordan asking Carr for his opinion on the law's constitutionality citing "the possibility of substantial legal fees," Carr's office said it was his duty to defend state laws and that the office generally doesn't comment on the constitutionality of state statutes.

Women choose to have abortions "for a variety of deeply personal reasons" that include family circumstances, medical concerns and financial situation, the lawsuit says.

If the law takes effect, some women who are able will travel out of state for the procedure, but other women will remain pregnant and give birth against their will or will seek to end their pregnancies outside of a clinical setting putting them at risk for harm, the lawsuit says.

The law could also have a chilling effect on health care providers in the state as its "vague language threatens clinicians with prosecution for any medical care they provide to pregnant patients that could harm an embryo/fetus," the lawsuit says.

The new definition of a fetus as a "natural person" appears to apply throughout the Georgia code with implications that are "vague and potentially vast," the lawsuit says.

A new Alabama law bans virtually all abortions, even in cases of rape or incest, and makes performing an abortion at any stage of pregnancy a felony punishable by 10 to 99 years or life in prison for the provider.

None of the bans has taken effect and all are expected to be blocked by the courts while legal challenges move forward.

Georgia Volunteer Captain Cathy Schneider said she is proud of Georgia for passing a law to protect the unborn.