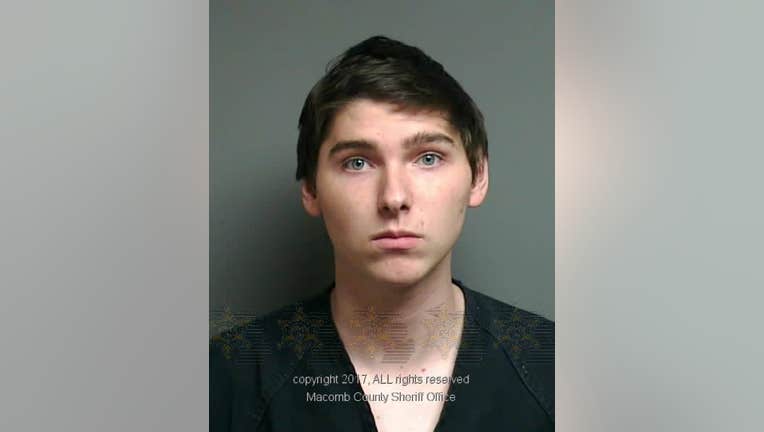 PONTIAC, Mich. (FOX 2) - A man who killed an Oakland County Sheriff's deputy was sentenced Tuesday to life in prison without parole.

Christopher Berak was sentenced to life in prison without the possibility of parole for first-degree murder and the murder of a peace officer for the death of Deputy Eric Overall.

A man who killed an Oakland County Sheriff's deputy was sentenced Tuesday to life in prison without parole.

Berak was accused of intentionally hitting Overall with his car during a multi-county police chase the day before Thanksgiving in 2017. Overall was laying out stop sticks on M-15 near Ortonville, attempting to help end the pursuit when he was hit.

Berak was being pursued by the Lapeer County Sheriff's Deputy after he went up to the station acting strangely. He'd been previously pulled over for speeding in Shelby Township and for some reason went to the neighboring county to confront police about it. Officials say Berak repeatedly told deputies he was God and was questioning why he had to obey the law. His actions and threats led to the pursuit.

The defendant's attorneys had previously claimed he had suffered from mental illness. Berak's competency had been debated after he was charged but in February 2018 he was found competent to stand trial for the murder charges.

Overall was 50 when he died. He was a 22-year veteran of the Oakland County Sheriff's Office.

Berak took his opportunity to speak before the sentencing.

"I'm sorry for what I did. I hope that they're all doing OK," he said.

Overall's wife, Sonya, took a chance to speak on how the loss has affected so many. Not only did she lose a husband and a best friend, but a son lost his father, an entire community lost a mentor, and countless people lost a friend.

"He was a man of honor and integrity. On and off duty, he always strived to do the right thing... Eric had a big heart and wore it on his sleeve," she said.

His son, Kenneth Overall, spoke next.

"My father impacted so many lives, like Sonya just said -- raised me and my brother up to be the best men we could be," he said. "My father was a great man, always selfess. That Thanksgiving morning, it will be a day we'll never forget. Every morning, every day we re-live it."