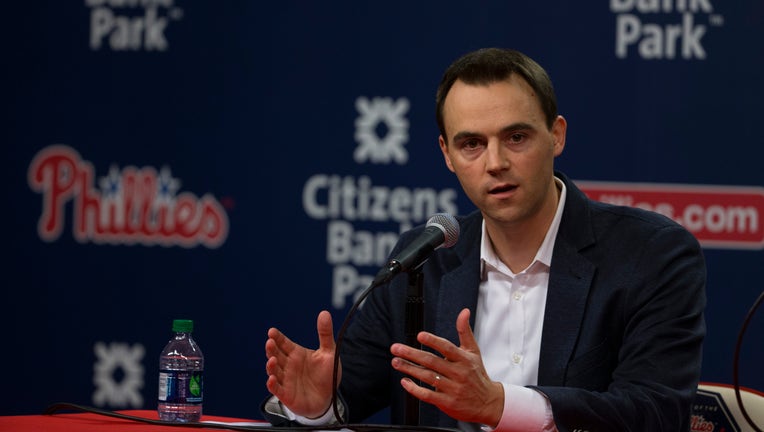 PHILADELPHIA, PA - SEPTEMBER 29: General manager Matt Klentak of the Philadelphia Phillies talks to the media prior to the game against the New York Mets at Citizens Bank Park on September 29, 2017 in Philadelphia, Pennsylvania. (Photo by Mitchell Le

PHILADELPHIA - The Philadelphia Phillies on Saturday announced that Matt Klentak has stepped down from his position as general manager and will be reassigned within the organization.

Klentak, 40, was unable to build a playoff contender during his five seasons in Philadelphia, despite adding big names like Bryce Harper, JT Realmuto and Zack Wheeler.

The Phillies went 389-481 under Klentak's front office and finished above .500 one time (2019). Philadelphia also went through four managers during Klentak's tenure, including the much-maligned hire of Gabe Kapler.

“While I am disappointed that we failed to reach our ultimate goal, I am nevertheless very proud of the progress that this organization made over the last five years and of the people who worked so hard to make it happen,” Klentak said.

Phillies Managing Partner John Middleton acknowledged the work Klentak did to help pull stars to Philadelphia and draft foundational pieces, but admitted "winning is what matters."

"While Matt made many significant contributions to the organization, we did not accomplish our goal of playing baseball in October," Middleton said. "Consequently, we have mutually agreed to allow new leadership to head Baseball Operations.”

Ned Rice will fill the role on an interim basis as the Phillies begin their search for a new general manager.