Murphy: No one should have gone to Trump fundraiser at Bedminster golf club

TRENTON, N.J. - No one should have come in person last week to President Donald Trump's fundraiser at his Bedminster golf club because of the risk of COVID-19 infection, New Jersey Gov. Phil Murphy said Monday.

Murphy called the trip the “wrong decision at every level,” and said it should have been canceled.

Murphy, a Democrat, spoke during several television appearances, saying state and federal officials were still working on contact tracing. He urged anyone at the club while the president was there to quarantine for two weeks.

“If you think you’ve been in touch or in the midst of someone who is COVID positive you’ve got to take yourself off the field,” he said. “This borders on reckless in terms of exposing people.”

The president attended a campaign fundraiser at his Trump National Golf Course Thursday, hours before he announced he had COVID-19. He had said earlier that a close aide was positive for the virus. 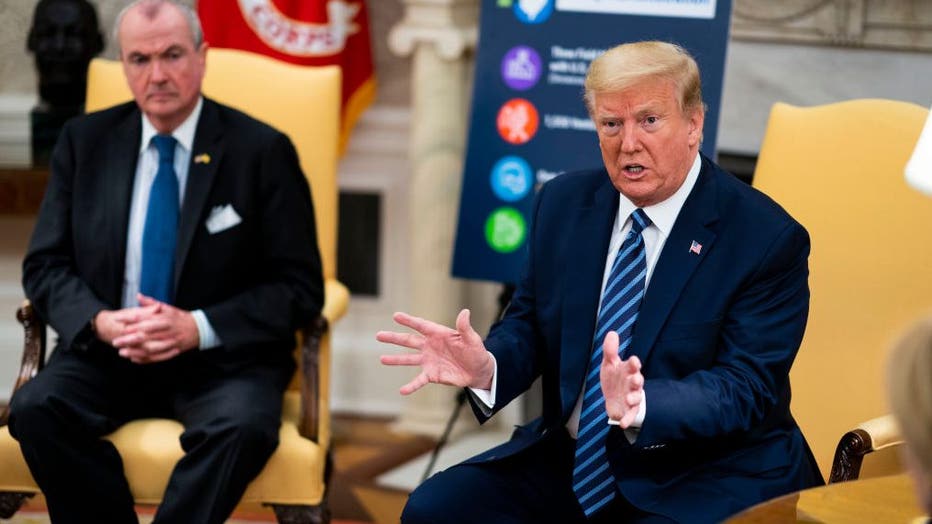 U.S. President Donald Trump meets with New Jersey Gov. Phil Murphy (L) in the Oval Office of the White House April 30, 2020 in Washington, DC. New Jersey, like many states, is seeking assistance from the federal government for the health and economic

The White House sent Somerset County officials a list of 206 guests at the event, but Murphy said all the staff at the club are New Jersey residents. It's unclear whether they were accounted for on the president's list.

White House spokesman Judd Deere said the president didn't have any contact with donors or staff that would be considered close, based on the CDC guidelines of longer than 15 minutes and within 6 feet.

Gov. Phil Murphy says the state is continuing to contact trace in the wake of the President's COVID-19 diagnosis following an event in New Jersey.