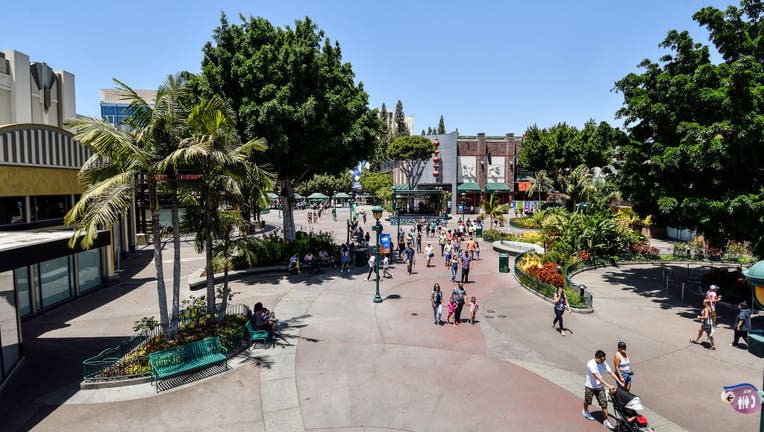 ANAHEIM, CA - JULY 12: The west end of The Downtown Disney District at the Disneyland Resort in Anaheim, CA, on Thursday, July 12, 2018. The Walt Disney Co. plans to build a new upscale hotel on 17 acres that comprise the western edge of Downtown Dis (Getty Images)

ANAHEIM, Calif. - Temperature screenings, hand-washing stations and physical distancing requirements will all be a part of the Downtown Disney District experience when it reopens Thursday.

Disney Park officials said they will follow CDC guidelines and have implemented new health and safety measures amid the coronavirus pandemic.

Late last month, officials announced the postponement of its reopening dates for Disneyland and California Adventure Park that were initially set to reopen on July 17.

Guests will have a different experience when returning to Downtown Disney amid the ongoing pandemic with new safety measures in place when it reopens Thursday.

Instead, the parks will now reopen in phases.

Following the reopening of Downtown Disney, California Adventure Park will reopen before the highly-anticipated reopening of Disneyland.

However, an official reopening date for the theme parks has not been announced.

While guests can still get a taste of magic at Downtown Disney, park officials have implemented new policies.

Tents have been installed outside the Downtown Disney District where guests will have their temperature taken before entering the property.

If a guest fails to pass the temperature screening with a temperature of 100.4 or higher they will move on to an additional screening process.

If they fail the second process, not only will they be turned away, but their entire group will be denied access.

According to Disneyland officials, there are six key policies in place for cast members, operation participant employees and guests:

• Temperature screenings prior to entry

• Face coverings are required for guests ages 2 and older

• Temporary operation modifications, including reduced hours at select locations and the suspension of entertainment offerings and high-touch interactive areas

• An increased focus on cleaning and sanitation, including the addition of hand-washing stations and hand sanitizers in key areas.

Guests should also be aware that not all businesses within the district will reopen.

Ballast Point will not reopen Thursday after California Governor Gavin Newsom ordered the re-closure of indoor dining in some counties for at least three weeks, including Orange and Los Angeles.