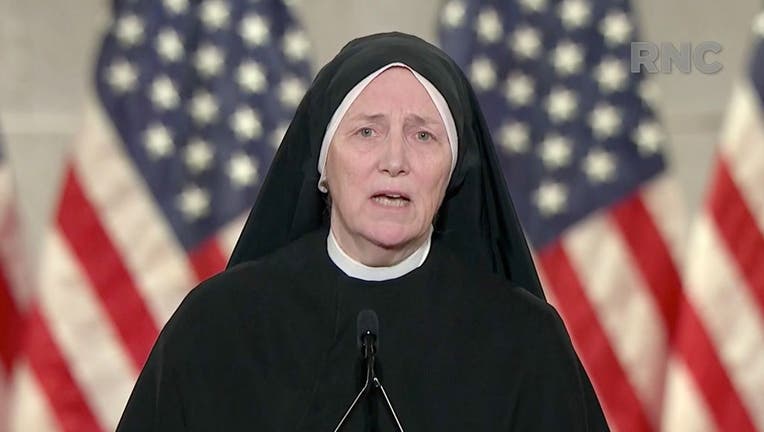 CHARLOTTE, NC - AUGUST 26: (EDITORIAL USE ONLY) In this screenshot from the RNC’s livestream of the 2020 Republican National Convention, Sister Dede Byrne, surgeon, military veteran and member of the Little Workers of the Sacred Hearts of Jesus and M

A Washington nun who is also a surgeon and retired U.S. Army officer says, “Donald Trump is the most pro-life President that this nation has ever had.”

Sister Deirdre “Dede” Byrne of the Little Workers of the Sacred Hearts of Jesus and Mary focused her remarks Wednesday night at the Republican National Convention on abortion.

She says the president’s “belief in the sanctity of life transcends politics.”

While Trump has fully embraced an anti-abortion agenda, some people of faith — particularly more liberal ones — point to a broader view of the “pro-life” label in criticizing some of his policy proposals as inconsistent with that interpretation. For example, Trump’s administration has slashed the refugee admissions cap for the U.S. to historic lows, while also pursuing a policy of separating migrant families at the border.

Get today’s stories right in your email: SIGN UP FOR FOX 35 EMAIL NEWSLETTERS