Speaking in front of a crowd of about 300 people the vice president was greeted by union boss John McNesby who gifted Pence a 'Back the Blue' t-shirt. Pence then spoke for 20 minutes denouncing calls from the so-called "radical left" to defund the police.

“Under this president and this administration, we are not going to defund the police. Not now, not ever," Pence said.

Pence recognized the police custody death of Minnesota man George Floyd, and acknowledged the division the nation is going through.

“We also don’t need to choose between supporting our police and supporting African American families here in Philadelphia or anywhere in America. We can do both. We have done both," Pence said.

Pence then pivoted to last summer's police standoff in Tioga during which six officers were hurt when trying to issue an arrest warrant. He mentioned all the wounded officers by name and called them "heroes."

Meanwhile, outside the event, pro-police groups and anti-police demonstrators were out in full force. Protesters chanted the names of people killed during encounters with police officers. 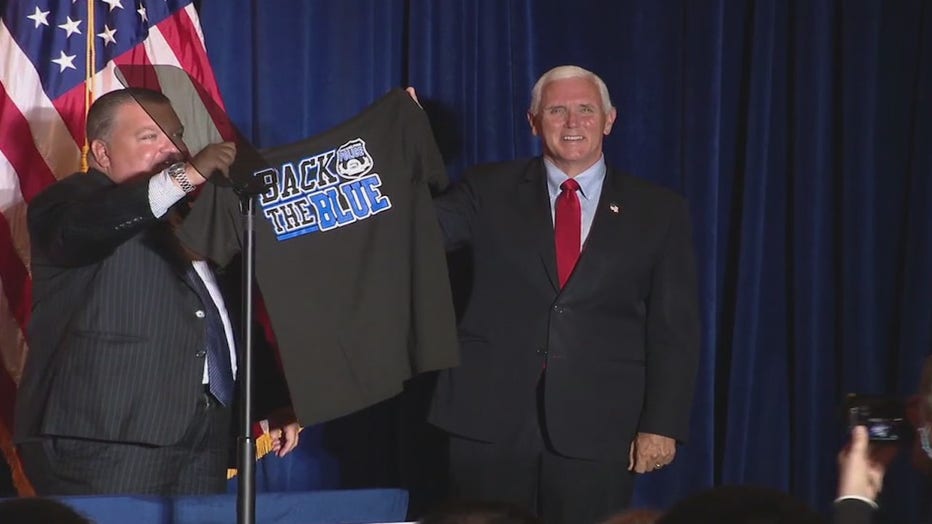 “I would like the VP to know that he serves all people but he has not served black people," Christopher Bowman said. "Until you want to say all lives matter than the black lives have to matter too."

Pennsylvania, a state that shockingly went to Donald Trump in the 2016 election, is again poised to play an important factor in this year's election. Joe Biden, who will challenge the incumbent Trump, was in his hometown of Scranton on Thursday and unveiled his economic plans.