WYNNEFIELD - Many fans in our area could not make the trip to Los Angeles to attend the memorial service for Kobe Bryant and his daughter Gianna. Instead, they found other ways to honor him. For instance, through his favorite cheesesteak.

"I was going to just grab it and leave, but then I see this, so I'm going to sit here and eat my cheesesteak, just to think about him while I'm eating the cheesesteak," says Andrea Hawkins.

She says she stopped by Larry's Steaks on North 54th Street to get the $5 special "Kobe Cheesesteak," but was surprised to see the restaurant did a little more.

Owner, Tony Elebah, decked out the corner booth where Kobe usually sat, with a special sign dedicated to "Kobe's Corner." On Monday morning, his employees hung up pictures that were taken during his visits.

Elebah also lit candles and provided additional candles for customers to stop and light if they came by the store. They broadcasted the service on their TVs. 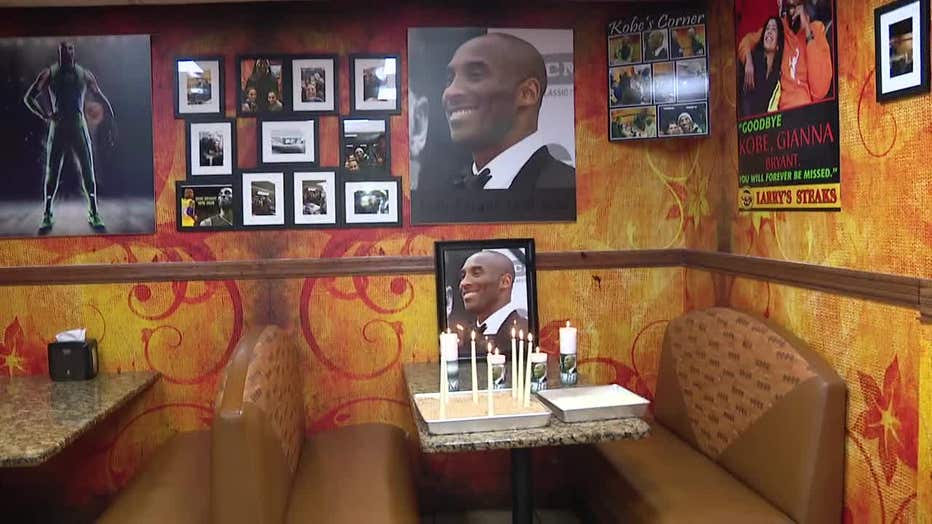 The owner of Larry's Steaks set up a memorial honoring the NBA legend.

Meanwhile, some of Aces Nation did make the trip out to Los Angeles.

"It's totally surreal, it doesn't feel real, I can't even believe I'm here," he said.

‘Her smile was like sunshine’: Vanessa Bryant remembers her ‘thoughtful’ daughter Gianna

‘When Kobe Bryant died, a piece of me died’: Michael Jordan tearfully pays tribute to Kobe

Vanessa Bryant recalls Kobe as a hopeless romantic and loving father: 'He was my everything'