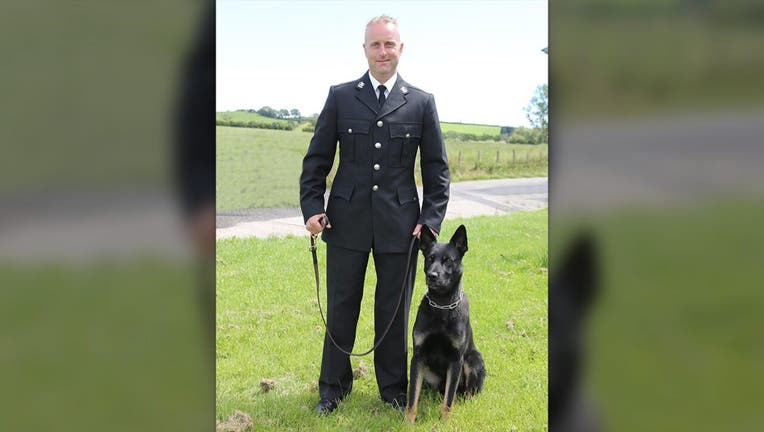 Max, a 2-year-old German shepherd mix, and his handler Police Constable Peter Lloyd, who completed their police dog training in February for the Dyfed-Powys Police, were part of a broad search and rescue mission on a Wales mountainside during their f

A rookie police dog helped rescue a missing mother and her 1-year-old from the edge of a ravine during his first day on the job in the United Kingdom Saturday, authorities said.

Max, a 2-year-old German shepherd mix, and his handler Police Constable Peter Lloyd, completed their police dog training in February for the Dyfed-Powys Police. They were part of a broad search and rescue mission on a Wales mountainside during their first shift together.

The woman had not been seen or heard from in two days, according to Inspector Jonathan Rees-Jones, and her phone was not working.

“Thanks to excellent work between teams, the woman’s car was quickly found on a mountain road,” he said in a news release Wednesday. “Although this gave officers a location to search from, there was still a vast area to cover given the amount of time she had been missing.”

The search party included a mountain rescue team, a police helicopter and additional ground units that fanned out over the rough terrain.

Rees-Jones said the rookie dog’s capabilities “really came into play” during the search.

The new team reached her first. She waved them down from where she was trapped between a steep ravine and the mountainside, police said.

“They were safe, but cold, and appeared to have been in the area for a significant amount of time,” Rees-Jones said.

Lloyd said it was Max’s reaction to the woman’s call that helped them locate the pair.

“I was really pleased that during our first operational deployment as a dog team, myself and Max were able to safely locate the missing mother and baby,” he said. “Max remained focused throughout the long search and he proved invaluable.”