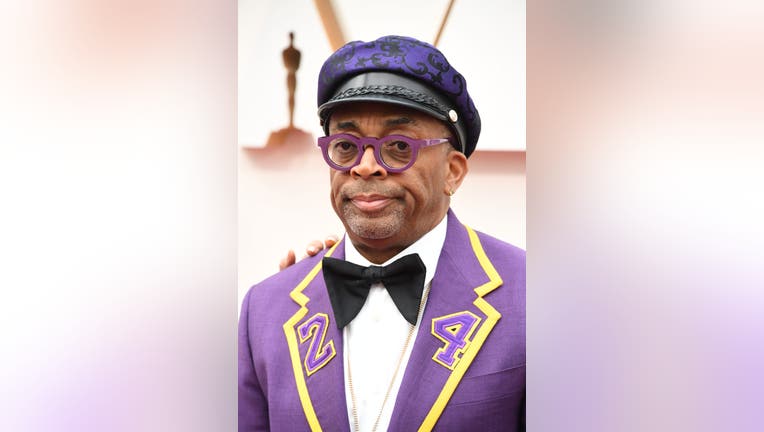 LOS ANGELES - The Latest on the 92nd Academy Awards, which are being bestowed Sunday at the Dolby Theatre (all times local):

The “BlacKkKlansman” director wore a purple suit trimmed in yellow adorned with Bryant’s No. 24 on the lapel and back. He also wore a pair of Bryant’s Nike sneakers. 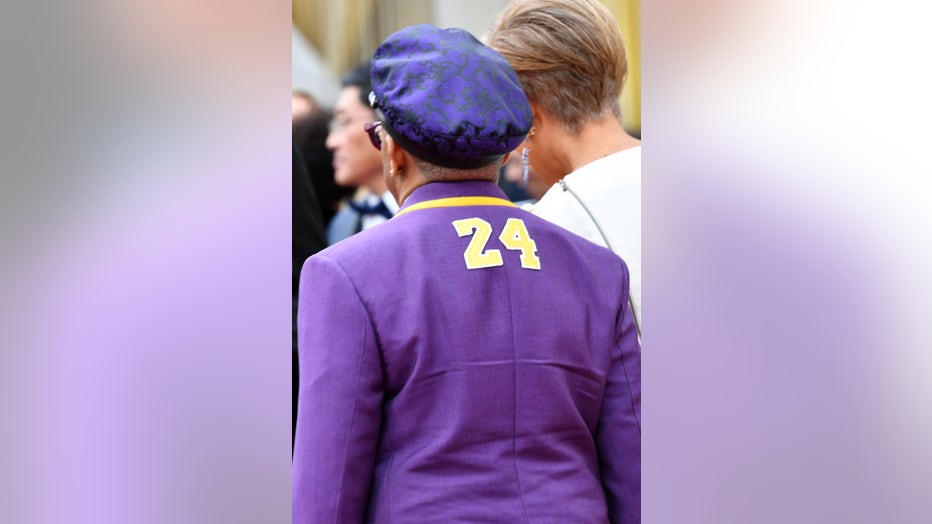 Lee walked the red carpet in a purple suit last year, too — a nod to the late musical artist and close friend Prince.

Bryant, who died Jan. 26 in a helicopter crash, along with his daughter and seven other victims will be part of the Oscars’ In Memorium segment.

Roots frontman Questlove said Bryant was "a great person, a stand-up guy." The Philadelphia native recalled the waves Bryant made in 1996 when he convinced Brandy to be his date at prom. Bryant and Questlove had since struck up a friendship based in part on their Philly upbringings.

"Hair Love" director Matthew A. Cherry has brought a special guest to the Oscars red carpet — Deandre Arnold, a Texas high school student who was told he couldn’t attend graduation unless he cut his dreadlocks.

Arnold’s story brought national attention and prompted the Texas Legislative Black Caucus to work up a bill that would ban discrimination based on hair textures and styles commonly associated with race. Cherry was eager to lend his support — his film about a young black girl who asks her inexperienced father to help style her hair is nominated for best animated short.

"It means the world to us to have him here with us," Cherry said. "We wanted people to see how good of a kid he is, but also there’s no reason people should be policing our hair."

Arnold said it’s been “validating” to get backing from Cherry and other celebrities, including Ellen DeGeneres, who gifted him $20,000 toward his education.

“I’m standing strong because of the support system I have behind me,” Arnold said.

"Regardless of the outcome, I think the door has been opened,” the director from South Korea said. “I think as long as we continue this effort, the door will just open wider and wider."

"Parasite" has a chance to be the first non-English film to win best picture — a credit to its poignant story about income inequality, a talented ensemble cast and an academy membership that has grown more international in recent years. Bong walked the red carpet with eight actors from the film, noting that actors and others from the American film industry were excited to meet them.

"I don’t necessarily think it’s fair to separate films into English and non-English," he said. "I think as long as they’re beautiful, it’s cinema."

Bong isn’t sweating whether he leaves with a trophy. Mostly, he’s excited that the Oscars end a five-week trip away from his home in South Korea.

"After the ceremony, there will be a party, and after the party, I will get to go home," he said. “So thinking about those two things, doesn’t make me nervous at all."

"Frozen 2’s" Kristen Anderson-Lopez has a secret hiding under her emerald gown: Sneakers.

An award-winning composer along with husband Robert Lopez, Anderson-Lopez lifted her dress proudly to show off her comfortable kicks, shouting to the fan bleachers that it’s the "only way to do the Oscars."

Already Oscar winners for “Let It Go” and “Remember Me,” from "Coco," the couple is nominated this year for the song "Into the Unknown."

The footwear isn’t reflective of her excitement, though. She says an Oscar win feels like "a second wedding" for them.

Zazie Beetz says she considered her role in "Joker" to be a "career-changing and life-changing experience" — and that hasn’t been shaken by criticisms that the film is "dangerous” or "irresponsible."

"I was so thrilled to see a story like this and see it get shared,” Beetz said Sunday before the Oscars. “To be a part of it has been wonderful."

"Joker" is the leading nominee heading into Sunday’s ceremony with 11 nods, including for best picture.

An origin story about the classic Batman villain, "Joker" has been a blockbuster hit but divisive with critics, some of whom worried audience members might see Joaquin Phoenix’s character as an inspiration or excuse to act out. Warner Bros. was even prompted in September to declare the film is not "an endorsement of real-world violence of any kind."

"It’s been in my heart from the beginning," said Beetz, who also praised Phoenix for calling out the industry’s issues with diversity.

The Oscars red carpet has started with an unwelcome guest — hard rain and a blast of cold air.

The rain was a possibility for Sunday, so the carpet is protected in a large tent. But just as stars like Billy Porter and Tamron Hall arrived, the skies above the Dolby Theatre in Hollywood opened up in a downpour.

The position of some camera crews had them just outside the tent, sending them scrambling to find tarps and plastic to protect their gear.

"Oh my God the tent is leaking," said one photographer who noticed a hole over the massive Oscars sign.

Harried staff are running around with squeegees trying to bump excess water off the tent.

Temperatures were in the high 50s on Sunday, which is considered cold in Los Angeles.

The downpour didn’t dampen the red carpet looks of early arrivals, including Porter. The “Pose” star wore a glistening, gold metallic top with a feather effect and a full skirt depicting the interior of the Cupola Room at Kensington Palace.

The Oscars are here, already.

After the shortest awards season in decades, the 92nd annual Academy Awards will get underway Sunday evening at the Dolby Theatre in Los Angeles. The red carpet is being rolled out two to three weeks earlier than usual in a bid to freshen up a ceremony and potentially boost ratings.

Fittingly for a fast race, a movie about a mad dash has risen to the top of the heap. After winning nearly every major precursor award, Sam Mendes’ "1917" is the favorite for best picture. But many believe the Korean thriller "Parasite" has a chance at an upset.

The ceremony begins at 8 p.m. EST, telecast live on ABC.