President Joe Biden says the US is on track to remove all troops from Afghanistan by August 31, 2021. The date will mark the end of a 20 year engagement. The President said he feels confident in the Afghan government to stand on its own.

KABUL, Afghanistan - The Taliban took control of two more provincial capitals in Afghanistan on Monday, officials said. Their fall marked the latest development in a weekslong, relentless Taliban offensive as American and NATO forces finalize their pullout from the war-torn country.

The militants have ramped up their push across much of Afghanistan, turning their guns on provincial capitals after taking large swaths of land in the mostly rural countryside. On Monday they controlled five of the country's 34 provincial capitals. At the same time, they have been waging an assassination campaign targeting senior government officials in the capital, Kabul.

The sweep comes despite condemnations by the international community and warnings from the United Nations that a military victory and takeover by the Taliban would not be recognized. The Taliban have also not heeded appeals to return to the negotiating table and continue long-stalled peace talks with the Afghan government.

Two lawmakers from northern Samangan province — Hayatullah Samangani and Mahboba Rahmat — said the provincial capital of Aybak fell to the Taliban on Monday afternoon without resistance. They said government officials fled to another district. 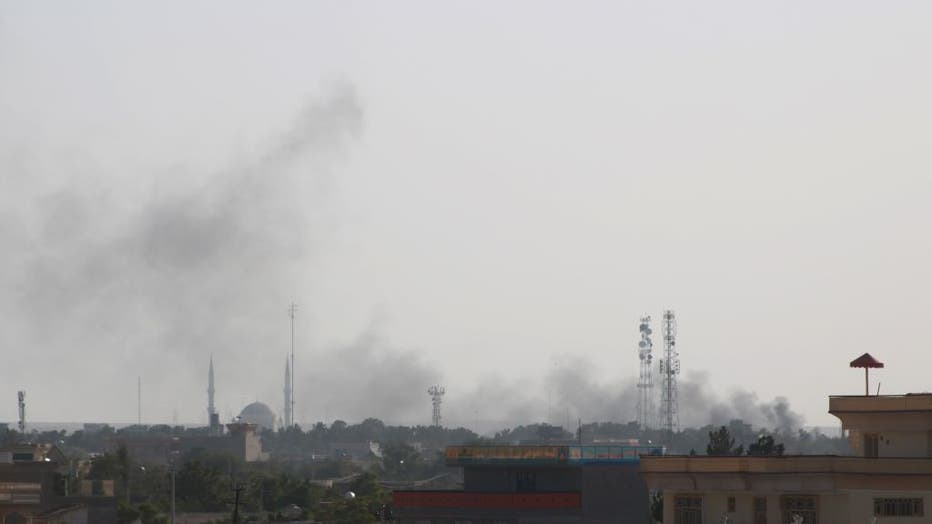 According to Mohammad Noor Rahmani, the council chief of northern Sar-e Pul province, the Taliban overran the provincial capital after over a week of resistance by the Afghan security forces, after which the city of Sar-e Pul collapsed. The government forces have now completely withdrawn from the province, he said.

Several pro-government local militia commanders also surrendered to the Taliban without a fight, allowing the insurgents to gain control of the entire province, Rahmani added.

The Taliban are also fighting on for control of the city of Kunduz, the capital of northern Kunduz province. On Sunday, they planted their flag in the city's main square, where it was seen flying atop a traffic police booth, a video obtained by The Associated Press showed.

Kunduz’s capture would be a significant gain for the Taliban and a test of their ability to take and retain territory in their campaign against the Western-backed government. It is one of the country’s larger cities with a population of more than 340,000, and was a key area defended against Taliban takeovers by Western troops over the years.

After billions of dollars spent in aiding, training and shoring up Afghan forces, many are at odds how to explain the surprising Taliban blitz that has threatened — and by now taken — several of the country’s 34 provincial capitals.

Rahmani, the council chief in Sar-e Pul, said the provincial capital had been under siege by the militants for weeks, with no reinforcements being sent to the overstretched Afghan forces. A video circulating on social media Monday shows a number of Taliban fighters, standing in front of the Sar-e Pul governor’s office and congratulating each other for the victory.

The country-wide Taliban offensive intensified as U.S. and NATO troops began to wrap up their withdrawal from Afghanistan this summer. With Taliban attacks increasing, Afghan security forces and government troops have retaliated with airstrikes aided by the United States. The fighting has also raised growing concerns about civilian casualties.

On Monday, UNICEF said it was shocked by the increasing number of casualties among children amid the escalating violence in Afghanistan. Over the past three days, at least 27 children have been killed in various provinces, including 20 in Kandahar, it said.

"These atrocities are also evidence of the brutal nature and scale of violence in Afghanistan which preys on already vulnerable children," the agency said. It did not identify the side responsible for the killings. UNICEF also raised the alarm over what it said was increased recruitment of children by armed groups.

The Taliban have also taken most of Lashkar Gah, the capital of southern Helmand province, where they took nine of the 10 police districts in the city last week. Heavy fighting there continues, as do U.S. and Afghan government airstrikes, one of which damaged a health clinic and a high school.

Helmand health department chief Sher Ali Shakir said Monday that in the previous 24 hours, seven people were killed and 95 were wounded in the fighting and were transferred to hospitals in the province.

As they rolled through provincial capitals, the Taliban issued an English language statement on Sunday saying that residents, government employees, and security officials had nothing to fear from them.

However, revenge attacks and repressive treatment of women have been reported in areas now under Taliban control.

Meanwhile, hundreds of people displaced by fighting in northern provinces have reached Kabul, where they are living in parks without adequate access to drinking water amid scorching summer temperatures.

"We walked with slippers, didn’t have the chance to wear our shoes," said Bibi Ruqia, who left northern Takhar province after a bomb hit her house. "We had to escape, now we are here in a park."

In Kabul on Sunday, unknown gunmen shot dead a journalist and a colleague, said police spokesman Ferdaws Faramarz. He said Toofan Omar was also a prosecutor in Paktia province. Omar was traveling from Bagram to Kabul when his car was ambushed.

"Its not clear whether it was the result of a personal dispute or he was killed for being a prosecutor or journalist," Faramarz said.

The Taliban in response to a query from The Associated Press said they were investigating the incident.

The Taliban often target government officials and those they perceive as working for the government or foreign forces, though several attacks have been claimed by the Islamic State group.