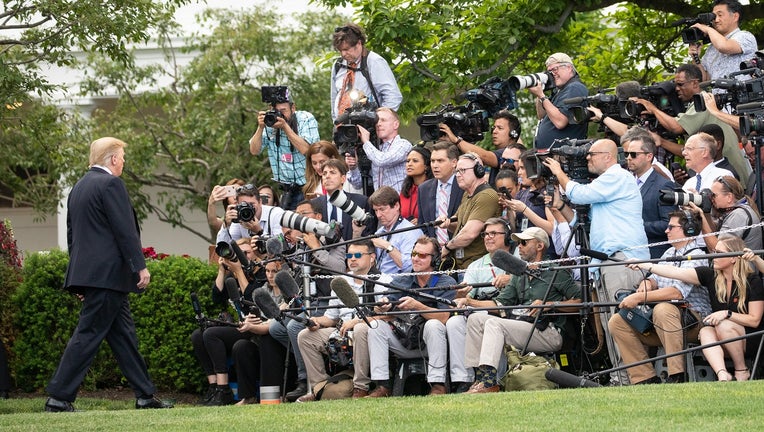 WASHINGTON - President Donald Trump abruptly quit a meeting with congressional Democrats Wednesday with a flat declaration he would no longer work with them unless they drop their investigations in the aftermath of the Trump-Russia report.

After the truncated meeting with the Democratic leaders, scheduled for a discussion of U.S. infrastructure problems, Trump lashed out at Speaker Nancy Pelosi for her comment earlier in the morning on Capitol Hill that she believed the president engaged in a "cover up" of the Russia probe. The president then strode to the Rose Garden where aides had gathered reporters and TV cameras for his demand that Congress drop its investigations that are increasingly leading to talk of what he called the "i-word" -- impeachment.

"I walked into the room and I told Leader Schumer and Speaker Pelosi I want to do infrastructure," he said, referring to the top Democratic senator, New York's Chuck Schumer.

"But you know what we can't do it under these circumstances," Trump said. "So get these phony investigations over."

Pelosi said Trump "just took a pass" on working on national infrastructure problems. She said she would be praying for him.

She told reporters after a private meeting of House Democrats that Trump is "engaged in a cover up," even as she tried to tamp down some Democrats' rush toward an impeachment inquiry in their showdown with the White House.

Pelosi and five of her top investigative committee leaders spoke with fellow Democrats after an increasing number called for the beginning of an impeachment inquiry following special counsel Robert Mueller's investigation into Russia election meddling and contacts with the Trump campaign.

Those Democrats say the move would not necessarily be aimed at removing the president, but instead to bolster their position in court as Trump has broadly stonewalled their investigations. Some two dozen House Democrats have signed on.

With her leadership team, Pelosi, who has resisted pressure to impeach, pointed rank-and-file Democrats toward the legal battles that she said have already found success in forcing Trump to comply with investigations.

A growing number of Democrats, incensed by former White House counsel Don McGahn's defiance Tuesday of a House panel's subpoena for testimony, have confronted Pelosi and pushed her and other leaders to act.

Pelosi has said she believes Trump is "goading" Democrats into impeachment. And Trump appeared to relish the Democratic division in a Wednesday tweet: "The Democrats are getting ZERO work done in Congress."

Democrats leaving the meeting appeared to be taking Pelosi's words into consideration. Tennessee Rep. Steve Cohen, who called for the impeachment inquiry on Tuesday, said he could see both sides.

Of leaders' reluctance, Cohen said "it's a political concern rather than an actual Constitutional one."

Rep. Katie Hill, D-Calif., freshman from a swing district, wants to let court actions play out a bit, and is undecided on starting an impeachment inquiry.

"I think that we're seeing the drumbeat moving in that direction," Hill said. The more Trump "defies us, the more that it's becoming an inevitability. But I don't think that the caucus as a whole is there yet."

Inside the room, others largely backed Pelosi's approach, according to a person granted anonymity to discuss the private meeting. Another Democrat in the room said there were no fireworks.

Still, Some Democratic leaders, while backing Pelosi, also signaled that a march to impeachment may become inevitable.

"We are confronting what might be the largest, broadest cover-up in American history," Majority Leader Steny Hoyer told reporters Tuesday. If a House inquiry "leads to other avenues including impeachment," the Maryland Democrat said, "so be it."

But South Carolina Rep. Jim Clyburn, the No. 3 Democrat in the House, counseled caution just before the meeting. A majority of Democrats would support impeachment, Clyburn said, "just not now." He told CNN the House should follow a methodical process to get to the facts about Trump's actions.

Amid the impeachment talk and despite Trump's pledge to stonewall, there was one rare detente between House Democrats and the administration - House Intelligence Committee Chairman Adam Schiff postponed a meeting to enforce a subpoena against the Justice Department after the department agreed to turn over a cache of documents related to special counsel Robert Mueller's report.

Schiff said the department "will begin turning over to the committee twelve categories of counterintelligence and foreign intelligence materials as part of an initial rolling production."

Still, Democrats are continuing to escalate their requests for information. The House Judiciary Committee recently voted to hold Attorney General William Barr in contempt of Congress after negotiations broke down with the department over similar materials.

McGahn is the most-cited witness in Mueller's Trump-Russia investigation report, recounting the president's attempts to interfere with the probe. And that makes his silence all the more infuriating for Democrats.

"Our subpoenas are not optional," Nadler said. "We will not allow the president to stop this investigation."

Democrats are also encouraged by an early success in the legal battles, a Monday ruling by a federal judge against Trump on in a financial records dispute with Congress. Trump's team filed notice of appeal on Tuesday.

But Pelosi's strategy hasn't been swift enough for some lawmakers. In particular, several members of the Judiciary panel feel they must take the lead in at least launching impeachment proceedings. They say a formal impeachment inquiry could give Democrats more standing in court.

"I think that's something a lot of members of the committee - and more and more members of the caucus - think is necessary," said Rep. Steve Cohen of Tennessee. "I think an inquiry, as the Senate Watergate hearings were, would lead the public to see the misdeeds of this administration."

Others, though, including some from more conservative districts, said they prefer the step-by-step approach.

With a 235-197 Democratic majority, Pelosi would likely find support for starting impeachment proceedings, but it could be a tighter vote than that margin suggests. Some lawmakers say voters back home are more interested in health care and the economy. Many come from more conservative districts where they need to run for re-election in communities where Trump also has support.