FOX NEWS - With wide grins and a historic handshake, President Trump became the first sitting U.S. leader to set foot in North Korea when he took 20 steps into the Hermit Kingdom on Sunday.

Trump shook hands with North Korean leader Kim Jong Un as he crossed the low stone curb separating the North and the South at around 3:45 p.m. local time. The event in the Demilitarized Zone — which also included a roughly 50-minute meeting behind closed doors — marked a return to face-to-face contact between the two leaders after talks broke down during a summit in Vietnam in February.

Speaking to reporters afterward, Trump said that the two leaders had agreed to revive talks on the pariah nation’s nuclear program.

The president said "speed is not the object" in trying to reach a deal but noted he believes both sides want to get the job done.

"We're looking to get it right," Trump said. 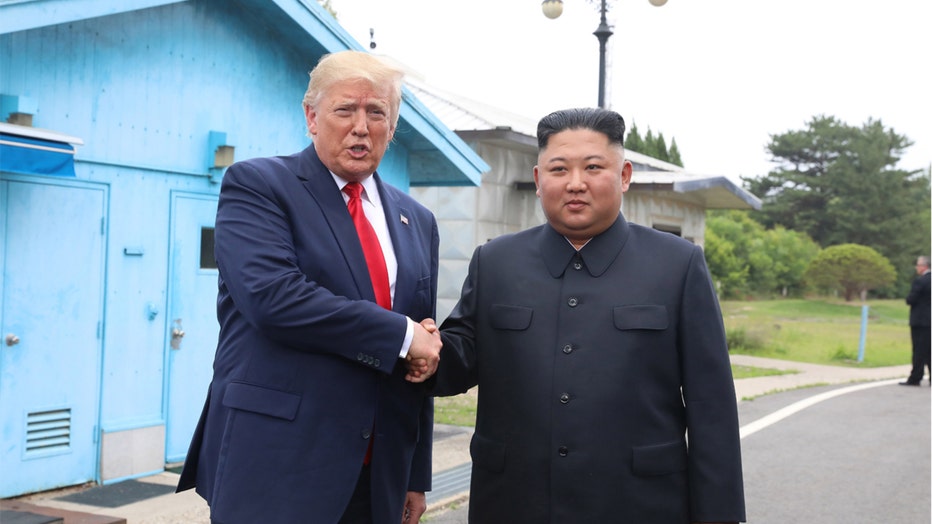 Talks between the U.S. and North Korea had mostly broken down since the Hanoi summit, which ended without a deal. North Korea has hesitated at Trump's insistence that it give up its nuclear ambitions before it sees relief from crushing international sanctions.

The U.S. has said the North must submit to "complete, verifiable and irreversible denuclearization" before sanctions are lifted.

Despite their nearly hour-long chat, Trump said that sanctions on North Korea are still in place, although seemingly left open the possibility of scaling them back as part of renewed negotiations.

“At some point during the negotiation, things can happen," the president told reporters, adding that he suggested Kim could visit Washington, D.C., during their discussions.

Trump says he told Kim that, “at the right time, you’re going to come over” and that could be “any time he wants to do it.” He added that he “would certainly extend the invite” and that, “at some point” it will happen.

Hours earlier, Trump became the first sitting U.S. president to step foot inside North Korea. He described it as "a great day for the world."

Inside the "Freedom House" on the South Korean side of the zone, Trump and Kim were joined by the president's daughter and son-in-law, Ivanka Trump and Jared Kushner.

It was Trump's first visit to the DMZ, which every president since Ronald Reagan — except for President George H.W. Bush — has toured during their time in office, according to the Associated Press. But the elder Bush, who died last year, visited the DMZ while serving as vice president under Reagan.

Fox News' Dom Calicchio and the Associated Press contributed to this report.