Experts say current COVID-19 vaccines will likely work on the new variant of the coronavirus in the United Kingdom, but are working to confirm that with additional testing.

"Since the beginning of this pandemic, we’ve tried to update you as soon as possible about changes in the scientific data or the analysis," Johnson said. "So I must tell you this afternoon that we’ve been informed today that in addition to spreading more quickly, it also now appears that there is some evidence that the new variant, the variant that was first identified in London and the southeast, may be associated with a higher degree of mortality."

Johnson said that in light of the development and amid a crush of new cases that require hospitalization, the National Health Services in the U.K. are under "intense pressure."

"With another 40,261 positive cases since yesterday, we have 38,562 COVID patients now in hospital and that’s 78% higher than the first peak in April," Johnson continued.

He said that there have been an additional 1,401 deaths in the country since Thursday.

"So it’s more important than ever that we all remain vigilant in following the rules that we stay at home, protect the NHS and thereby, save lives," the prime minister said. 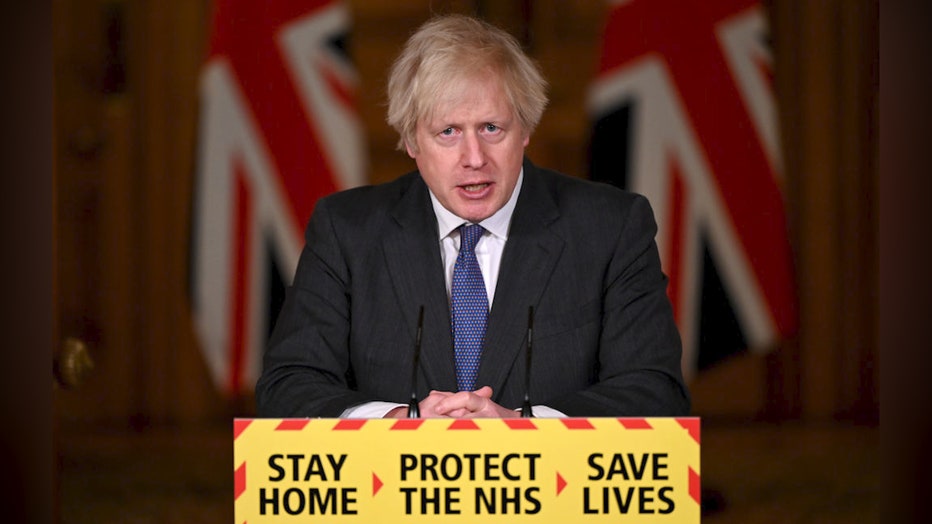 Johnson said that both the Oxford-AstraZeneca and Pfizer COVID-19 vaccines still remain effective against the U.K. coronavirus variant.

The U.K. plans to offer a first dose of vaccine to more than 15 million people by mid-February as it targets the country’s oldest and most vulnerable residents in the program's first phase. Progressively younger groups of people will follow suit, with the government planning to reach everyone over 18 by September.

The need is urgent. Britain’s health care system is staggering as doctors and nurses battle the more contagious variant of COVID-19.

While new infections appear to have peaked, the number of people hospitalized is still rising. Britain has reported 93,463 coronavirus-related deaths, more than any other country in Europe and the fifth-highest toll worldwide.

The coronavirus is becoming more genetically diverse, and health officials say the high rate of new cases is the main reason. Each new infection gives the virus a chance to mutate as it makes copies of itself, threatening to undo the progress made so far to control the pandemic.

The U.S. Centers for Disease Control and Prevention said a new version first identified in the U.K. may become dominant in the U.S. by March, potentially leading to more hospitalizations and deaths because it spreads much more easily, said the CDC, warning of "a new phase of exponential growth."

Anthony Fauci summarizes the status of the coronavirus pandemic

Fauci, the nation’s leading infectious disease expert, summarized the status of the pandemic amid a devastating surge, which has pushed new case counts and death tolls higher than ever before in dozens of states across the U.S.

"We need to do everything we can now... to get transmission as low as we possibly can," said Harvard University’s Dr. Michael Mina. "The best way to prevent mutant strains from emerging is to slow transmission."

After months of relative calm, "we’ve started to see some striking evolution" of the virus, biologist Trevor Bedford of the Fred Hutchinson Cancer Research Center in Seattle wrote on Twitter. "The fact that we’ve observed three variants of concern emerge since September suggests that there are likely more to come."

The first new variant discovered in the U.K. has now been reported in at least 30 countries, including the U.S.The highly contagious mutation also turned up on a different version "that’s been circulating in Ohio ... at least as far back as September," said Dr. Dan Jones, a molecular pathologist at Ohio State University.

"The important finding here is that this is unlikely to be travel-related" and instead may reflect the virus acquiring similar mutations independently as more infections occur, Jones said.

That also suggests that travel restrictions might be ineffective, Mina said. Because the U.S. has so many cases, "we can breed our own variants that are just as bad or worse" as those in other countries, he said.

Some lab tests suggest the variants identified in South Africa and Brazil may be less susceptible to antibody drugs or convalescent plasma, antibody-rich blood from COVID-19 survivors — both of which help people fight off the virus.

Researchers expressed concern Wednesday about the new findings, in large part because they suggest that future mutations could undermine vaccines. The research tested coronaviruses from the U.K., South Africa and Brazil and while these developments are daunting, further testing needs to be done.

So far, current vaccines induce a broad immune response and should remain effective against the new variants, according to health officials.

If the virus eventually mutates enough that the vaccine needs adjusting — much like flu shots are altered most years — tweaking the recipe wouldn’t be difficult for vaccines made with newer technologies. Both the Pfizer and Moderna vaccines are made with a piece of the virus genetic code that is simple to switch.

And health experts stressed for common sense practices such as mask-wearing and social distancing because a vaccine is not the cure-all.

"We are shooting ourselves in the foot by allowing unmitigated transmission of this virus" and not doing "common sense" measures such as mandating mask-wearing as some other countries are doing, he said.

"How can the bars and restaurants be full? It’s like ‘what pandemic?’ We’ve reaped the seeds we’ve sown," he said.