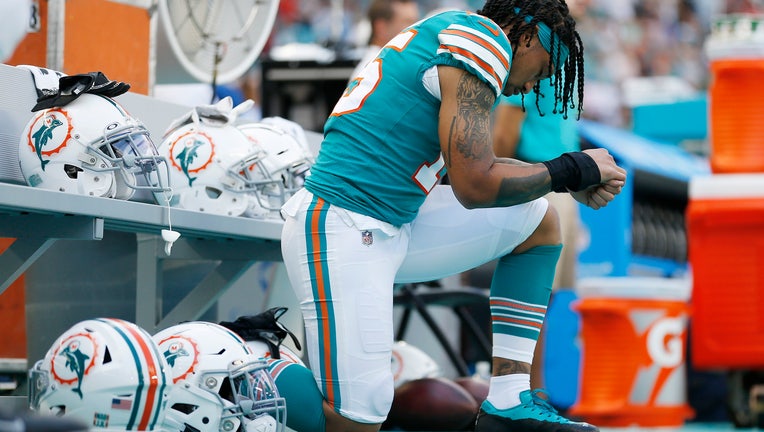 Albert Wilson #15 of the Miami Dolphins kneels during the playing of the national anthem prior to the game against the Philadelphia Eagles at Hard Rock Stadium on December 01, 2019 in Miami, Florida. (Photo by Michael Reaves/Getty Images)

“If you speak up for change, then I shut up and play,” safety Bobby McCain said.

The NFL plans to play the national anthem and “Lift Every Voice and Sing” — the Black national anthem — before every game this weekend, including the Dolphins’ opener Sunday at New England. The Dolphins have been asked several times this week by reporters whether they’ll stand or kneel for the songs.

"If we could just right our wrongs, we wouldn’t need two songs,” center Ted Karras said in the video.

In an August 2016 interview, Colin Kaepernick explains his refusal to stand during the national anthem while serving as the San Francisco 49ers quarterback.

Flores, wearing a T-shirt that read VOTE, closed the video in unity with his players.

“Before the media starts wondering and guessing, they just answered all your questions,” Flores said. “We’ll just stay inside.”