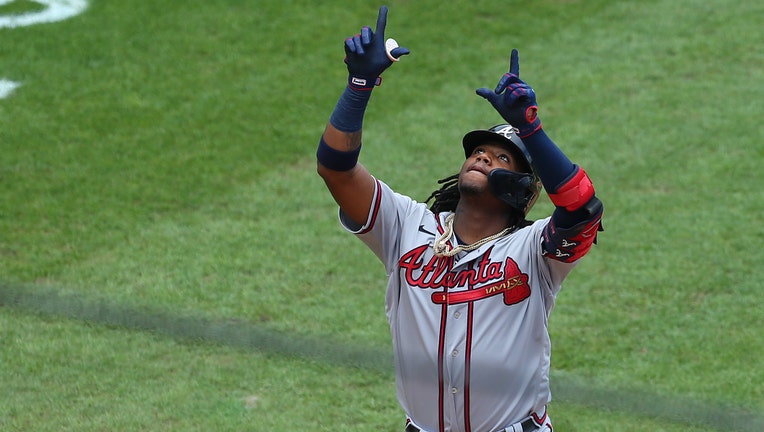 PHILADELPHIA, PA - AUGUST 09: Ronald Acuna Jr. #13 of the Atlanta Braves gestures after hitting a two-run home run during the fifth inning against the Philadelphia Phillies in game one of a double header at Citizens Bank Park on August 9, 2020 in Phi

PHILADELPHIA - Ronald Acuna Jr. hit a two-run homer to put the Atlanta Braves ahead for good in a 5-2 win over the Philadelphia Phillies in the first game of a doubleheader on Sunday.

The Braves scored five runs in the decisive fifth inning, Starter Vince Velasquez left with a runner on base and Acuna went deep off Deolis Guerra (1-1) for a 2-1 lead.

The Phillies used four pitchers in the fifth and their beleaguered bullpen -- coming off a rare sharp outing in a combined shutout in the series opener -- was rocked again. Adam Duvall hit a three-run double just below the 334-foot sign in left off Adam Morgan for a 5-1 lead and send the Braves on their way to the seven-inning victory.

Tyler Matzek (2-0) pitched 1 1/3 scoreless innings for the win nd Mark Melancon worked a scoreless ninth for his third save.

Acuna’s shot into left was greeted with an enthusiastic “Thatta boy!” out of the Braves dugout that could have been heard in the empty cheap seats.

Braves starter Huascar Ynoa went just 2 1/3 innings and the Braves used five relievers with one more game yet to play. Braves lefty Will Smith got out of the biggest jam when he retired Didi Gregorius on a pop up with two runners on to end the fifth inning.

Atlanta lefty Max Fried (2-0, 2.04 ERA) takes the mound against Spencer Howard in his big league debut. The 24-year-old Howard, a second-round pick in the 2017 draft, is widely considered the Phillies’ top pitching prospect since Aaron Nola or even Cole Hamels.

The Phillies are playing seven doubleheaders in 45 days for the first time since 1978.

I MUST BE IN THE FRONT ROW!

The Phillies placed a Bob Uecker cutout up in the Uecker Seats -- the last row of Citizens Bank Park, to be exact. Uecker played parts of two seasons for the Phillies and his cutout watches from Section 302V, Row 21, Seat 1 overlooking right field.

The Phillies were supposed to hand out Tug McGraw bobbleheads to fans as part of the 1980 World Series champions weekend celebration. But the figurine never got the call from the promotional bullpen -- it was never made.

Most of the giveaways on the 2020 promotions schedule are in storage and will be used next season, said Phillies director of merchandise Scott Brandreth.

The Bryce Harper bobblehead scheduled for June 28, perhaps the most anticipated item on the slate, is secure.

“Keep an eye on the 2021 promotional schedule, when that comes out,” Brandreth said. “We’re working on it right now, finding dates. We’ll put the puzzle back together. I guess in a sense it might be easier to put the schedule together next year. We already know 12 of the items. Most of them are here.”

The exceptions? The opening day headbands and the 2020 opening weekend T-shirts. They’ve been donated or used to raise money for charity. McDonald’s, which sponsored the T-shirt, gave some shirts to employees and is selling others to raise money for the Ronald McDonald House.

The Phillies send RHP Aaron Nola (0-1, 3.97 ERA) to the mound against Atlanta LHP Sean Newcomb (0-1, 6.57) on Monday to wrap the four-game series. Nola struck out a career-high 12 batters in his last start against the Yankees.