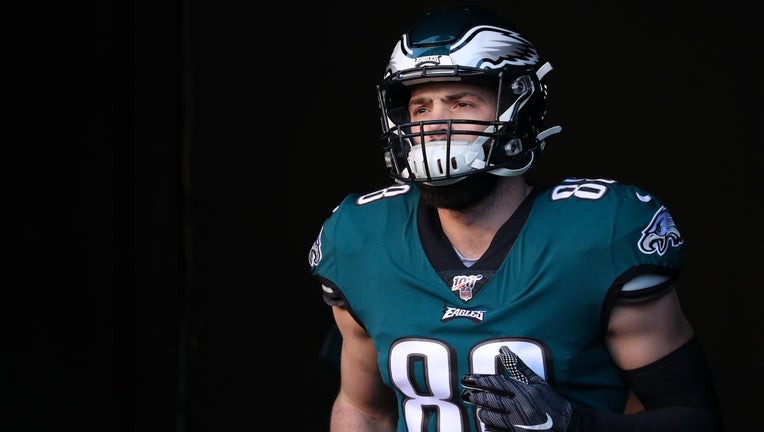 PHILADELPHIA, PA - DECEMBER 22: Dallas Goedert #88 of the Philadelphia Eagles runs onto the field prior to the game against the Dallas Cowboys at Lincoln Financial Field on December 22, 2019 in Philadelphia, Pennsylvania. (Photo by Mitchell Leff/Gett

ABERDEEN, S.D. - Police in South Dakota have charged a man with simple assault after they say he punched Eagles tight end Dallas Goedert.

Goedert, a native of South Dakota, was reportedly out with family when he was "sucker-punched" during an apparent altercation.

Aberdeen police say they responded to a restaurant just after 1 a.m. on Saturday morning for a report of an assault.

Video of the incident surfaced on social media over the weekend alleging to show Kyle Douglas Hadala, a 29-year-old Florida resident, punching Goedert in the face.

In the video, Goedert is seemingly knocked out by the single, blow, which he did not appear to see coming.

WARNING: Video contains content that may be disturbing to some.

Police say Hadala has been charged with simple assault in the incident.

Goedert was taken to the hospital and was treated and released.

Some of Goedert's Eagles teammates responded to the incident on social media.

Goedert, who played college football at South Dakota State, is entering his third season with the Eagles, and in 2019 he had his best season of his career. Goedert came down with a career-high 58 receptions for 607 receiving yards and five touchdowns.

He is the No. 2 tight end in an offense that features Pro Bowler Zach Ertz, but Goedert should have a larger role in the Eagles’ offense in the upcoming season.