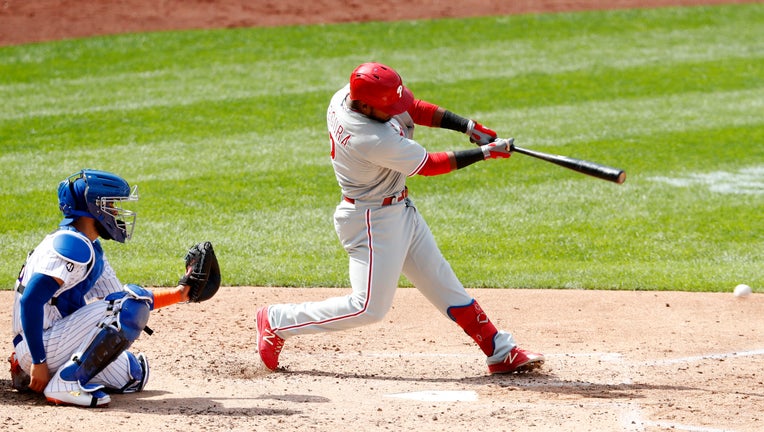 NEW YORK - Jean Segura has helped all over the Philadelphia Phillies infield this season.

“Jean has been special for us this year," manager Joe Girardi said.

Segura hit a two-run homer in the 10th inning and drove in a career-best five runs, bailing out the Phillies' abominable bullpen to salvage a 9-8 win over the New York Mets on Monday for a four-game split.

Philadelphia rookie Alec Bohm countered with a tying single in the eighth against Jeurys Familia, plating Segura before Andrew Knapp turned too wide around third and got picked off to end the inning.

Segura hit his fifth homer of the season with two outs in the 10th, lining a pitch from Miguel Castro (1-1) over the wall in left-center. Segura, who entered with 12 RBIs this season, also had a three-run double in the first inning and finished with four hits.

Héctor Neris allowed an RBI single to Brandon Nimmo in the bottom of the inning but still completed his third save.

Rhys Hoskins and J.T. Realmuto homered for Philadelphia, which improved to 20-17 and moved 3 1/2 games ahead of New York and remained 1 1/2 ahead of Miami for second place in the NL East. Philadelphia opens a brutal stretch with five doubleheaders in 15 days Tuesday.

Segura has bounced between second and third base this season after being an everyday shortstop throughout his career. Girardi had ample praise for Segura’s upbeat attitude throughout the transition.

“It’s a big opportunity for us to make it to the playoffs,” said Segura, in his ninth big league season. “Dang, I’m waiting for that moment. I would love to be in the playoffs and have a playoff game because I never did in my career.”

Wheeler pitched six innings in his first start as a visitor at Citi Field and handed off a 6-3 lead that was immediately blown by a bullpen that entered with a 7.04 ERA.

Rookie left-hander JoJo Romero allowed consecutive singles to Michael Conforto and J.D. Davis, and Conforto scored to make it 6-4 when shortstop Didi Gregorius threw away a certain double play on the relay.

McNeil hit his first homer of the season a day earlier. An All-Star last year, McNeil is batting .381 (16 for 42) in his past 11 games following a cold start.

“We were able to battle and just give ourselves the opportunity to win the game, which is nice,” McNeil said. “Next time we’re going to close the deal and hopefully get a win.”

Edwin Díaz pitched a 1-2-3 ninth inning for New York, lowering his ERA to 2.04. Phillies closer Brandon Workman (1-1) walked McNeil but stranded him in the bottom half to force extras.

Wheeler allowed doubles to Andrés Giménez, Conforto, Davis and Dominic Smith during a three-run fifth, but he was otherwise excellent in his first start as a visitor at Citi Field.

The right-hander struck out seven, allowed eight hits and hit two batters in his second start against the Mets since leaving New York to sign a $118 million, five-year deal with Philadelphia last offseason. Girardi pulled him after 83 pitches.

“I was a little surprised," Wheeler said. "But obviously it’s his call, so you have to respect it.”

Hoskins added a two-run homer in the second — his ninth — and Realmuto put the Phillies up 6-0 with a solo shot off Ramírez in the fifth. Realmuto has 10 home runs.

Conforto had his second straight three-hit game. New York had 13 hits a day after setting a season high with 17 in a 14-1 blowout.

“All the time, we keep saying that these guys fight,” Mets manager Luis Rojas said. "That’s exactly what they did today. They grinded at bats against a tough pitcher, Wheeler, throwing the ball really well. They didn’t give in and that third time through the order, they were putting really good at-bats against him.”

Segura was in uniform 90 minutes before first pitch — at least 45 minutes sooner than usual — confusing his teammates. He told teammates he knew he was going to have a big day and wanted to get an early jump.

Segura predicted he'd get five hits, but came up short.

Giménez made his fourth straight start at shortstop in place of struggling Amed Rosario and made several stellar defensive plays. He jumped to catch Phil Gosselin's line drive in the third, then laid out to snag Hoskins' grounder up the middle in the fourth. In the 10th, he threw out Hoskins at the plate when he tried to score from third on a grounder.

The 22-year-old Giménez added another impressive stop deep in the hole during the fifth inning but couldn’t nab speedy Segura at first.

Giménez also had two hits and went 7 for 15 during the series.

Bryce Harper started in center field for the first time with Philadelphia — he hadn’t played the position since 2018 with Washington. The Phillies are without outfielders Roman Quinn, Jay Bruce and Scott Kingery and have just four healthy outfielders on their 40-man roster.

Phillies: RHP Connor Brogdon was promoted from the alternate site and RHP Mauricio Llovera was sent down a day after making his major league debut.

Mets: OF Billy Hamilton was claimed off waivers by the Chicago Cubs after being designated for assignment Friday.