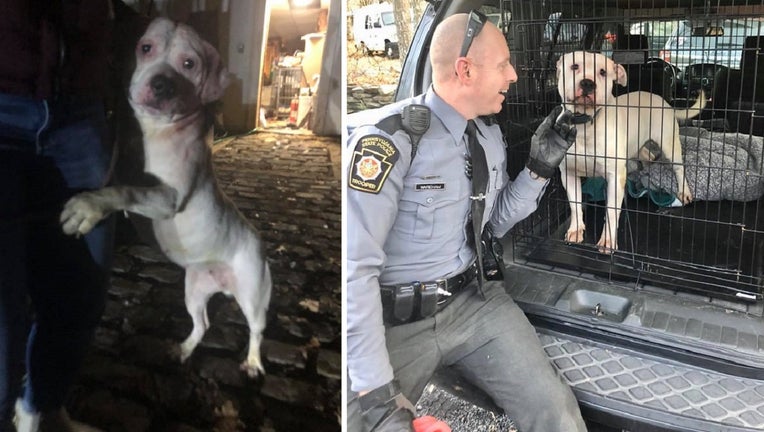 Pennsylvania State Trooper Robert Wareham fed two remaining dogs inside the home over the course of a few days to build their trust and ultimately rescue them. (Speranza Animal Rescue/Pennsylvania State Police)

An animal abuse investigation led state police to the basement of a home in Lehman Township on Nov. 14.

Volunteers from Speranza Animal Rescue in Mechanicsburg, nearly three hours away, agreed to meet troopers when local shelters were unable to accept the dogs.

“When we arrived our jaws dropped,” the shelter said in a Facebook post. “It was far worse than we could have imagined.”

Five dogs were discovered in small crates with feces piled everywhere, according to the shelter. The temperature inside the house was 16 degrees.

“Before stepping inside you could smell the stench," the shelter said. "It was overwhelming.”

Three female dogs were reportedly scared and growling, which shelter officials attributed to “pure fear.” After some coaxing, officials were able to leash the dogs and bring them outside, though “all they wanted to do was run back to their ‘home.’”

According to police, the two male dogs were aggressive and unable to be transported.

“It broke my heart knowing these two would have to stay another night in pure hell,” one shelter official said. “My heart should feel full knowing these three beautiful girls have a new beginning, but I feel defeated. Knowing I could not safely get the other two.”

“We would like to throw out a HUGE thank you to Trooper Wareham,” the shelter wrote in a Facebook post. “He has been feeding these boys over the past few days and they learned to trust him. This allowed them to get out of the house stress free and without incident.”

The two male dogs, Darren and Dorian, are now in the care of Speranza Animal Rescue, along with the three female dogs: Daria, Dana and Deena.

According to court records, the dogs’ owner had been incarcerated at Pike County Jail since Nov. 10 for alleged disorderly conduct.

Those interested in donating to Speranza Animal Rescue may do so here.