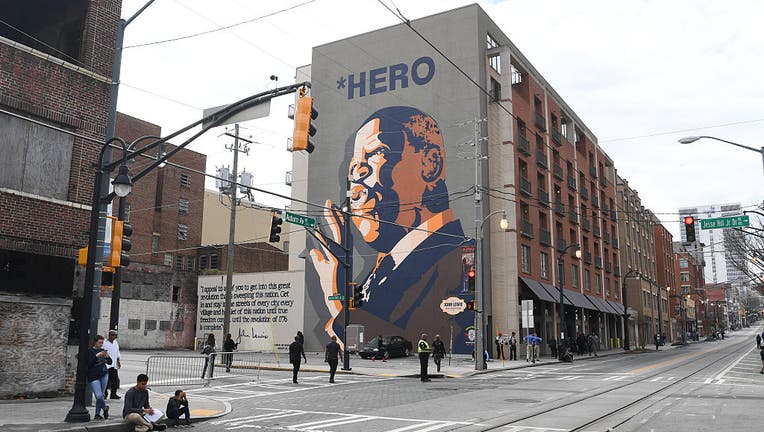 The mural of the late Congressman John Lewis in Atlanta. (Paras Griffin/Getty Images)

ATLANTA - Atlanta Mayor Keisha Lance Bottoms has ordered all flags at City of Atlanta facilities to be lowered to half-staff as an act of respect to honor the passing of Congressman John Lewis.

Lewis, who died Friday at age 80, was the youngest and last survivor of the Big Six civil rights activists who organized the 1963 March on Washington, and spoke shortly before the group’s leader, Rev. Martin Luther King Jr., gave his “I Have a Dream” speech to a vast sea of people.

In a statement by the Mayor's Office, Bottoms called the late representative of Georgia's 5th Congressional District "an American hero and one of the pillars of the civil rights movement."

“America knew him as a Civil Rights Icon, Congressional Giant, and a moral compass, but I knew him as a friend," Bottoms said. "The people of Atlanta often called upon Congressman Lewis for counsel, guidance, and assistance with getting into good trouble. No matter how busy his schedule, or important his Washington duties were, he answered."

The mayor said that Atlantans were "privileged to be represented by a leader with both a pure heart and an unshakable commitment to human rights."

READ ALSO: John Lewis: ‘Good troublemaker’ and tireless activist — a look at the life of the civil rights icon

She ordered the flags on all City of Atlanta facilities to be lowered until further notice.