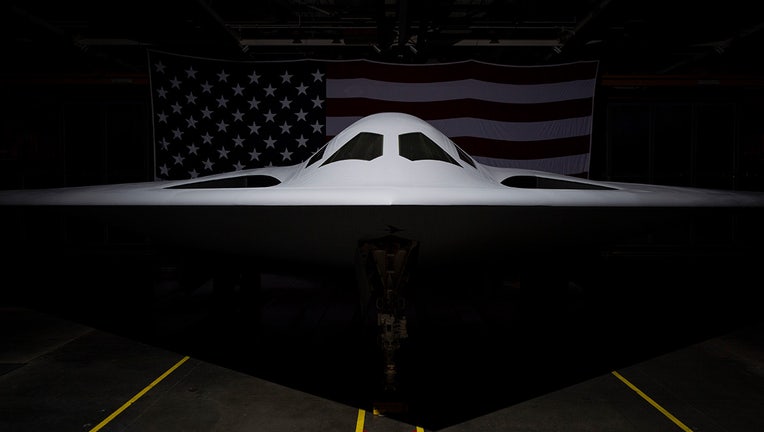 Northrop Grumman and the U.S. Air Force introduce the B-21 Raider, the world’s first sixth-generation aircraft.

WASHINGTON - America’s newest nuclear stealth bomber made its debut Friday after years of secret development and as part of the Pentagon’s answer to rising concerns over a future conflict with China.

The B-21 Raider is the first new American bomber aircraft in more than 30 years. Almost every aspect of the program is classified.

As evening fell over the Air Force’s Plant 42 in Palmdale, the public got its first glimpse of the Raider in a tightly-controlled ceremony. It started with a flyover of the three bombers still in service: the B-52 Stratofortress, the B-1 Lancer and the B-2 Spirit. Then the hangar doors slowly opened and the B-21 was towed partially out of the building, its wheels inching close to the outer pavement. 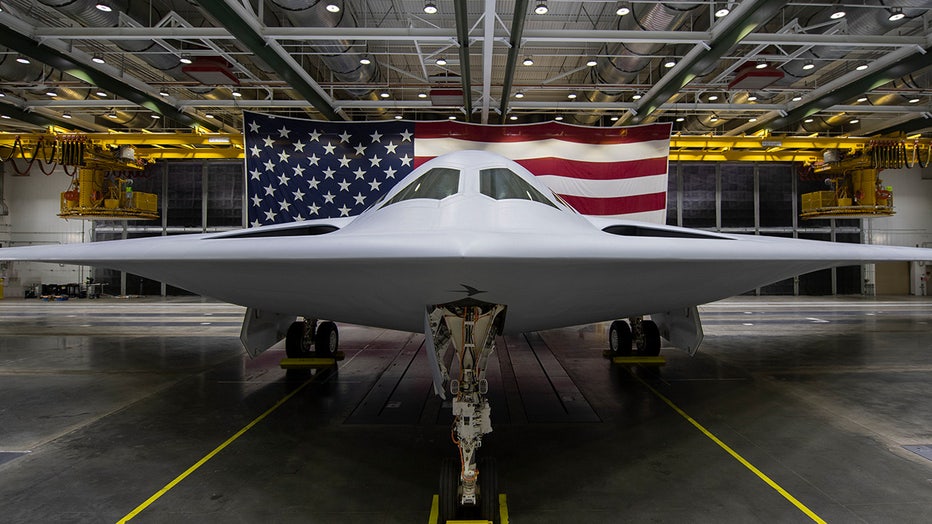 The B-21 Raider was unveiled to the public at a ceremony Dec. 2, 2022, inPalmdale, Calif. Designed to operate in tomorrow's high-end threat environment, the B-21 will play a critical role in ensuring America's enduring airpower capability. (U.S. Air Force photo)

"This isn’t just another airplane," Austin said. "It’s the embodiment of America’s determination to defend the republic that we all love."

The B-21 is part of the Pentagon’s efforts to modernize all three legs of its nuclear triad, which includes silo-launched nuclear ballistic missiles and submarine-launched warheads, as it shifts from the counterterrorism campaigns of recent decades to meet China’s rapid military modernization.

China is on track to have 1,500 nuclear weapons by 2035, and its gains in hypersonics, cyber warfare and space capabilities present "the most consequential and systemic challenge to U.S. national security and the free and open international system," the Pentagon said this week in its annual China report.

"We needed a new bomber for the 21st Century that would allow us to take on much more complicated threats, like the threats that we fear we would one day face from China, Russia, " said Deborah Lee James, the Air Force secretary when the Raider contract was announced in 2015.

While the Raider may resemble the B-2, once you get inside, the similarities stop, said Kathy Warden, chief executive of Northrop Grumman Corp., which is building the bomber.

"The way it operates internally is extremely advanced compared to the B-2, because the technology has evolved so much in terms of the computing capability that we can now embed in the software of the B-21," Warden said.

Other changes include advanced materials used in coatings to make the bomber harder to detect, Austin said.

"Fifty years of advances in low-observable technology have gone into this aircraft," Austin said. "Even the most sophisticated air defense systems will struggle to detect a B-21 in the sky."

Other advances likely include new ways to control electronic emissions, so the bomber could spoof adversary radars and disguise itself as another object, and use of new propulsion technologies, several defense analysts said.

"It is incredibly low observability," Warden said. "You’ll hear it, but you really won’t see it." 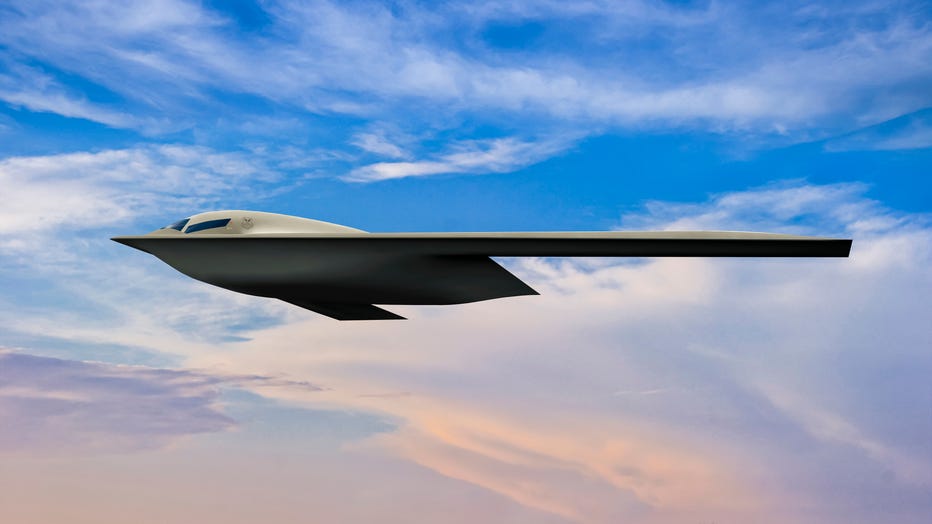 FILE - Shown is a B-21 Raider artist rendering graphic. The rendering highlights the future stealth bomber with Edwards Air Force Base, Calif., as the backdrop. (Courtesy of Northrop Grumman via U.S. Air Force)

Six Raiders are in production. The Air Force plans to build 100 that can deploy either nuclear weapons or conventional bombs and can be used with or without a human crew. Both the Air Force and Northrop also point to the Raider’s relatively quick development: The bomber went from contract award to debut in seven years. Other new fighter and ship programs have taken decades.

The cost of the bombers is unknown. The Air Force previously put the price at an average cost of $550 million each in 2010 dollars — roughly $753 million today — but it’s unclear how much is actually being spent. The total will depend on how many bombers the Pentagon buys.

"We will soon fly this aircraft, test it, and then move it into production. And we will build the bomber force in numbers suited to the strategic environment ahead," Austin said.

US Armed Forces: Quick history of the 6 military branches

The U.S. military is made up of the Army, Marine Corps, Navy, Air Force, Space Force, and Coast Guard. Here's a quick look at each service branch and its creation.

"It might be a big challenge for us to do our normal analysis of a major program like this," said Dan Grazier, a senior defense policy fellow at the Project on Government Oversight. "It’s easy to say that the B-21 is still on schedule before it actually flies. Because it’s only when one of these programs goes into the actual testing phase when real problems are discovered." That, he said, is when schedules start to slip and costs rise.

The B-2 was also envisioned to be a fleet of more than 100 aircraft, but the Air Force built only 21, due to cost overruns and a changed security environment after the Soviet Union fell.

Fewer than that are ready to fly on any given day due to the significant maintenance needs of the aging bomber, said. 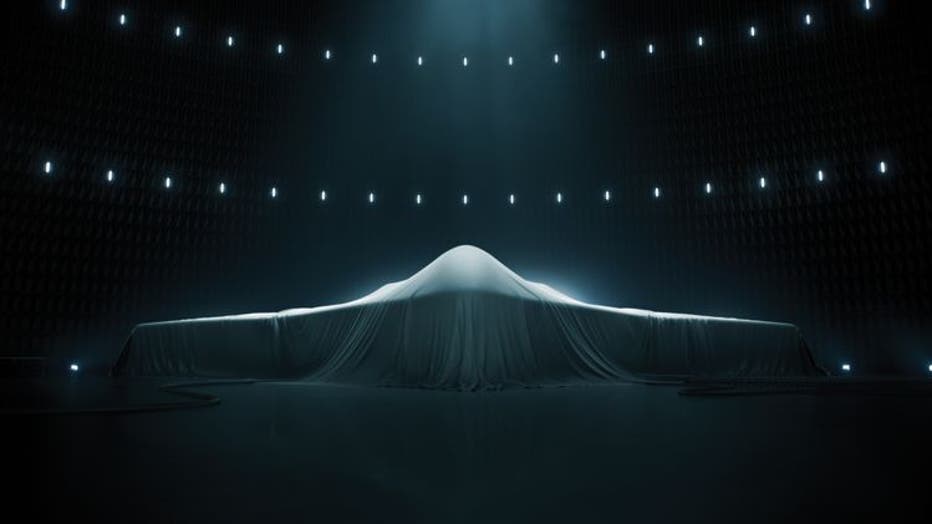 Northrop Grumman’s B-21 Raider will be unveiled on Dec. 2, 2022, at the company’s site in Palmdale, Calif., marking the first time the world’s first sixth-generation aircraft will be seen by the public. (Credit: Northrop Grumman)

The B-21 Raider, which takes its name from the 1942 Doolittle Raid over Tokyo, will be slightly smaller than the B-2 to increase its range, Warden said. It won’t make its first flight until 2023. However, Warden said Northrop Grumman has used advanced computing to test the bomber’s performance using a digital twin, a virtual replica of the one being unveiled.

Ellsworth Air Force Base in South Dakota will house the bomber’s first training program and squadron, though the bombers are also expected to be stationed at bases in Texas and Missouri.

U.S. Sen. Mike Rounds, a Republican of South Dakota, led the state’s bid to host the bomber program. In a statement, he called it "the most advanced weapon system ever developed by our country to defend ourselves and our allies."

Northrop Grumman has also incorporated maintenance lessons learned from the B-2, Warden said.

In October 2001, B-2 pilots set a record when they flew 44 hours straight to drop the first bombs in Afghanistan after the Sept. 11 attacks. The B-2 often does long round-trip missions because there are few hangars globally that can accommodate its wingspan, which limits where they can land for maintenance. The hangars also must be air-conditioned because the Spirit’s windows don’t open and hot climates can cook cockpit electronics.

The new Raider will also get new hangars to accommodate the size and complexity of the bomber, Warden said.

However with the Raider’s extended range, ’it won’t need to be based in-theater," Austin said. "It won’t need logistical support to hold any target at risk."

A final noticeable difference was in the debut itself. While both went public in Palmdale, the B-2 was rolled outdoors in 1988 amid much public fanfare. Given advances in surveillance satellites and cameras, the Raider was just partially exposed, keeping its sensitive propulsion systems and sensors under the hangar and protected from overhead eyes.

"The magic of the platform," Warden said, "is what you don’t see."