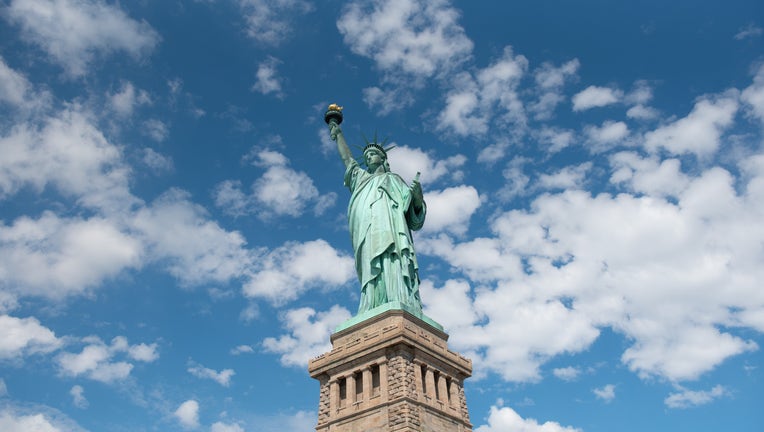 Long before a Trump administration official suggested the poem inscribed on the Statue of Liberty welcomed only people from Europe, the words captured America's promise to newcomers at a time when the nation was also seeking to exclude many immigrants from landing on its shores.

A biographer of poet Emma Lazarus on Wednesday challenged the comment by the acting director of U.S. Citizenship and Immigration Services, explaining that Lazarus' words were her way of urging Americans "to embrace the poor and destitute of all places and origins."

Lazarus wrote "The New Colossus" in 1883, one year after Congress passed the Chinese Exclusion Act, which banned laborers from China. The poem is best known for its line about welcoming "your tired, your poor, your huddled masses yearning to breathe free."

Beginning in the 1930s, supporters of immigration began using the poem to bolster their cause. Biographer Esther Schor said Lazarus was "deeply involved" in refugee causes.

Ken Cuccinelli suggested Tuesday in an interview with NPR that the line should be changed to "give me your tired and your poor who can stand on their own two feet and who will not become a public charge."

Trump official: Statue of Liberty poem is about immigrants from Europe

He spoke a day after the administration announced it would move to deny green cards to many migrants who use Medicaid, food stamps, housing vouchers or other forms of public assistance, under existing rules that require people trying to gain legal status to prove they would not be a "public charge," or burden to the government. Those rules would exempt active-duty military members, refugees or asylum seekers.

Cuccinelli, who has said his family is of Irish and Italian origin, told CNN that the poem referred "to people coming from Europe where they had class-based societies."

Immigrants from around the world rejected that assertion. The poem itself says of the statue, "From her beacon-hand glows world-wide welcome."

"European immigrants are so offended that we would be in a more privileged position or looked upon more favorably because of that," said Fiona McEntee, a native of Ireland who settled in the U.S. in 2005 and is now an immigration lawyer based in Chicago. "I just think of the Irish immigrants that came over back in the 1800s, early 1900s. That's really similar to a lot of the immigrants today."

As tourists sailed and walked around the statue on Wednesday, Primoz Bedenk, an entrepreneur from Slovenia said Lazarus' poem was "not meant to exclude or select certain people."

"From the first day, they were words that welcomed everyone, not just those who suit today's establishment," Bedenk said.

The administration, which has made curbing immigration one of its top priorities, has challenged the poem before. Two years ago, senior Trump adviser Stephen Miller, in defending a proposal to favor English-speaking immigrants, argued that the poem is "not actually part of the original statue" because it was not inscribed in the base until 1903, 17 years after the monument was unveiled.

Decades after ships stopped arriving at Ellis Island within sight of the statue, immigrants say it is still a powerful symbol in their countries of origin.

"It tells everyone around the world to come to the United States with the possibility of building a better life," said Seydi Sarr, a 44-year-old naturalized immigrant from Senegal. "That's the dream the United States is selling. I didn't have a dream of being here, but when the opportunity came I said, 'Yes, that allows me to move up.'"

Sarr is an immigrant-rights and community organizer in Detroit. She said the Trump administration has made it clear where the U.S. stands on immigration and people of color.

The statue was originally conceived by a Frenchman as a gift to the U.S. for abolishing slavery in 1865. But people of color have long struggled with whether the statue's promise included them. The Cleveland Gazette, a black newspaper, editorialized in 1886, during a time of state-sanctioned racial discrimination, that the statue's torch "should not be lighted until this country becomes a free one in reality."

Julieta Garibay came to the U.S. from Mexico when she was 12. Her family settled in Austin, Texas. She remembers learning Lazarus' poem and reciting the Pledge of Allegiance. But she also remembers being mocked for her accent and being called an anti-Mexican slur.

"From very early on, I knew I was not from this country," said Garibay, now a naturalized U.S. citizen and organizer for the immigrant advocacy group United We Dream.

Nerveine Ouida left Egypt in 2012, sought asylum in the U.S. and is now an American citizen who lives outside Houston. She said that she understood why the government might want to limit protections for people who use public benefits, though she supported providing help to refugees and asylum seekers who need it.

"Liberty means that you need still to have some rules to protect your own country," she said. "Making rules about who goes in, who comes out, this is not against liberty. This is to protect the people who are living here."