A mother said in a Facebook post that her son went swimming recently off the coast of Ocean City and started noticing little spots developing all over his body, which progressed into something worse.

OCEAN CITY, Md. - A mother says her son was covered in wounds from a flesh-eating bacteria after recently visiting a Maryland beach.

Brittany Carey said in a Facebook post that her son went swimming on June 23 off the coast of Ocean City near the Harry W. Kelley Memorial Bridge. The next day, she started noticing “little spots developing all over his body,” which she said progressed into something more serious.

“Tuesday morning there were open wounds developing but I had thought he was scratching them, making them worse,” Carey wrote in the the post. “Only to find when I picked him up Tuesday they were a lot bigger and a lot more. Off to the hospital we went to be told it was really nothing and an antibiotic that only made it worse.”

According to the Centers for Disease Control and Prevention, Vibrio bacteria can be found in coastal waters and thrives when water temperatures are warmer. Certain Vibrio bacteria can cause an infection when an open wound is exposed to salt water or brackish water.

The CDC says that most people become infected by eating raw or undercooked shellfish — particularly oysters. Some Vibrio infections, such as a Vibrio parahaemolyticus, can cause diarrhea and other symptoms that last about three days. But people with a Vibrio vulnificus infection can get very sick, according to the CDC.

Cases of infection from the bacteria Vibrio vulnificus, which can lead to the flesh-eating disease necrotizing fasciitis, have been on the rise in some coastal regions where the bacteria are not normally found. A team of researchers believe it may have to do with rising ocean temperatures. 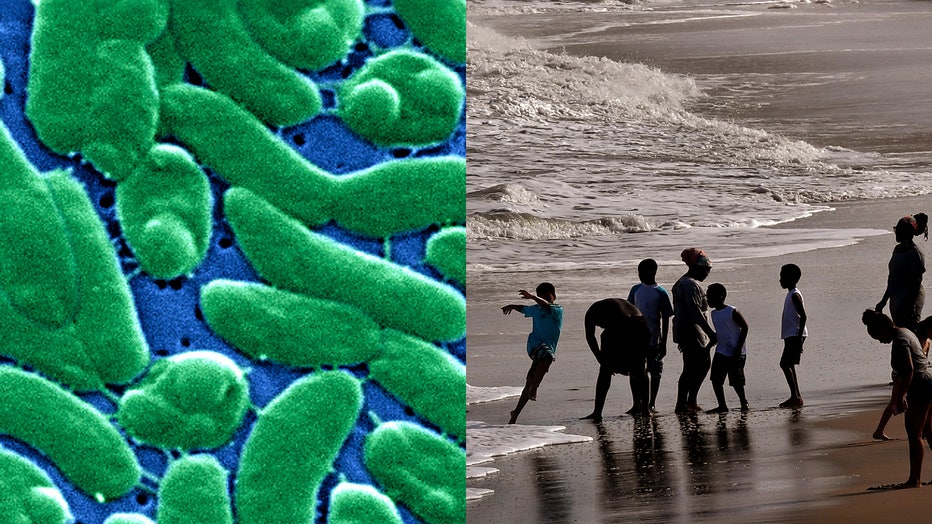 A grouping of Vibrio vulnificus bacteria is shown in a magnified image, alongside beachgoers enjoying the coast of Ocean City, Maryland. (Photo by Michael S. Williamson/The Washington Post via Getty Images)

Necrotizing fasciitis destroys tissue under the skin and spreads rapidly. Caused by more than one type of bacteria, it can enter the body through a cut or scrape. If not treated quickly with antibiotics, the infection can be fatal, according to the CDC.

“I thought long and hard about sharing this, but a friend of mine said it would be a great PSA for everyone to see,” Carey wrote in the post, who added that her son is now recovering.

Cases of ‘flesh-eating’ bacterial infections that were contracted after swimming have been reported in other areas as well, including the Florida’s Gulf Coast, with some being fatal.

Lynn Fleming, 77, stumbled and fell into the water off Anna Maria Island while her family was visiting from Pittsburgh. Her son said she had “just a small cut” on her leg and they didn't think much of it.

The wound swelled up and continued to bleed, leading her to urgent care where she was prescribed antibiotics and given a tetanus shot. Fleming was taken a day later to the hospital, where she was diagnosed with necrotizing fasciitis and died Thursday after suffering two strokes and organ failure.

Another girl, 12-year-old Kylei Brown, was diagnosed with necrotizing fasciitis and almost lost her leg after visiting Destin, Florida. Her mother, Michelle Brown, said she believes her daughter contracted the flesh-eating bacterial infection through a scrape on her big toe.

"It is CRITICAL to be aware of the signs and symptoms and getting treatment quickly," Michelle Brown wrote in a Facebook post about the health scare.

A Florida man was recovering after he became infected with the Vibrio Vulnificus bacteria that rapidly spread across one of his arms. Tyler “TK” King, of Santa Rosa Beach, said he never got into the water and was going about “an average day” when he contracted the flesh-eating bacteria.

“I had my morning smoothie and did some light exercise. I made my way down to an area on 30A to do a photoshoot,” King said. “We started with a short paddle across a dune lake to get some cool pictures. I NEVER got into the water.”

King said his arm started swelling and looked like a “red marshmallow.” The rapid growth of the rash prompted him to go to the emergency room. He said he did not have any open wounds nor did he swim in any water that day and it remained unclear how he became infected.

“The infection from the bacteria did not reach the point of it causing Necrotising Fascitiitis and actually destroying my muscle tissue and arm only because I acted quickly on getting medical treatment,” he said. “As quickly as it was spreading, only half a day or so more could have made some serious life altering changes to my body.”