A U.K. woman who severely broke her leg during her bachelorette party is thanking her bridesmaid – who has no formal first-aid training –for her quick thinking that likely saved the limb in its entirety.

During her pre-marriage celebrations in Center Parcs, a series of vacation villages in Europe, 24-year-old Lula O’Neins says she tripped and broke both her tibia and fibula in one of her legs. The bones were broken in two places, causing her leg to be “bent out of shape,” SWNS reports.

Her badly broken leg was saved by her 26-year-old sister and bridesmaid, Gabrielle George, who “pulled Lula’s leg to straighten it out,” according to the news outlet. The accident occurred just eight weeks before her wedding day. 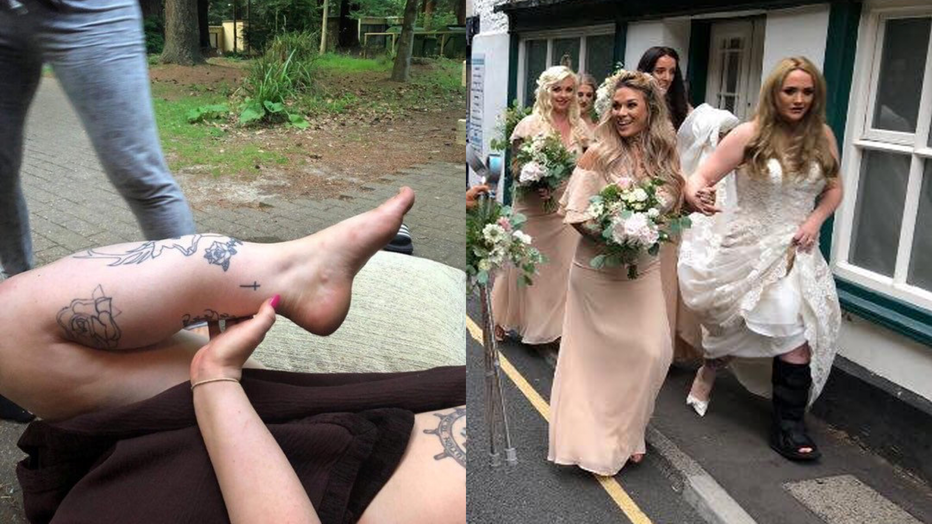 The 24-year-old claims she nearly lost her leg as a result of the accident. (SWNS)

O’Neins was eventually taken to Royal United Hospitals in Bath, Somerset, England, after reportedly waiting for an ambulance for six hours.

Emergency medical officials reportedly told the 24-year-old she would’ve likely had to have the leg amputated had it not been for her sister’s quick thinking, as “she would have lost the blood supply to the limb due to how badly broken it was,” SWNS reports. 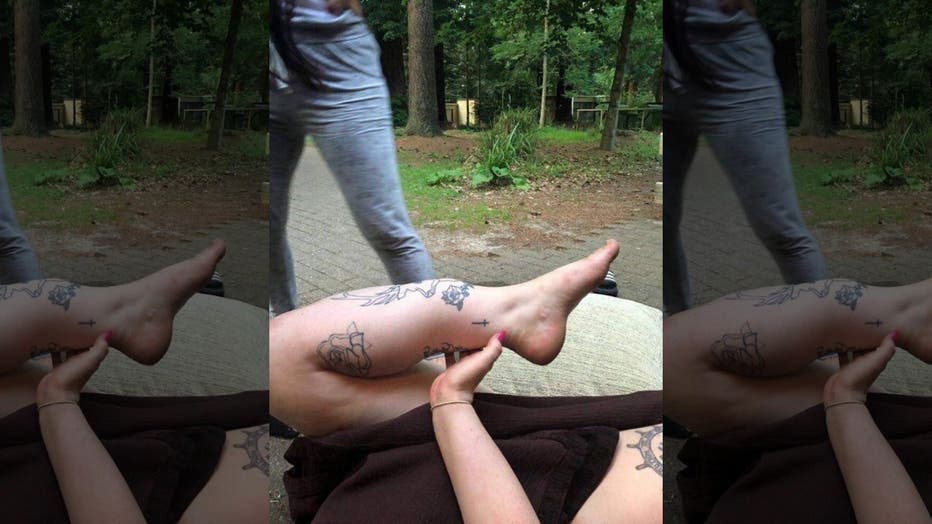 O'Neins said medics told her she could have lost her leg had her sister straightened it out. (SWNS)

"My sister and bridesmaid, Gabrielle, had booked two log cabins with hot tubs for the weekend for us to let our hair down. The girls planned such a fun trip. It was supposed to be a relaxing break as planning the wedding had been pretty stressful,” O’Neins told the news outlet. “We had a great time and I wasn't even drunk when I tripped over and my leg just went 'snap.’”

“I couldn't get up. I was in so much pain. My leg was bent back the wrong way. It was all in the wrong place,” she added. 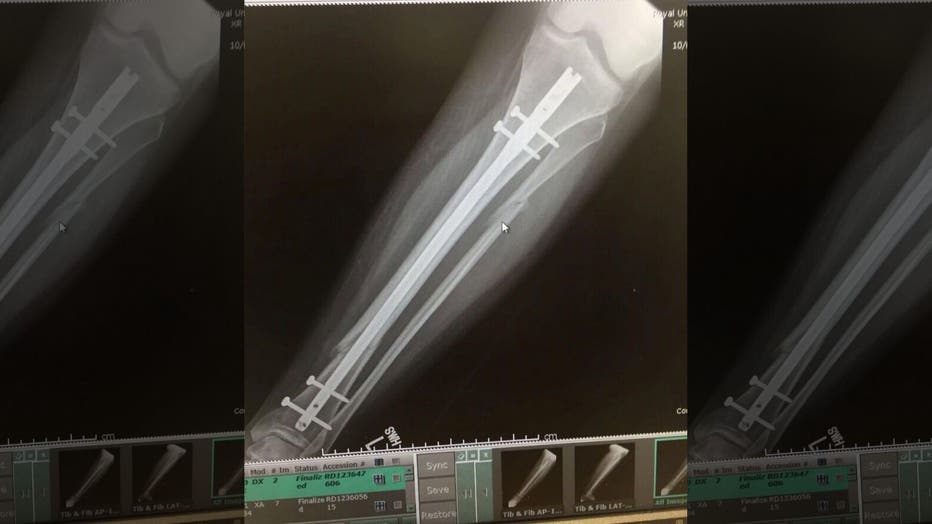 "As we were waiting for it to show up, Gabrielle decided to push my leg back into place — thinking it might help, although she has no first-aid training. It’s very lucky that she did,” she continued, adding she “screamed as [she] felt it pop.”

O’Neins required extensive surgery to repair her leg. A rod was placed in the newlywed's leg, and she also had pins inserted into her ankle and knee to help her limb heal properly. She told SWNS she spent 12 days in the hospital following the procedure. 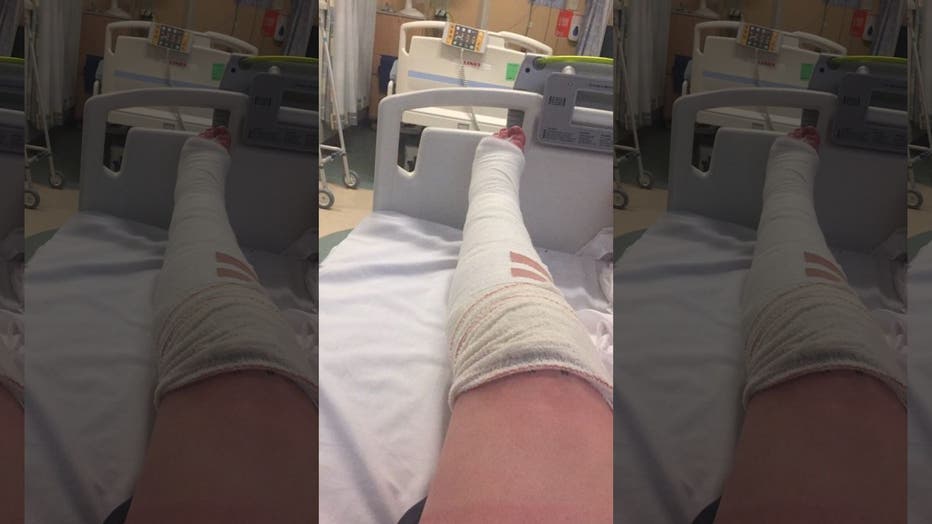 O'Neins was forced to wear a boot at her wedding. (SWNS)

On her wedding day two months later, the bride wasn’t able to wear the high heels she picked out, sporting a boot on her injured leg instead. She also spent her vacation in Italy on crutches.

“I might have spent my wedding day and honeymoon limping around in a protective boot and on crutches, but it's a small price to pay to still have my leg intact,” she said.

“I was sad I wasn't able to wear the beautiful heels I'd chosen, but I knew I'd be comfier in flats anyway. Luckily, my long dress covered my boot so guests couldn't see it as I hobbled down the aisle,” she said, adding she “ditched [her] crutches” to limp toward her now-husband, Alex, while walking down the aisle. 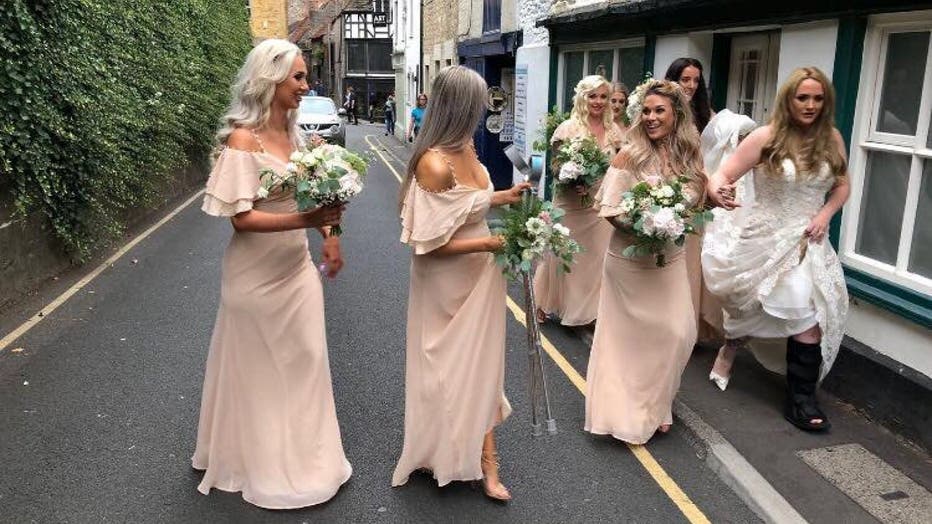 At her wedding, O'Neins said she was "on cloud nine" and didn't even think about her "dodgy leg." (SWNS)

O’Neins said she spent the rest of her wedding day “on cloud nine” and had no cares about her “dodgy leg.”

"Even now she likes to remind me just how much I owe her,” O’Neins added of her sister. “But it is true, without her quick-thinking actions it could have been a very different story."