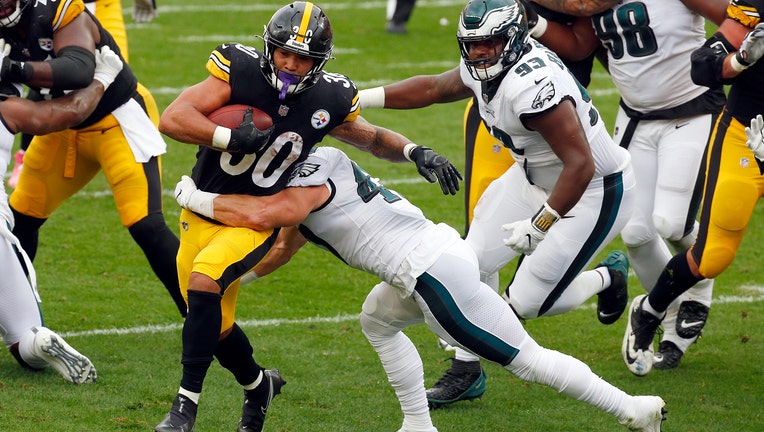 PITTSBURGH, PA - OCTOBER 11: James Conner #30 of the Pittsburgh Steelers rushes against Trevor Williams #41 of the Philadelphia Eagles during the first half on October 11, 2020 at Heinz Field in Pittsburgh, Pennsylvania. (Photo by Justin K. Aller/Get

PITTSBURGH - Rookie wide receiver Chase Claypool scored four touchdowns, including the clincher with 2:59 remaining, and the Pittsburgh Steelers remained unbeaten with a 38-29 win over the Philadelphia Eagles on Sunday.

Claypool, a second-round pick from Notre Dame, raced down the slot, hauled in a dart from Ben Roethlisberger and went the rest of the 35 yards to the end zone as the Steelers improved to 4-0 for the first time since 1979.

A native of Abbottsford, British Columbia, Canada, Claypool finished with seven receptions for 110 yards and three scores and added a 2-yard touchdown run on a jet sweep. Claypool became the first Canadian-born NFL player with three receiving TDs in a game since Joe Rooney did it for the Duluth Eskimos on Oct. 23, 1927.

Roethlisberger completed 27 of 34 passes for 239 yards and the three scores to Claypool. James Conner ran for 44 yards and a touchdown as the Steelers showed little rust despite having an unexpected bye week last Sunday after the NFL scheduled their trip to Tennessee while the Titans dealt with a COVID-19 outbreak.

Carson Wentz threw for 258 yards and two touchdowns but was also picked off twice, both times by Steelers cornerback Steven Nelson. Miles Sanders ran for 80 yards and two scores in his return to his hometown. Travis Fulgham caught 10 passes for 152 yards and a touchdown to give Philadelphia's injury-ravaged receiving group a needed boost, but the Eagles (1-3-1) couldn't pull off a second straight road win.

The Steelers scored on five straight possessions to take a 31-14 lead in the third quarter, but the Eagles stormed back behind Wentz, who connected with Greg Ward for an 8-yard touchdown pass and found Fulgham for a 4-yard score with 11:27 left.

Philadelphia, which at one point converted 10 straight third downs, had a chance to take the lead following a fumble by Steelers tight end Eric Ebron but Jake Elliott's 57-yard field-goal attempt sailed wide right with 3:18 to go.

Pittsburgh took over and a personal foul facemask by the Eagles pushed the Steelers into Philadelphia territory. Facing third-and-8 from the Philadelphia 35, Claypool lined up in the slot, zipped past Eagles linebacker Alex Singleton and sprinted into the end zone while the 4,708 fans allowed into Heinz Field erupted.

Nelson picked off a desperation heave from Wentz to end Philadelphia's next possession and the Steelers were unbeaten a quarter of the way through the season for the first time in 41 years. The 1979 team won the franchise's fourth Super Bowl in six years. This group has work to do in what looks to be a stacked AFC, but they've avoided the early pratfalls that have plagued them in recent years.

Eagles: OL Lane Johnson was carted to the locker room in the third quarter with an ankle injury. Johnson has been dealing with a balky ankle all season and underwent a procedure last week to remove a cyst that had been bothering him. LB Duke Reily left in the fourth quarter with an undisclosed injury.

Steelers: Lost Pro Bowl left guard David DeCastro in the first quarter with an abdominal injury. Rookie Kevin Dotson filled in. WR Diontae Johnson left with a back injury and did not return after a first-quarter punt return.

Eagles: Start a three-game homestand next Sunday against Baltimore.

Steelers: Finish a stretch of four straight games at Heinz Field when they host Cleveland next Sunday. The AFC North rivals split in 2019, each team winning on its home field.