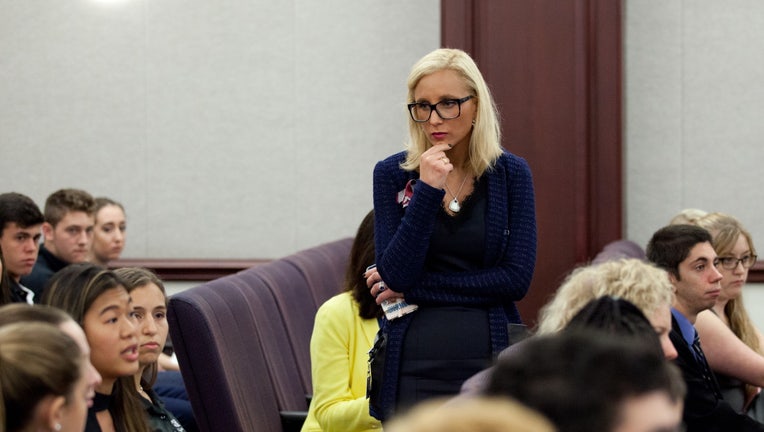 Florida Senator Lauren Book listens to students from Marjory Stoneman Douglas High School during a discussion on gun policies at the Florida State Capitol. (Photo by Charlotte Kesl for The Washington Post via Getty Images)

TALLAHASSEE, Fla. - Florida State Sen. Lauren Book often has told the story about how she was sexually abused by her nanny for six years when she was a child. She channeled the pain into a lifetime of helping other abuse survivors.

Now after years of working hard to heal herself and restore her life — running a non-profit to help victims, getting married, having children and winning her Senate seat — Book has been victimized again, this time by someone trying to extort her by threatening to reveal nude photos that were stolen from her.

What's worse: During the investigation, she learned that the images had been bought and traded online since 2020.

Book is taking action as only a legislator can. While the pain came rushing back, so did her spirit to fight, and she's seeking a new law to try to prevent others from being victimized.

Book vented her anger in the phone interview with the AP Monday night as she described the international trade and sale of images stolen from people without their knowledge. She cursed loudly at times, and sometimes choked back tears. She called it a sick, perverted subculture that pays more for images of celebrities and elected officials, but which also victimizes women who aren't well known.

"Truth be told, if it weren’t for my children, I would have ended my life," she said. "It brought up all of the stuff. All of it that you think that you’ve gotten under your belt, that you’ve fixed it and you’ve changed it and then all of a sudden here it is in front of your face."

And the conversations people had on the website made the horror worse.

"They were reading about who I was and talking about how I’m a survivor of rape, so let’s try to get some rape videos. Can we get some of her getting raped, killed, tortured? Can we make some of that? Can we find it? How can we get it?" Book said.

Book had images of her and her husband on her phone, and said she shared a post-operation photo of her lumpectomy scar with a friend. She doesn't know how they were stolen. But she said investigators told her the images the teenager used to try to extort her were sent from virtual private networks in Sweden and Russia.

As a 17-year-old daughter of an influential lobbyist, she found the courage while battling anorexia, sleepless nights and crying fits to go to Tallahassee and convince lawmakers and then-Gov. Jeb Bush to pass a law requiring HIV tests for rape suspects.

Now she's a 37-year-old senator, and feels blessed to be in a position to fight back, with the resources to hire an attorney to have images removed from websites. Many others don't.

Still, while the abuse she suffered into her teenage years had a beginning and an end — the nanny was prosecuted and imprisoned — this case will go on forever.

"There are still things up there. Still. They’ll never be gone. People were buying it, people were trading it, and this is not unique. This is happening every single day, to women predominantly," she said.