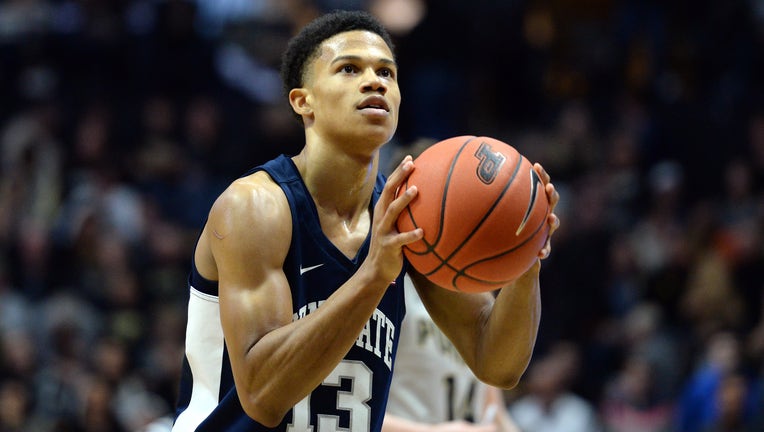 STATE COLLEGE, Pa. - Iowa State guard Rasir Bolton said he decided to leave Penn State last spring because of a comment by coach Pat Chambers, who said the player had a noose around his neck.

Bolton, who is Black, disclosed the reason for his departure Monday in a tweet he titled “a noose around my neck.”

Chambers, who is white, tweeted an apology the same day.

Bolton tweeted that Chambers made the noose comment after the coach returned from a one-game suspension for shoving Nittany Lions player Myles Dread in the chest during the previous game.

Bolton, who was a starter, scored seven points in the game Chambers missed and shot poorly from the field.

In an interview with The Undefeated, Bolton said Chambers told him the next day he knew the freshman was under a lot of pressure and wanted to help him. The coach said he wanted to relieve some of the pressure the player felt.

“You can talk to me about anything. I need to get some of this pressure off you,” The Undefeated quoted Chambers as saying. "I want to loosen the noose that’s around your neck.”

In his tweet on Monday, Bolton said he was offended by the reference to the noose.

“A noose: symbolic of lynching, slavery and racial terrorism,” he tweeted. "Due to other interactions with (Chambers), I knew this was no slip of the tongue. I reported this immediately to my academic advisor. I confronted Coach Chambers. I spoke directly with the (athletic director’s) office myself.”

Chambers apologized to Bolton and his family in his tweet Monday.

“I’ve realized the pain my words and ignorance caused Rasir Bolton and his family and I apologize to Rasir and the Bolton family for what I said,” Chambers said. “I failed to comprehend the experiences of others, and the reference I made was hurtful, insensitive and unacceptable. I cannot apologize enough for what I said, and I will carry that forever.”

Bolton also told The Undefeated Chambers told him he was impressed with how “organized” and “well-spoken” his parents were. Bolton said he felt the comments were a familiar, patronizing insult against Black people.

Chambers told the online publication he did not recall making that comment.

Bolton averaged 11.6 points in his freshman year at Penn State. He was granted immediate eligibility at Iowa State and averaged 14.7 points this past season, which was shortened by the coronavirus pandemic.

Bolton said he was speaking for himself in the tweet.

“There is a serious need for change in the way players are protected and helped across the country when faced with these situations,” he tweeted. "Surface level resources are not good enough. In most cases, it is the coach who is protected, while the player is left to deal with (it) or leave. BE the change you want to see.”