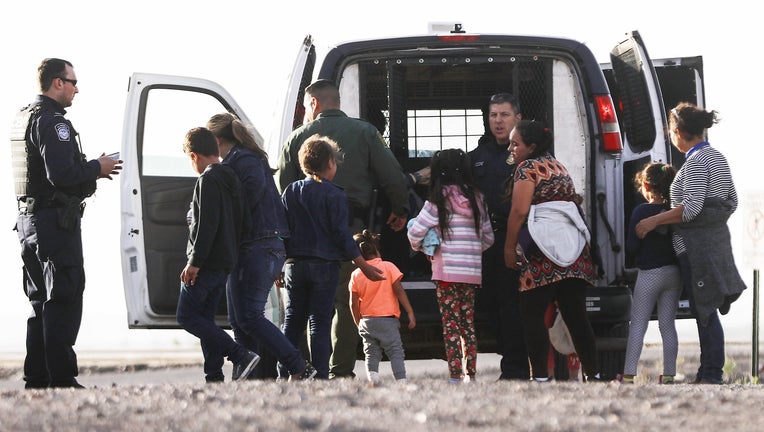 Migrants are detained by U.S. Customs and Border Protection agents along the U.S. border. (Photo by Mario Tama/Getty Images)

CLINT, Texas - Lawmakers on Friday were calling for swift change after reports this week of more than 250 infants, children and teens being held inside a windowless Border Patrol station, struggling to care for each other with inadequate food, water and sanitation.

It's a scene that is being repeated at other immigration facilities overwhelmed with too many migrant children and nowhere to put them.

"This facility wasn't even on our radar before we came down here," said law professor Warren Binford, a member of the team that interviewed dozens of children this week detained in Clint, about a half-hour drive from El Paso. Fifteen children had the flu, another 10 were quarantined.

At another Border Patrol station in McAllen, Texas, attorney Toby Gialluca said all the children she talked to last week were very sick with high fevers, coughing and wearing soiled clothes crusted with mucus and dirt after their long trip north.

"Everyone is sick. Everyone. They're using their clothes to wipe mucus off the children, wipe vomit off the children. Most of the little children are not fully clothed," she said.

At both detention facilities, the children told attorneys that guards instructed girls as young as 8 to care for the babies and toddlers.

State and federal elected officials Friday demanded change about conditions at Clint, McAllen and other Border Patrol stations. There was plenty of angry fingerpointing as well.

"Every child who is not being taken care of adequately at the border, Congress is an accomplice to any harm they suffer," he said.

Oregon's Sen. Jeff Merkley pushed the Department of Homeland Security to publish a remediation plan "to immediately end these abuses." He gave them a deadline of July 12, tweeting: "Children are being held in appalling and unacceptable conditions. Detained children are being left to care for each other - including, in one case, a two-year-old who was left with no diapers. @DHSgov needs to tell us what their plan is to fix this, NOW."

Republican Congressman Will Hurd, whose district includes Clint, said the tragic conditions "further demonstrates the immediate need to reform asylum laws and provide supplemental funding to address the humanitarian crisis at our border."

His Democratic counterpart, Congresswoman Veronica Escobar of El Paso, said she has already asked the Customs and Border Protection commissioner for a "full accounting" of the situation.

"This is a dark moment for our country, and history will not be kind to the perpetrators of this cruelty," Gillibrand said. "All Americans should be alarmed and demand an end to this immediately."

Border Patrol stations are designed to hold people for less than three days, but some children held in Clint and McAllen have been in there for weeks. Legally, migrants under 18 should be moved into Office of Refugee Resettlement care within 72 hours.

But federal officials have said they have hit a breaking point. That's in part because over the last year, migrant children have been staying longer in federal custody than in the past, leading to a shortage of beds in facilities designed for longer-term stays.

The lawyers inspected the Border Patrol facilities as part of a Clinton-era legal agreement known as the Flores settlement that governs detention conditions for migrant children and families.

In an emailed statement Friday, Customs and Border Protection said the agency leverages its limited resources to provide "the best care possible to those in our custody, especially children."

The statement said "our short-term holding facilities were not designed to hold vulnerable populations and we urgently need additional humanitarian funding to manage this crisis."

In addition, the agency said all allegations of civil rights abuses or mistreatment are taken seriously and investigated.

He said Customs and Border Protection stations are holding 15,000 people - more than three times their maximum capacity of 4,000.