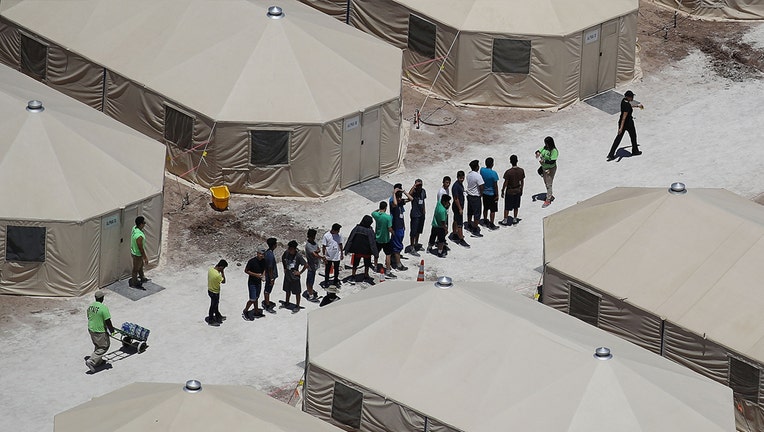 OKLAHOMA CITY - Due to the overwhelming number of migrants entering the United States at the Southwest border, the Trump Administration has decided to temporarily hold 1,400 unaccompanied migrant children at Fort Sill, an Oklahoma military base and former WWII Japanese-American internment camp, until they can be placed into the custody of an adult relative.

The Department of Health and Human Services oversees the Unaccompanied Alien Children Program and was charged with vetting and selecting the facility that will be used to temporarily hold the overflow of unaccompanied minors. Before settling on Fort Sill, HHS also considered Malstrom Air Force Base, where over 100 nuclear warhead-tipped ballistic missiles are buried underground, and Fort Benning in Georgia, an active military base that houses 120,000 people.

HHS operates a network of over 160 facilities and programs in 23 states, maintaining a mix of “standard” beds which are available year-round and “temporary” beds which are added as needed. The need for temporary beds has increased drastically in recent years.

Last week, U.S. Customs and Border Protection released data that reveals the scope of migration at the southwest border for fiscal year 2019.

As a result, CBP and HHS programs are increasingly strained.

On May 20, CBP announced that it had to erect two temporary steel-framed shelters, one in Donna and the other in El Paso, Texas, to accommodate the more than 400 percent increase in family apprehensions it had made since October of 2018.

The Unaccompanied Alien Children Program, which served less than 8,000 children annually for the first nine years that it was in operation, is now dealing with tens of thousands of children each year. In 2018, 49,100 children were referred to the program, and in 2016, a record 59,170 referred children went through the program.

CBP's data shows that 56,278 unaccompanied minors were taken into custody by the end of May, and with four additional months in the fiscal year, it is almost certain that HHS will be seeing a new record number of referrals.

Using military bases to accommodate such influxes of migrants is not unusual. The Obama Administration opened temporary holding facilities at military bases in California, Texas, and Oklahoma in 2014, and Fort Sill was one of them.

Fort Sill has a long history of falling at the center of national security events. Spurred by a rash of fear following the bombing of Pearl Harbor on December 7, 1941, President Roosevelt issued an Executive Order to relocate all persons of Japanese ancestry out of the Pacific military zone and into inland holding facilities, Fort Sill included.

The U.S. government told internees that they were being held for their own protection, to which one internee responded, "If we were put there for our protection, why were the guns at the guard towers pointed inward, instead of outward?"

117,000 people of Japanese decent, two-thirds of whom were native-born U.S. citizens, were ordered to pack up their most important belongings and head to assembly centers where they would be assigned to a permanent relocation center. The point was to isolate anyone with ties to Japan as far away from the coast possible in the name of national security.

In 1988, Congress acknowledged that the internment was unjust, issued an apology, and passed a law that provided a $20,000 cash payment to every internee.

Tom Ikeda, executive director of Densho, an organization that documents the history of the United States' internment of Japanese people, referred to Fort Sill as "a place layered in trauma." He pointed to its use as a boarding school for Native American children and as a prisoner-of-war camp for Apache tribal members.

"Sites like this need to be permanently closed, not recycled to inflict more harm," Ikeda said Wednesday in a statement. "We need to stay vigilant and we need to be showing up at these places in protest. No one showed up for Japanese Americans during WWII, but we can and we must break that pattern now."