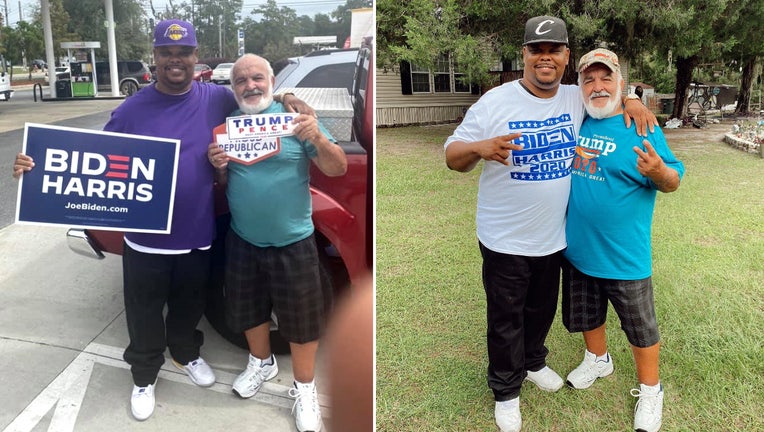 HINESVILLE, Ga. - Two longtime friends in Georgia are proving that people on either side of the political aisle can still get along during a heated election season.

Patrick Underwood says he and Frank Scozzafva have been friends for 30 years. They met when Underwood was a child and his dad was stationed at Fort Stewart in Georgia, WJCL reports.

RELATED: Candidates head to Florida, zero in on the battleground state

"Me and Frank always talk politics," Underwood told the news outlet. "I just got so frustrated when I saw people bashing Trump supporters all the time, calling them not good people."

When Underwood ran into Scozzafva at a gas station, he asked his friend to pose for a photo. Each man smiled for the camera, holding signs supporting their presidential candidates.

“We took a picture where he held his Trump [sign], I held my Biden [sign],” Underwood told WSAV. “Just because of who we vote for doesn’t mean we’re bad people. I said, ‘You know Frank, you’re a good guy. I don’t care that you support Trump.'”

Underwood posted the photo to Facebook with the caption, "I tell people just because we have a difference of opinion doesn't mean we can't stay friends. Frank [has] been my friend since 1990. You vote for who you think can make a difference in the world."

The post prompted people from across the political spectrum to applaud the two for their message of mutual respect.

"This is how everyone should be," one person commented. "We can be different in opinions as long as respect and humanity are always shown!"

Another person responded, "Exactly! Wish more people would think like this."

Scozzafva said that even though the two support different candidates, they can both agree that their friendship will last beyond the Nov. 3 election.

"Whoever wins, wins, and then we move on," Scozzafva said. "We're gonna be friends no matter who wins."

"Let's stop all the division," Underwood added. "We can still be friends and have differences of opinion. I'm trying to teach my children this too."