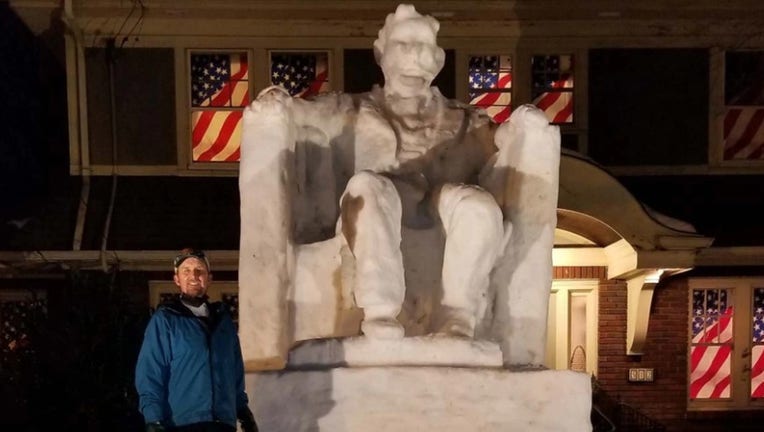 Robert Schott has built epic snow sculptures on the front lawn of his Cranford home for years. (Robert Schott)

Snow days are serious business for one man in New Jersey.

Robert Schott has built epic snow sculptures on the front lawn of his Cranford home for years, and a perfect storm made it possible for him to create a 14-foot Abraham Lincoln just in time for Presidents Day. With a little help from two plywood tiers, Schott constructed a remarkable rendition of the iconic statue of the 16th president at the Lincoln Memorial, creating a local landmark that’s made national headlines.

In conversation with Fox News, the artist shared how the vision came to life, why Honest Abe strikes a chord and tips for kids on how to step up their snowman game at home.

At 14-feet high, the Lincoln homage is the largest snow sculpture Schott’s ever made. The task took about 60 hours total, between Schott and a 10-person crew. The mission began on Jan. 31 as snow began to fall, with the deployment of an 8-by-8-by-4-foot plywood form, to catch the flurries and contain snow shot from a snow blower. The snow kept falling, and a second tier, measuring 6 by 4 by 4 feet, was brought out Tuesday. 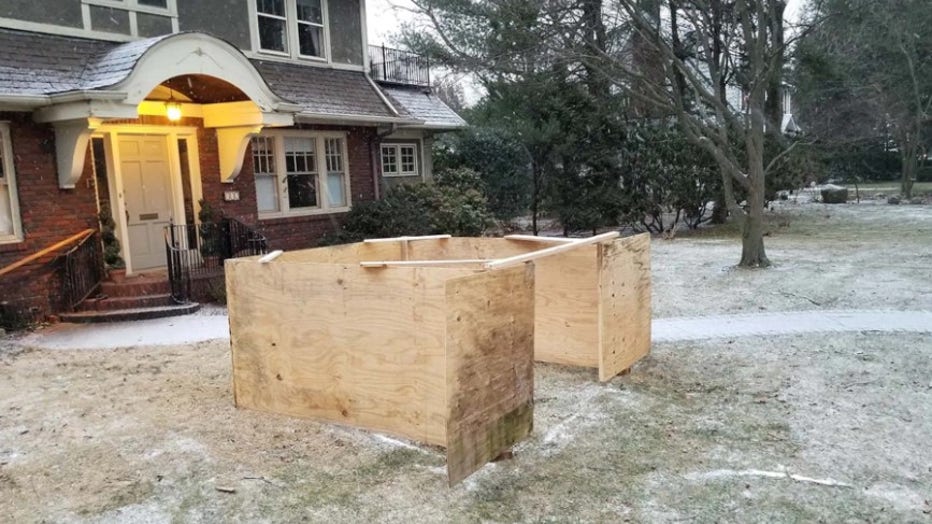 With a little help from two plywood tiers, Schott constructed a remarkable rendition of the iconic statue of the 16th president at the Lincoln Memorial. (Robert Schott)

By Wednesday, Schott started shuttling snow "by hand" to the top of the mound and hit the all-important 14-foot mark.

"I’d climb up the ladder, plop the snow on the pile, climb down the ladder, go get another shovel full, do that about 100 times," he laughed. "It’s a lot of steps!"

"I get the pile up there, and I have my design with me on paper, and I start to sculpt it, from top down. That way, the top is the first thing that becomes identifiable, which is kind of nice," he explained. 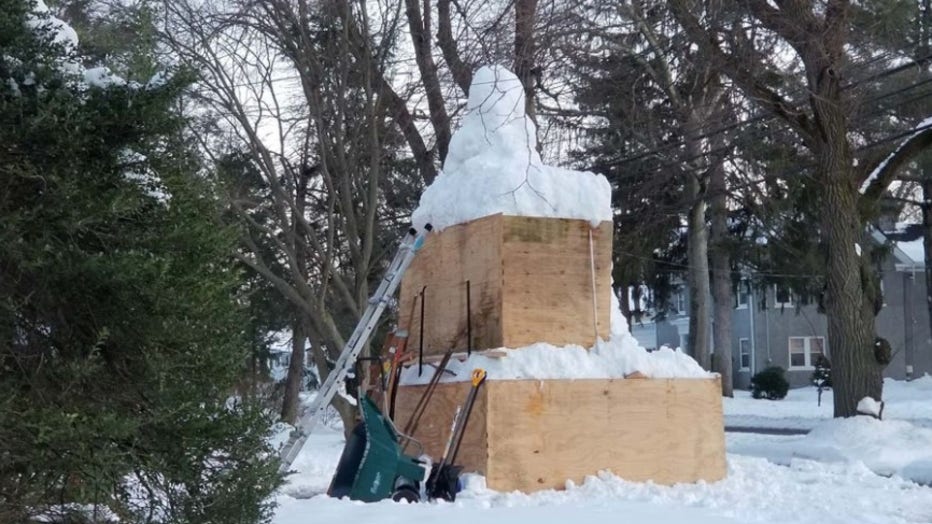 The task took about 60 hours total, between Schott and a 10-person crew. (Robert Schott)

After many hours of carving and shaping, Abe’s head and shoulders became clear on Thursday night. On Saturday, Jan. 6, the snowy ode was complete.

Inspired, Schott said he imagined the Honest Abe art about five years ago, and had been hanging on to the plywood forms for four years, waiting for the right weather. 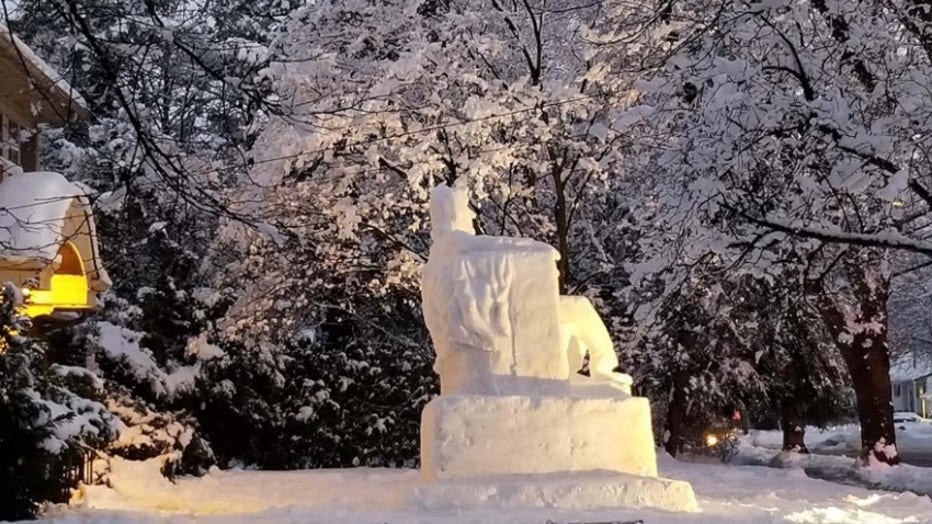 After many hours of carving and shaping, Abe’s head and shoulders became clear on Thursday night. (Robert Schott)

"I intended for it to be built during the crazy election, the campaigns with Trump and Clinton, in 2016. The idea of it was, 'let’s be more civil and let’s think about what’s important, and the principles of leadership,'" he said. "That was what was on my mind. But we didn’t have a proper snow since then, so it never got built."

The stars aligned at last this month, and even in time for Lincoln’s birthday on Feb. 12. Serendipitously, it all (literally) fell into place, with 20 inches of snow and four warm days in the 30s. As of this writing, Schott said his Honest Abe "is holding up fantastic." 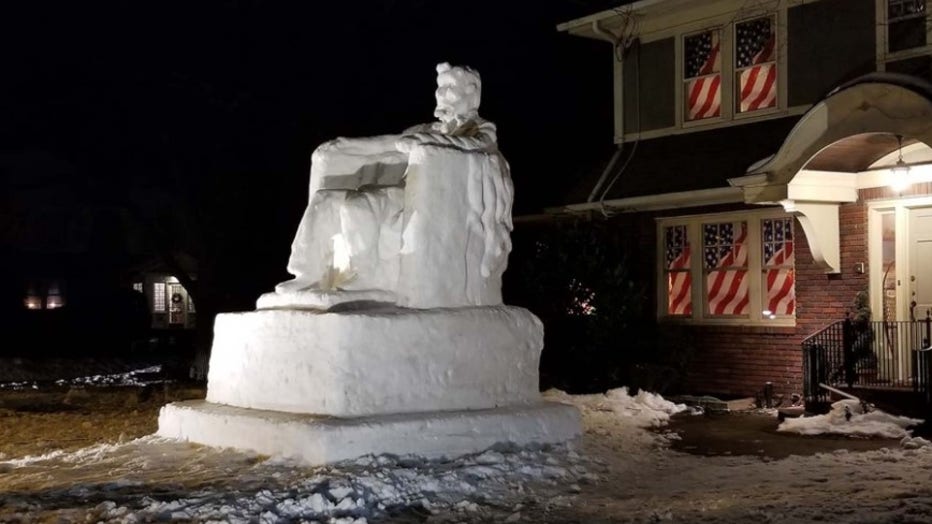 The stars aligned at last this month, and even in time for Lincoln’s birthday on Feb. 12. (Robert Schott)

Regarding the carving’s celebrity, Scott said it’s much more than Lincoln’s sheer size that seems to strike people.

In a word of advice to ambitious kids eager build their own snow sculptures at home, Schott shared some useful pointers.

"After a good snow, you want the temperature to be probably between 35 and 45 degrees with the sun hitting it, which makes it good for packing the snow. My process is to fill snow into a wheelbarrow, and dump it, because the act of doing that packs it down already," he revealed. It’s helpful, too, to have a physical object as a reference.

"You want to make a frog, get a toy frog and look at the frog. Then, do some measurements. Because if you get those measures right, it will start to look like what you’re thinking."

From there, basic gardening tools and a shovel are all you need to get going and bring your snow-day dreams to life.

"A lot of it is shaping with your hands," Schott said. "I do wear comfortable gloves with heavy-duty rubber gloves over them. That’s really key, staying dry."

With chilly temperatures forecasted and fingers crossed that the amazing Abe can stand in icy glory for a few more weeks, the artist is proud of the greater impact.

"It just gives me such pleasure, how much joy it brings to our community," he shared. "It’s more than just staring in awe of something, it's people genuinely appreciate that ‘bright spot' in the winter.’"