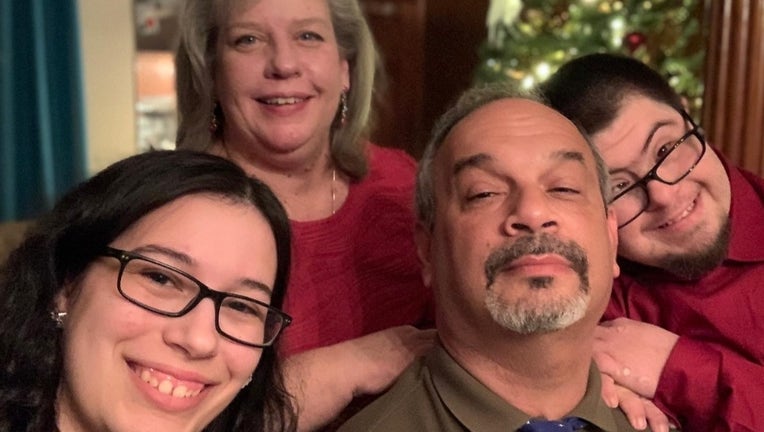 KEARNY, N.J. - For almost 30 years, they were inseparable — the devoted mom and the son whose world revolved around her.

Death, it turned out, would be no different. Carolyn Martins-Reitz died of the coronavirus last month, and just over a week later, so did Thomas Martins.

“I find some peace knowing that he's with her," said Joni Lewin, who's Martins-Reitz's lifelong best friend and Martins' godmother.

Martins-Reitz, 55, of Kearny, New Jersey, was the primary caretaker for her nearly 30-year-old son, who had Down syndrome. They both started struggling with symptoms of the virus toward the end of March, said Rudolph Reitz, Martins-Reitz's husband and Martins' stepfather.

He believes Martins-Reitz being taken to the hospital may have worsened his stepson's condition.

“What we believe accelerated his illness to the point of pneumonia was the unannounced departure of his mother with the house full of paramedics," Reitz said. “That was pretty traumatic for him to watch his mother be taken away."

Martins-Reitz — who had underlying health issues, according to her husband — died at a hospital on March 28; Martins followed on April 6, his 30th birthday.

EDITOR’S NOTE: This is part of an ongoing series of stories remembering people around the world who have died during the coronavirus pandemic.

Martins-Reitz, a talented artist who worked part time for the Archdiocese of Newark, was “one of the smartest, kindest, gentlest" people, said Reitz, her husband of 22 years. She was dedicated to her children — Thomas and his younger sister, Sharon Reitz — and to ensuring her son had every opportunity to thrive.

Lewin recalled how she and Martins-Reitz became instant friends when they met as young girls.

“We were inseparable for many, many years," she said.

She was there as Martins-Reitz advocated for her son to get into the learning program where she felt he would be happiest.

“When you have a child with Down syndrome, you always want to make sure your child gets every opportunity that they possibly can — she was a force in that area," Lewin said. “She just loved him dearly."

Martins was like his mother, Lewin said, “he developed her persona of being so kind and welcoming."

He “just loved life, he loved people," Reitz said, adding that his stepson loved “telling everyone about movies."

Lewin said her godson was “just a lovely light to be around, he had a very positive energy."

“Whenever he entered the room, it was like, ‘Thomas is here!'" she said.

The whole family was active in their church, St. Casimir in Newark, where Martins had been an altar server along with his sister, Reitz said.

Martins was already on a ventilator by the time his mother died, so he never knew she was gone, Reitz said.

Reitz and Lewin wonder if Martins made it to April to reach his 30th birthday.

“He was extremely excited for his upcoming birthday, making sure that we were going to be able to get him a party," Reitz recalled.

Despite his illness, Martins still received a celebration, with hospital staff getting deliveries of pizza and cake from the Felician School in Lodi, New Jersey, where he attended a program for adults with developmental disabilities.

“It's almost like his subconscious must have heard or sensed that, that night he passed," Reitz said. “He waited for his birthday."

Any memorial or Mass for mother and son will have to wait until social distancing restrictions have been lifted.

Then, Reitz said, their remains are likely to be interred in a vault or mausoleum — together, of course.

To help support the Martins-Reitz family during this trying time, you can donate directly to a GoFundMe set up for them -- here.

Coronavirus rates stabilizing, parts of US may be able to open in next few weeks: CDC

New Jersey to work with Pa, Del. and other states to reopen post-pandemic