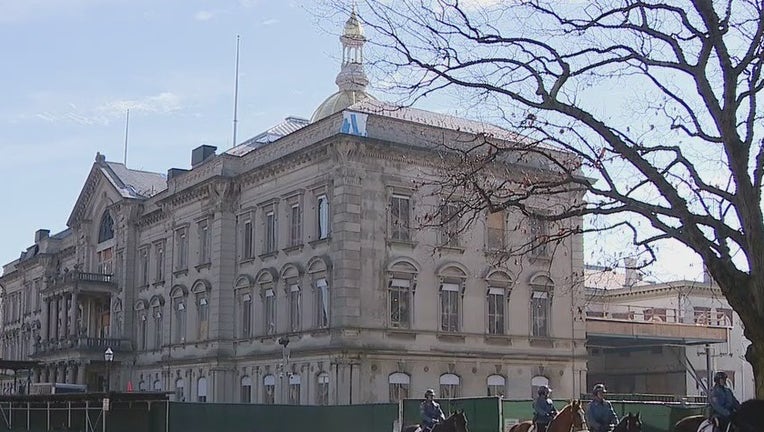 TRENTON - Disorder and confusion erupted in the halls outside the New Jersey Assembly on Thursday as several Republican lawmakers defied a new requirement to show proof of COVID-19 vaccination or a negative test and were blocked by state troopers— albeit briefly — from entering the ornate chamber.

Hours later, a state appellate court handed a victory to Republicans who had sued to block the proof-of-vaccination requirement, granting the GOP's application for a stay of the order and setting a potential hearing date for later this month. It was not immediately clear what effect the ruling would have on the requirement.

Ahead of Thursday's voting session, at least 10 Republicans strode toward the Assembly chamber on the first day the vaccine requirement was in effect. They were stopped by uniformed troopers for about 10 minutes before they eventually entered without showing any vaccination proof or a negative test. Troopers stationed at the doorway declined to provide an explanation.

"You have no right to stop us," Assembly member Erik Peterson said. "You see this? You see this, folks? Denying us entry into our house."

"This is America!" Assembly member Hal Wirths added. Lawmakers compared the situation to something that might happen in a dictatorship.

Moments later, some other Assembly members — who had earlier declined to show vaccination cards or a negative test — walked into the room unblocked. An email seeking an explanation was sent to the state police.

Later, what appeared to be close to the full 28-member Republican minority were sitting in their seats in the Assembly.

Democratic Assembly Speaker Craig Coughlin called it "a colossal failure of security" in a speech from the floor that chastised Republicans, saying that people throughout the state have made similar concessions during the pandemic. He said he was outraged.

"Twenty-eight members of the minority caucus could not be bothered to exhibit common decency and humanity all because they would rather have a couple of minutes on TV news," Coughlin said.

The display unfolded during the first voting session of the lame duck period, the timeframe between November's election and the start of the new Legislature in January. It was also the first time lawmakers gathered to vote since the requirement that anyone entering the statehouse complex show a negative test or proof of vaccination.

Tables with officials checking documents were set up at entrances around the complex, poster boards announcing the new policy stood on easels and state troopers milled around the building as well.

Some Republicans who flouted the rule said it was unenforceable, contending it ran afoul of the state constitution.

The first U.S. case of the new omicron COVID-19 variant has been detected in California, the White House announced Wednesday.

But others reluctantly abided by it. GOP state Sen. Holly Schepisi offered her vaccination card to troopers.

"I know you're just doing your job," she said before calling the requirement a derogatory term.

Late Thursday, Judge Allison Accurso of the Appellate Division issued a short order granting the GOP's application in a lawsuit aimed at stopping the order. The judge's order sets a possible hearing date of Dec. 13, and while it allows the suit to go forward, it doesn't address the underlying arguments in the case.

A message seeking comment was left with the attorney general's office, which will represent the joint legislative commission that set the requirement.

Kevin Drennan, the chair of the commission, declined through a spokesperson to comment on the suit earlier Thursday.

Democratic Gov. Phil Murphy has instituted similar requirements for state workers. On Monday, he decried the GOP's opposition to the statehouse rule as "reckless."

The disagreement comes as congressional Republicans opposed to President Joe Biden's vaccination rules in Congress are poised to stall a must-pass funding bill. The Biden administration has pursued vaccine requirements on several groups of workers, but the effort is facing one setback after another in legal cases.