During the procession for a fallen Alabama police officer, someone captured a photo of a man kneeling in the pouring rain to pray as police vehicles drove by.

MONTGOMERY, Ala. - During the procession for a fallen Alabama police officer, someone captured a photo of a man kneeling in the pouring rain to pray as police vehicles drove by.

Tim Evans posted the photo of the man who appears to be praying to his Facebook which has now amassed over a thousand shares.

In Evans’ post, he explains that he did not know the man kneeling.

“But this one man really caught my attention,” wrote Evans. “I don’t know who this man is, but he knelt in the wet grass and prayed, his hand outstretched as each patrol car passed by. It was a very touching tribute.” 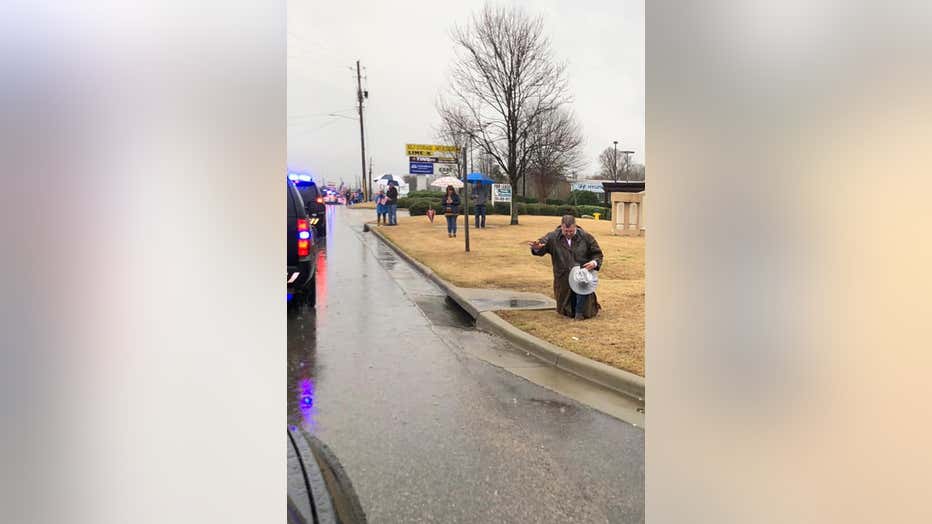 Someone posted a photo of what appears to be a man praying during a procession for a fallen police officer. (Tim Evans/Facebook)

Evans said, “O’Rear was a “good cop but he was even a better man. He died doing what he loved to do which is serving others. He will be missed by all who knew him.”

The Kimberly Fire Department also posted on Facebook honoring O’Rear. “This community lost a great man yesterday. To know Nick O'Rear was to love him. He loved this community, his family and his friends so much. He will be missed greatly and there will be a huge hole left in the heart of this community.”