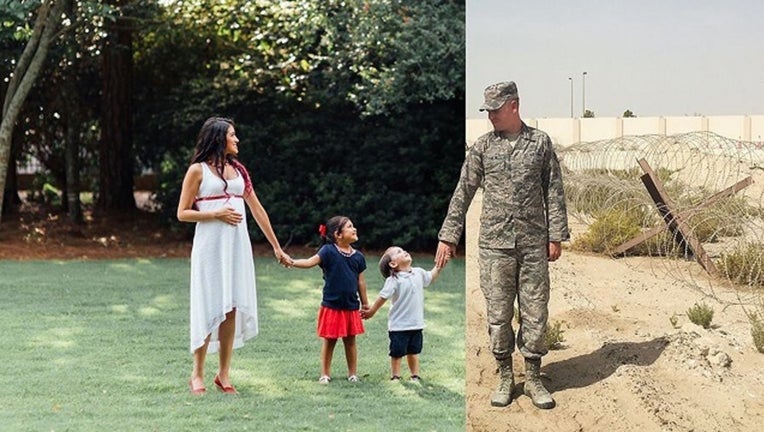 (INSIDE EDITION) - A South Carolina photographer has recreated a family photo to join a pregnant mom and her kids with her military husband who has been deployed overseas for three months.

So, when Gimlin, 26, came across a photographer in a local Facebook group offering a free photo shoot for military families with a deployed member, she jumped at the chance.

"The photographer had seen other photos with military husbands Photoshopped in and wanted to recreate something similar, but with a family," Gimlin told InsideEdition.com.

Gimlin, now 5 months pregnant, said it's been a rough road since her husband, who has served for 13 years, has been gone and having the photo as a keepsake is special.

The Saturday photo shoot was emotional for Gimlin and the couple's two children, 5 and 2.

The children looked at a picture of Richard on their mother's phone during the entire photo shoot, Gimlin said.

"It's been hard," she said. "It gets a little lonely being the only parent at home. We try to keep busy."

And when the image came in from Erin Marie Photography, Gimlin found it difficult to keep her composure.

"It was emotional to see the photo," she said. "It will be the picture we will always have to remember this time."

Gimlin, who was photographed with her husband on their wedding day by Sarah Ashley Lung Photography, said she knows other military families can relate to the sentiment of their latest picture.

"The photo made it more real to think about how far away he is. It's not just our family; it's every military family that has to deal with the separation, or missing the births of babies and just family time in general," she said.

The couple is expecting their son in November. Richard is also expected home that same month.

Gimlin said she's not sure if her husband will make it in time for the birth, but she doesn't want to get her hopes up.