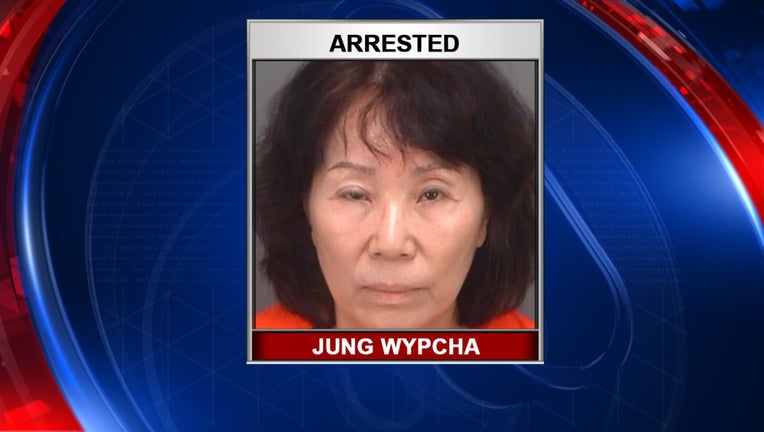 Indian Shores police arrested 66-year-old Jung Soon Wypcha after she was seen in surveillance video tampering with ice cream and supplies at Lu Lu’s Ice Cream and Candy Shop on at least three days in June, they said.

On the following day, police said Wypcha entered a back room to use the bathroom. When she exited the bathroom, they said she noticed boxes piled on top of the ice cream freezer, preventing her from opening it.

Police said she moved the boxes but was still unable to open the freezer, and she left the facility.

On June 22, Indian Shores police said she entered the back room to use the bathroom. However, there was a lock on the door, they said.

When she couldn’t open it, investigators said she grabbed one of Lu Lu’s ice cream buckets – used to churn their homemade ice cream – and urinates in it. They said she poured the bucket into a sink marked with the word, “rinse.” Officials said the sink is used to wash the ice cream folding utensils and mixing bowls at the shop.

After, police said she opened the ice cream freezer, put her hands inside and left the room. Police said the act was recorded on surveillance video on three different occasions on that day.

Police said Wypcha’s actions caused the business to get rid of $2,000 worth of product to “ensure public safety.”

Her arrest affidavit did not indicate whether she was a current or former employee, or a customer. Investigators said there was no indication of drug or alcohol influence, or any indication of mental health issues.

Officials did not give any details on a possible motive. Wypcha was arrested for tampering and criminal mischief. She bonded out of jail Monday night.