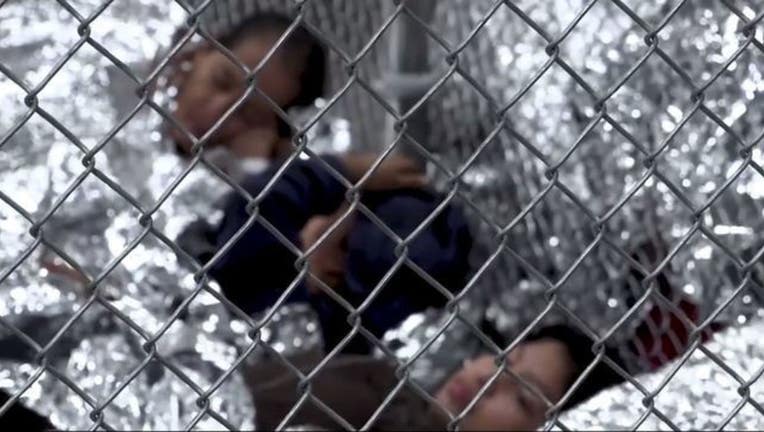 WASHINGTON - The top Republican and Democrat on a key Senate panel have agreed on a $4.6 billion measure to house and care for immigrant refugees flocking across the U.S.-Mexico border - a long-delayed step toward averting a humanitarian tragedy at overcrowded and inadequate federal facilities in the southwest.

Sens. Patrick Leahy, D-Vt., and Richard Shelby, R-Ala., will unveil the measure at an Appropriations Committee session Wednesday, aides to the duo said. A bipartisan vote is expected and both sides hope the measure can pass both chambers next week, just in time to replenish federal humanitarian aid coffers before they run completely dry.

The legislation comes as record numbers of migrants are traveling to the border.

"This is a humanitarian crisis of gargantuan proportions. It needs to be dealt with and I hope we're going to see a sign of bipartisan cooperation in the Appropriations Committee," said Majority Leader Mitch McConnell, R-Ky.

Meanwhile, top-level negotiations over paying the country's bills and funding about $1.3 trillion in agency budgets are set to reconvene Wednesday, in an effort to head off a financial train wreck when a series of deadlines hit this fall.

The bipartisan budget talks are aimed at preventing automatic spending cuts threatening the top priorities of both Democrats and Republicans. McConnell and House Speaker Nancy Pelosi are taking the lead, along with Treasury Secretary Steven Mnuchin and Mick Mulvaney, President Donald Trump's chief of staff.

Wednesday afternoon's talks - on double-barreled legislation to set new "caps" on spending accounts controlled by Congress and also increase the government's so-called debt limit - are intended to set a more orderly fiscal agenda that would permit relatively routine passage of both spending bills and drama-free consideration of the debt limit legislation, required this fall to avert a market-rattling default on U.S. obligations like bond payments.

It won't be easy. An early burst of optimism after an initial round of meetings late month has faded. Democrats are moving ahead with legislation - also slated to pass on Wednesday - that spends way more on domestic programs than Trump has requested, while curbing his Pentagon request.

Republicans have been exhibiting divisions among themselves, with pragmatists like McConnell, R-Ky., and White House hard liners like Mulvaney, a former tea party congressman, and budget director Russell Vought struggling to get on the same page. Trump hasn't displayed much interest in the talks, which come six months after he started a 35-day partial government shutdown following lawmakers rebuffing his border wall demands.

McConnell is also a leading force in the budget and debt talks. House Democrats are going ahead with spending bills, but all sides are working on a separate track to strike a deal on the overall amount of money to be allocated for defense and nondefense appropriations this year.

Without an agreement, another round of automatic cuts to government spending called sequestration would strike early next year, cutting $70 billion from current levels for the military and another $55 billion from nondefense programs.

The muddled picture has sparked concerns of another government shutdown, the return of an automatic $125 billion in spending cuts to the Pentagon and domestic agencies, and a first-ever default on U.S. government obligations like interest payments.

Largely unnoticed amid the tumult is a Wednesday floor vote on a $1 trillion House spending bill that sets out a marker by Democrats for the upcoming negotiations of the line-by-line spending bills required to fund the government. The Senate has yet to begin its painstaking work on the legislation since McConnell and Senate Appropriations Committee Chairman Richard Shelby, R-Ala., are seeking an overall broad agreement on the "top line" figures for both the Pentagon and domestic programs.

The House bill blends military spending dear to Republicans with education, health, and energy and water programs that enjoy bipartisan support. But the measure far exceeds Trump's budget request for domestic programs, attracting a White House veto threat, and contains policy "riders" related to abortion and other hot-button issues that will drive away any potential GOP support, though Democrats sidestepped a potentially divisive battle over taxpayer-financed abortion.

Action on the measure comes as Democrats have been struggling to get their message out above the political din of Trump's Washington. The bill wraps four of the 12 annual spending measures into one, and Democrats are boasting of gains for head start, health research, and fighting the opioid epidemic, among the myriad programs covered by the measure. It also contains provisions to block Trump from reassigning military appropriations to fund his border wall, and contains significantly more money for family planning, pre-school education and child care, and research into dangerous diseases.